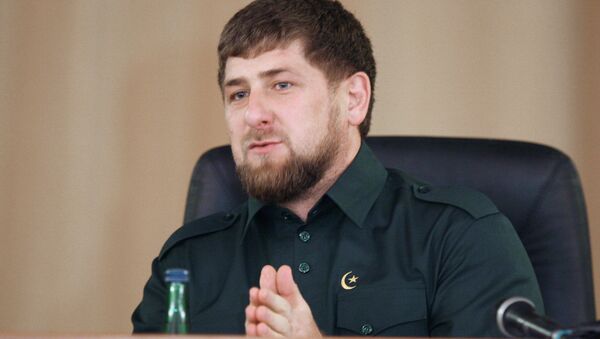 Ramzan Kadyrov, head of Russia’s Chechen republic, believes it is wrong to call the ISIL militants "Islamic State," as they have nothing in common with the teachings of Islam.

2,000 Russians Gone to Iraq, Syria Including to Join ISIL
GROZNY (Sputnik) – Ramzan Kadyrov, the head of Russia’s Chechen republic, claims he has reason to believe that the Islamic State (ISIL) militant group considers him "enemy number one" and has made plans for his assassination.

"I am enemy number one for them, they are preparing people…to kill Kadyrov. If they could, they would have done it earlier," Kadyrov told RIA Novosti in an interview.

According to the Chechen leader, it is wrong to call the militants "Islamic State," as they have nothing in common with the teachings of Islam or the proclamations attributed to Prophet Muhammad.

"They have established themselves as a powerful organization, they have everything – money, weapons, enough experts, so we need to be cautious," the Chechen leader said.

Islamic State militants lie to Muslims when recruiting them and Islamic figures must counter this propaganda, Kadyrov said.

He said that in the struggle against ISIL, propaganda is more important than a military operation. "They [ISIL militants] claim that it is from the Koran. Muslims make mistakes, I do too and everyone does, and they exploit these sentiments in every region. [Their messages say] look, they are bad and we are good," he said.

"We have…very well prepared experts, Islamic scholars, who are deeply aware of how dangerous it [ISIL propaganda] is, who know what Koran says about them, what the hadiths of the Prophet say. We should unite with them, hold conferences, youth meetings, dialogues. We should work a lot to stop this evil."

Brussels Court Sentences 30 ISIL Recruiters to Terms Up to 20 Years
Kadyrov added that Iran, Saudi Arabia and the United Arab Emirates could also influence the situation, provided that they distance themselves from Western anti-ISIL strategy.

"The only one [country] that can become a neutral authoritative figure with a status and power and capabilities is a Russia represented by President Putin. If he undertakes this, we will reach peace and settle this," Kadyrov said.

The Islamic State militant group is predominantly active in Syria and Iraq, where it has seized large areas in 2014, committing many human rights atrocities in the process. The group has many offshoots in other countries, and numerous militant organizations pledged allegiance to it.

Last month, the Russian Interior Ministry said that more than 400 people from Chechnya had left home to join ISIL militants in Syria.