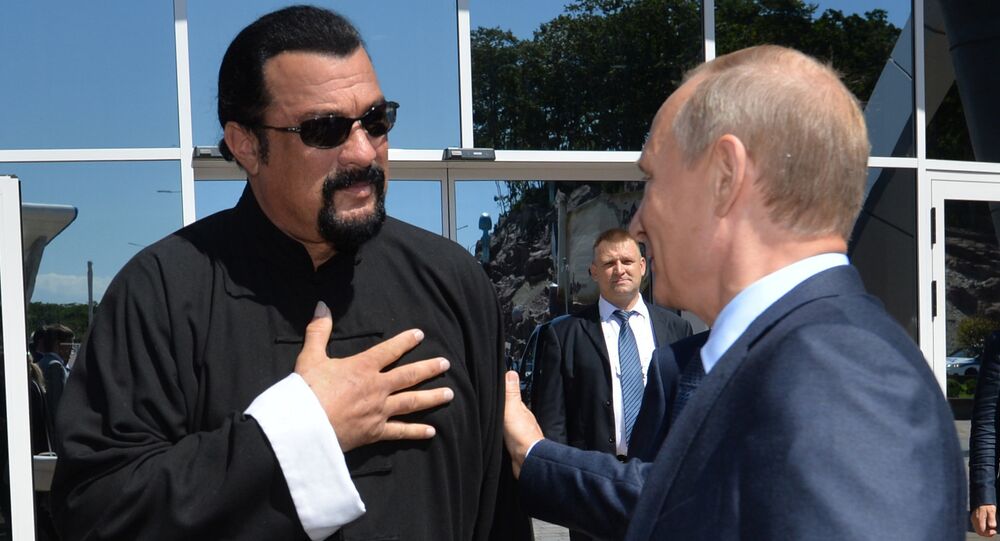 The initiative was proposed by Yana Lantratova, the head of the Russian Union of Volunteers, a group promoting civic initiatives across the former Soviet space.

In the letter, cited by Russian newspaper Izvestia, Lantratova explained that the American legends have "incontestable authority," popularity and respect among Russia's young people, and that they could become some of the campaign's key faces. She emphasized that "these figures are honored athletes who are known to be followers of a healthy lifestyle, and they respect Russia."

In a separate letter to Jones and Seagal themselves, Lantratova noted that "our task is to consolidate in the minds of young people a clear link between the healthy lifestyle which you lead with the outstanding results you have achieved in your sports and film careers."

© Sputnik / Artem Kreminsky
The Presence of Greatness: Roy Jones Jr. May Anchor Russian TV (VIDEO)
Jones' and Seagal's representatives told Izvestia that the public figures will give serious consideration to the offer. Timothy Brick, Seagal's representative in Russia, noted that the actor is likely to accept. Jones' Russian promoter, Vladimir Hrenov, suggested that Jones too is likely to support the initiative, noting that in the course of their 10 year friendship, he has never seen the boxer drinking.

The initiative also proposed using legendary Russian wrestler Alexander Karelin, boxing great Nikolai Valuev, Ukrainian-Russian mixed martial artist Fedor Emelianenko, and others. Karelin has already voiced his readiness to participate. "I am ready to participate. We need to find arguments to create a civilized culture when it comes to the consumption of alcohol," he noted.

Lantratova explained that the choice of public figures for the proposed campaign was based on a survey of volunteer activists from the Russian Union of Volunteers and associated organizations involved in projects aimed at preventing alcohol and drug abuse among adolescents.

YouTube/@Ruptly TV
Russia and America Need to Get Along - Steven Seagal
Seagal and Jones are well-respected in Russia, not only for their professional boxing and film careers, but also as a result of their support for Russia in the current environment of tensions between Russia and the United States.

Rosalkogolregulirovanie, Russia's alcohol market watchdog, has announced plans to carry out a mass campaign promoting the measured use of alcohol, and is in the process of collecting ideas and materials for the campaign. Pending government approval, the campaign may be launched as early as later this year.

Russia and America Need to Get Along - Steven Seagal