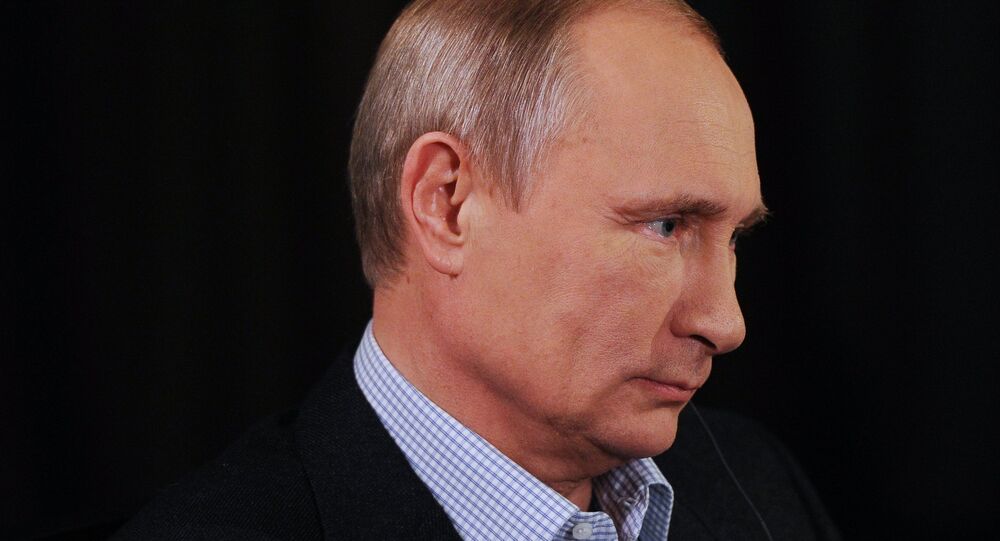 Russian Rossiya-1 TV channel aired a documentary titled "The President" dedicated to the 15th anniversary of Vladimir Putin's accession to the presidency on April 26.

© Sputnik / Michael Klimentyev
Putin to Talk About Most Dramatic Moments of His 15 Years in Power
The documentary is based on an interview by Russian TV presenter Vladimir Solovyov with Putin and focuses on landmark events in Russia's modern history over the past 15 years.

Russian President Vladimir Putin said in a documentary that the leaders of foreign states had told him that in the 2000s they had believed that Russia would stop existing in its borders after the situation in the North Caucasus had intensified.

"I read various documents while being the head of FSB [Russian Federal Security Service], including the interception of international terrorists' conversations, they wrote to each other 'It is a unique historical moment — we have an opportunity to rend the Caucasus off from Russia — now or never,'" the Russian president said.

"My colleagues, many presidents, prime ministers, told me then that they had decided for themselves that Russia would stop existing in its current form. The only question was — when it would happen and what would be the consequences. Meaning that it [Russia] is a major nuclear power."

© Sputnik / Andrey Stenin
Moscow Concerned Over Russians Fighting for Islamic State – Putin
The Russian leader added that then he had informed his American counterpart about this fact, however, in ten days Russian Federal Security Service (FSB) officials received a letter from their colleagues in Washington that the US would continue to maintain contact with all opposition forces in Russia.

"No way, one should never even try to use terrorists to solve his short-term political or geopolitical goals. Because if you support them in one place, they will raise their heads in the other and will certainly hit those who supported them yesterday," Putin said.

"Someone there [in the US], especially intelligence agencies of the Western countries, apparently thought that if someone acted in order to destabilize the main geopolitical rival, as we now understand they considered Russia, this move was for the good. It turned out that it was wrong."

Putin said that after the collapse of the Soviet Union Russia hoped that the West would treat the country differently, however, "there are also geopolitical interests that are not connected to any ideology."

"Our partners should have taken into account that a country like Russia has and cannot afford not to have its geopolitical interests, and that it was necessary to try to find balance and look for mutually acceptable solutions while treating each other with respect."

The Russian leader expressed gratitude to the Russian Armed Forces for their contribution to the fight against terrorism in North Caucasus in the beginning of the 2000s.

"If we did not have the military-industrial complex and the Army, we would not be able to overcome all the problems associated with the fight against international terrorism. Even in the most difficult times for our economy, in the early 2000s, we did not just get an army of a total of 1,300,000 people together, we got 50,000 combat-ready units together," he said.

What is it Like to Be the President of Russia?

Putin who has been serving as Russia's President for about 11 years said that a person does not have a normal everyday life if he is a head of a state.

"It is impossible to live like this, like a normal person lives. You cannot go to watch a movie, you cannot just go to the theater, you cannot go shopping. Well, that is not without a certain meaning and some pleasure."

He noted that "this is a small loss compared to what the fate and the people give those who are in my place, this is to make a maximal contribution, to do all that depends on me or on those who have the same job for the country and its people."

Putin said that he can imagine his life after the end of his presidency.

"If a man can return to living in an ordinary apartment, then, I believe, he had not lost touch with the outside world. I can imagine my life without this post."

"I would say that in general I am more or less satisfied by what we have done. Especially taking into consideration where we were. Well, let's start with the country, we have kept [the integrity of] the country and the GDP has grown twofold," the president said.

Putin also noted that the demographic situation in Russia has improved significantly since the times he had come to power.

"In 1999 and in 2000, the natural decline in the population was 929,000 people, that is almost a million. A million of people more died than it was born. If we had continued losing a million a year, Russia … would have gradually stopped to exist. We did not only stabilize the situation, but we changed it. For two consecutive years now we have natural population growth. Nobody believed it is possible," he said.

© Sputnik / Konstantin Chalabov
'Crimea - Way Back Home' Film Documents Historic Homecoming (VIDEO)
Vladimir Putin stressed that Russia could not leave the Crimean people who were seeking to return to Russia and did not want to be ruled by extreme nationalists who had come to power in Ukraine.

"I told them [the Western leaders] that the people are a vital issue for us. I do not know what interests do you protect, but we are defending our [interests] until the end. And this is an extremely important thing," Putin said.

"I believe that we did the right thing, and I do not regret anything."

Putin is convinced that Russia is not violating any rules and is acting in accordance with the international law.

"But the so-called rulers, political and economic elites of these countries love us only when we are poor and are begging with an outstretched hand. As soon as we begin to speak about our interests, they feel geopolitical rivalry."

"I am deeply convinced that we do not violate any rules of the game. When I say the rules of the game, I mean, first of all, international law, the Charter of the United Nations, and all that is connected with it. This refers to our relations with Ukraine, it refers to the situation in Crimea, it refers to our efforts with regard to the fight against international terrorism in other regions of the world," Putin said.

Sanctions as an Attempt to Contain Russia

Sanctions are an attempt to contain Russia, Vladimir Putin said.

"We see these attempts during all the history of Russia since the Tsarist-era. This attempt to contain Russia is known for a while, for centuries. There is nothing new in this. We do not have to worry."

The West starts to antagonize Moscow's attempts to speak about its concerns regarding NATO's eastward expansion and the alliance's military infrastructure near Russian borders, the Russian president said.

"And today it has taken such a form that we see. The so-called sanctions," he said.

Vladimir Putin served as Russia's Prime Minister from 1999 to 2000. On December 31, 1999, he became acting president after his predecessor Boris Yeltsin resigned unexpectedly. Putin won the subsequent 2000 presidential election and served as Russian president from 2000 to 2008. After serving as prime minister from 2008 to 2012, he was re-elected to the presidency in 2012.