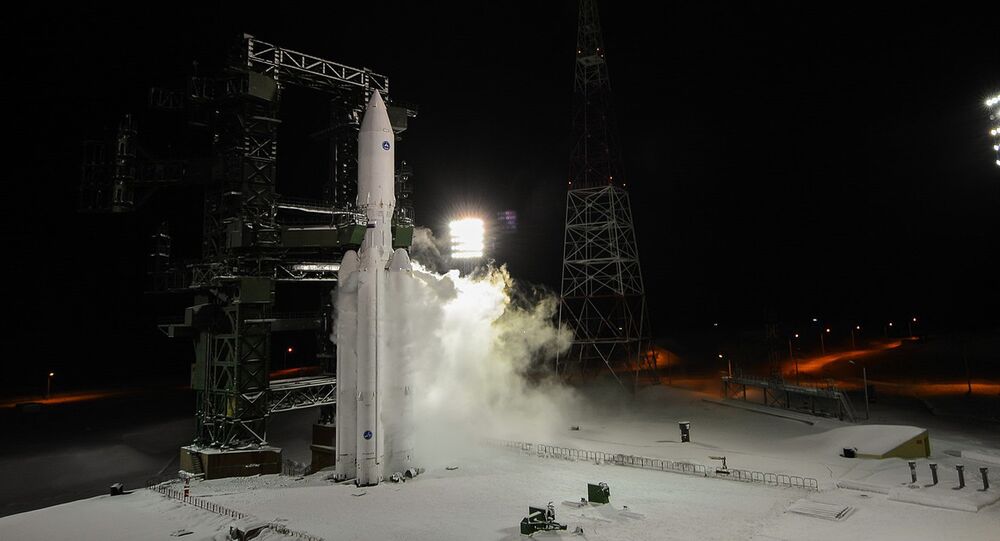 The Angara-A5 heavy rocket was launched by a Space Forces crew from the platform of the Russian Defense Ministry's state test facility in Arkhangelsk Region; the successful launch has already been named a significant milestone.

The collapse of the USSR in the beginning of 1990s resulted in dissolution of the Soviet airspace industry infrastructure: plants and design bureaus located in former republics were divided from Russia by new interstate borders. The state became highly dependent on its neighbors, particularly Ukraine, where space boosters were produced and maintained. Furthermore, Ukraine has been providing technical support for Russia's space launch vehicles as well as intercontinental ballistic missiles. For decades Russia has been unable to substitute Ukrainian Zenit, Dnepr and Cyclone rockets. For instance, Zenit-3SL has become a key component of ambitious "Sea Launch" project – a mobile maritime platform designed to launch commercial payloads from equatorial waters. Meanwhile, Cyclone rockets, made in Dnepropetrovsk, have already been launched from the Plesetsk Cosmodrome more than 120 times, according to Russian Ministry of Defense. Evidently, the Russian and Ukrainian space and military industries still have strong ties, due to the Soviet legacy. However, in the light of the ongoing political and economic crisis in Ukraine, Russia's independence in space industry has become the issue of primary importance.

"At 08:57 Moscow time (11:57 GMT), the heavy-class rocket Angara-A5 was launched by a Space Forces crew of the Arkhangelsk Region from the universal launch site of the state test facility of the Russian Defense Ministry [the Plesetsk Cosmodrome],” the official statement reads, as cited by RT.

President Putin, who was monitoring the launch from Moscow, congratulated Defense Minister Sergey Shoigu and his counterparts on the success of the operation. According to the plan, the rocket should deliver a dummy two-ton payload to geostationary orbit, 36,000 kilometers above the Equator.

© Photo : Press-service of Russian Defence Ministry
Russia's Angara Rocket Delivers Dummy Payload to Orbit in Maiden Launch
The Angara-A5, a heavy-class rocket, weighs 773 tons and can carry a payload of up to 25 tons. The largest rocket in the Angara rocket family is the Angara-A7, which weighs 1133 tons, and can deliver about 35 tons of payload to low orbit (193-220 km) and 7.6 tons – to geostationary orbit (more than 35,000 km).

The rocket is equipped with the advanced RD-191 engine, which uses fuel based on kerosene and oxygen, considered one of the most "eco-friendly" propulsion methods.

Earlier this year, Russia tested its "light" Angara 1.2PP rocket. Although the first attempt to launch the Angara 1.2PP on June 27 2014 was halted just seconds prior to take-off, it was successfully launched at the beginning of July.

© Sputnik / Vitaly Belousov
Russia Plans to Launch 5 Angara Heavy Rockets Per Year by 2025
The Angara is Russia's first airspace rocket created since the collapse of the Soviet Union. The project was designed by the Moscow-based Khrunichev State Research and Production Space Center and includes every type of booster needed for Russia's future space projects. It took almost two decades and about $3 billion to develop the brand new rocket from scratch. Currently Khrunichev is able to produce about ten Angara-5 rockets per year and will increase the production "if there is demand," according to the first deputy director at the Khrunichev Center, Aleksandr Medvedev, as quoted by RT.

The new rockets will replace the outgoing Proton and Soyuz, built by the famous Soviet designer Sergey Korolev, as well as the Zenit, Dnepr and Cyclone boosters manufactured in Ukraine and currently used in the Russian space program.

It looks like Russia is gradually regaining its leading position in space. In November 2014, Roscosmos, the Russian space agency, announced it was considering the construction of a new orbital station from 2017, after fulfilling its obligations regarding the International Space Station. Along with the new Angara rockets, it will allow Russia to bolster its space exploration and to gain new competitive advantages, making the state's space industry completely independent and self-sufficient.