The recently rejuvenated military alliance between the US and Saudi Arabia could have enormous – and immediate – implications for the War on Yemen. 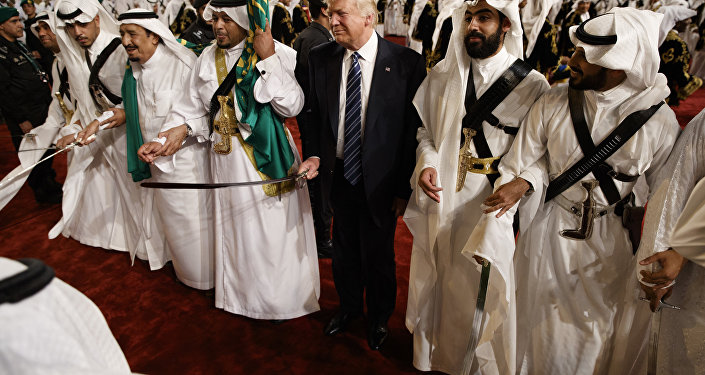 © AP Photo / Evan Vucci
Trump's Deal With Riyadh Sends 'Encouraging' Signal to Radical Islamists
The peninsular and impoverished country has been in a state of total warfare ever since the Saudis began a brutal campaign against them in spring 2015. The stated objective has always been to restore deposed former president Hadi to power, who fled to the Wahhabi Kingdom after the Houthi national liberation movement took control of the country, though the implicit motivation behind the war is commonly recognized by most analysts as being a proxy conflict to counter speculated Iranian influence. The Western narrative is that the Houthis are nothing more than a stand-in for Iran’s Islamic Revolutionary Guard Corps because of their shared Shia faith, though that assertion has been clearly debunked by the fact that the group enjoys broad cross-sectarian support all throughout Yemen.

Nevertheless, it’s geopolitically convenient for the US to scare its Saudi ally with the boogeyman threat of “Iranian encirclement”, which is what prompted the Kingdom’s young Defense Minister Mohamed Bin Salman to initiate the war in the first place. Trump made his anti-Iranian sentiment well known even before he entered into office, and his latest speech in Riyadh confirmed what many had already long believed – that the so-called “Arab NATO” which the US is trying to formalize in the region is really aimed against Iran. The Saudis already lead a 55-nation coalition that is ostensibly supposed to fight against terrorism, but which is now becoming the cornerstone of the US’ proxy plans against the Islamic Republic. Trump just agreed to the world’s largest-ever arms deal with King Salman for $110 billion, with the potential to raise it up to $350 billion across the next decade, and the Saudis also said that their coalition allies agreed to contribute a total of 34,000 troops as a reserve force.

© AP Photo / SPA
Washington's Plan to Create Arab NATO Against Iran 'Doomed to Fail'
Considering the unlikelihood that the “Arab NATO” will be used against Iran directly, at least at this early stage of its formation, it’s pertinent then to contemplate whether it’ll be unleashed against Iran’s perceived interest in the region, Yemen, in exacerbating the war in that country, though with the calamitous consequences of worsening the humanitarian crisis there and creating new opportunities for Daesh and Al Qaeda to expand their gains.