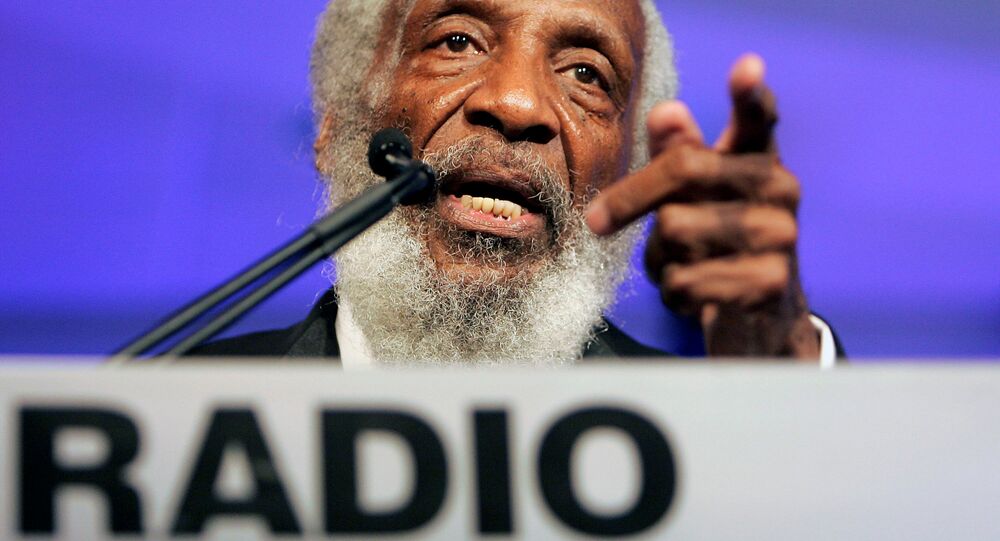 Stalwart activist and comedian Dick Gregory died Saturday at the age of 84. A contemporary of Martin Luther King, Jr, Malcolm X and Adam Clayton Powell, Gregory was renowned for his biting sense of humor, incisive commentary on political issues and his commitment to healthy living.

Radio Sputnik’s By Any Means Necessary speaks with Keith Silver, former special assistant to Dick Gregory, about Gregory’s legacy and how he was able to sustain a long career without compromising his principles.

​Silver said that he was "still somewhat in a state of shock" over Gregory’s death, but said he can see his influence even in current demonstrations, such as this weekend when an estimated 40,000 people showed up in Boston to protest a far-right "free speech" protest.

"The events in Boston spoke to the essence of Dick Gregory because he continuously fought for the downtrodden, for the bypassed and the polarized peoples of the world," Silver explained.

He described Gregory’s life as an 84-year long curtain call, because the comedian possessed a humility that wouldn’t allow him to hog the spotlight.

"If you didn’t catch him before he left (an event) he didn’t stick around for applause or standing ovation, he always cited the people who did the groundwork to pull these events off."

By Any Means Necessary host Eugene Puryear pointed out Gregory’s ability to strike at the heart of racial issues in his comedy, saying he had an "unbelievable ability to make light of so much of the racism that we face as black people but in a way that really touched people."

"His comedy came from his creative genius," Silver concurred, "he didn’t have time to script this out. He could speak on current events and be just as poignant, just as articulate, and he didn’t mind putting humor in there to break things up, but he could speak to the issue point blank.He was an authority on many subjects."

Gregory was well known for fasting for health and political reasons, and Silver noted that famed musician John Lennon credited Gregory for instructing him and wife Yoko Ono on a fast they conducted in protest of the Vietnam War and helping inspire his song "Imagine."

Ono and Lennon conducted this fast during a "Bed-in" where they spent extended periods of time lying bed as part of the demonstration. Silver recalls an amusing story Gregory told him where the prominent couple asked if he’d like to join them in bed, but he politely declined.