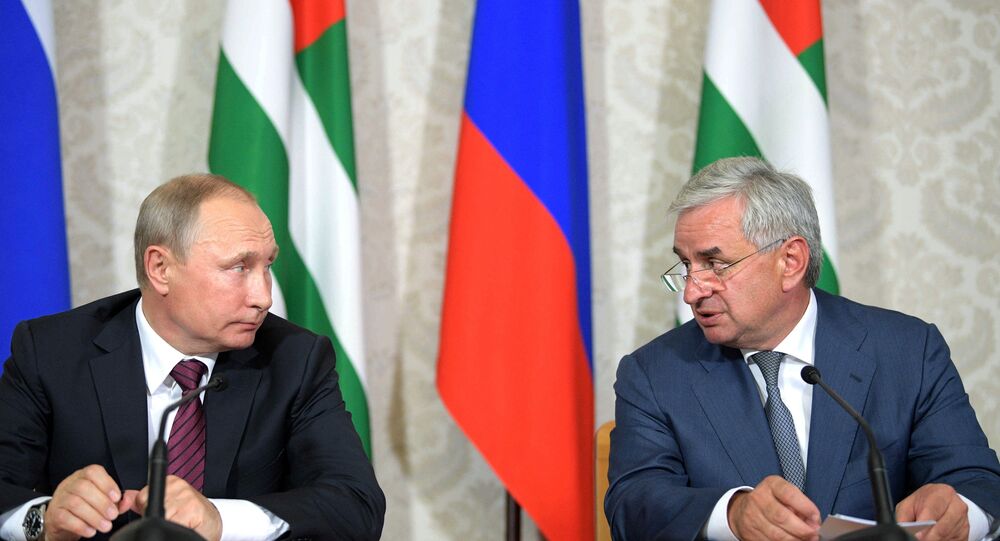 WASHINGTON (Sputnik) — She added that the US fully supports Georgia's sovereignty and territorial integrity within its internationally recognized borders and rejects Russia's recognition of Abkhazia and South Ossetia.

"The United States views the visit of President Putin to the Russian occupied Georgian territory of Abkhazia as inappropriate and inconsistent with the principles underlying the Geneva International Discussions, to which Russia is a party," Nauert said on Wednesday.

"The United States urges Russia to withdraw its forces to pre-war positions per the 2008 ceasefire agreement and reverse its recognition of the Georgian regions of Abkhazia and South Ossetia," Nauert said.

© Sputnik / Valeriy Melnikov
Russia, Abkhazia Agree to Enhance Security Cooperation in Caucasus - Putin
Abkhazia and South Ossetia declared independence from Georgia in the early 1990s. In August 2008, Georgia launched a military offensive against South Ossetia and partially destroyed its capital. Russia sent troops to South Ossetia trying to protect local residents, many of whom had Russian citizenship. After five days of hostilities, Russia managed to expel Georgian troops from the breakaway region. In late August, Russia recognized independence of Abkhazia and South Ossetia.

On November 21, 2015, Russia and Abkhazia signed an agreement on joint group of forces. On November 22, 2016, Putin signed the federal law on ratification of the 2015 agreement.

Leave Us Out of It: EU Commission Refuses to Get Involved in US-Russia Spat