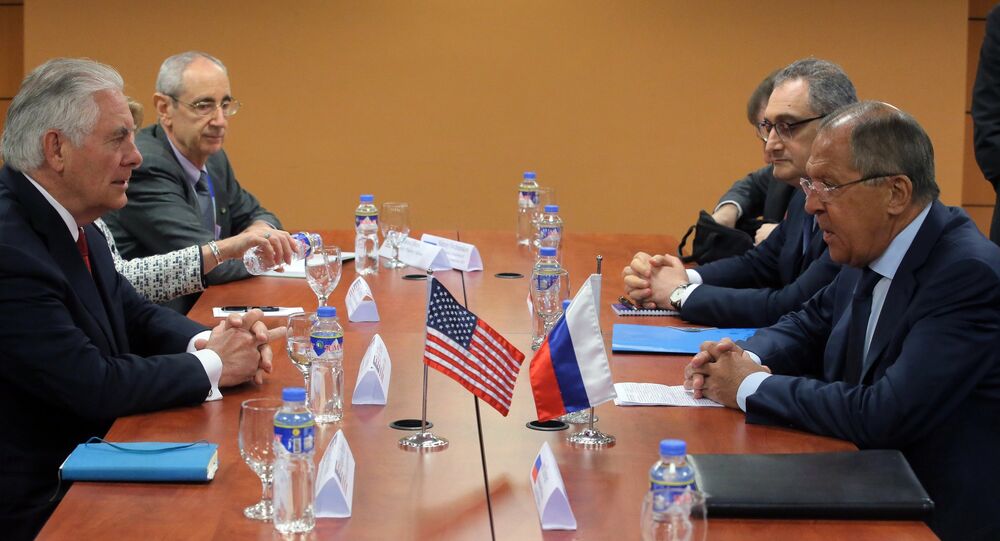 Russia Hopes for Continuation of Contacts With US Over Syrian Settlement

Moscow hopes for the continuation of the contacts with Washington on the regulation of the crisis in Syria, Russian Foreign Minister Sergey Lavrov said Sunday.

MANILA (Sputnik) — Lavrov told journalists after the meeting with US State Secretary Rex Tillerson on the sidelines of the ASEAN forum, that the issue of the current state of affairs in Syria had been touched upon during the talks.

"The contacts between our representatives are also conducted in this area, including over the development of the agreement, reached by Russia, the United States and Jordan on the creation of the southern de-escalation zone in Syria. We hope that our contacts with the United States will continue also in relation to other aspects, both military and political, of the Syrian settlement. They have never been interrupted, " Lavrov said.

Earlier in the day, Lavrov met with his Turkish counterpart Mevlut Cavusoglu.

Russian Foreign Minister also stated that representatives of Russia, Turkey and Iran will meet in the Iranian capital of Tehran on August 8-9 to discuss Syrian settlement.

"With our Turkish colleague we discussed the situation with implementing agreements within the Astana process. We discussed preparations for the next meeting of representatives of Russia, Turkey and Iran, which will take place in Tehran on august 8-9, and during which the discussion of further strengthening the regime of de-escalation zones will continue," Lavrov told reporters after his meeting with US Secretary of State Rex Tillerson on the sidelines of ASEAN forum in Manila.

"The further steps to regulate the Syrian conflict have also been discussed, including the development of the Russian-US-Jordanian memorandum of creation of the de-escalation zone in southwestern Syria, agreed upon in July. Lavrov emphasized the need for the strict compliance with sovereignty and territorial integrity of this country, as well as the United Nations Security Council resolutions, which had formed the basis of the political process," the Russian Foreign Ministry said in a statement after Lavrov-Tillerson meeting.

The memorandum on the establishment of four de-escalation zones in Syria was signed in Astana in May, with Russia, Iran and Turkey acting as the guarantors of the ceasefire regime.