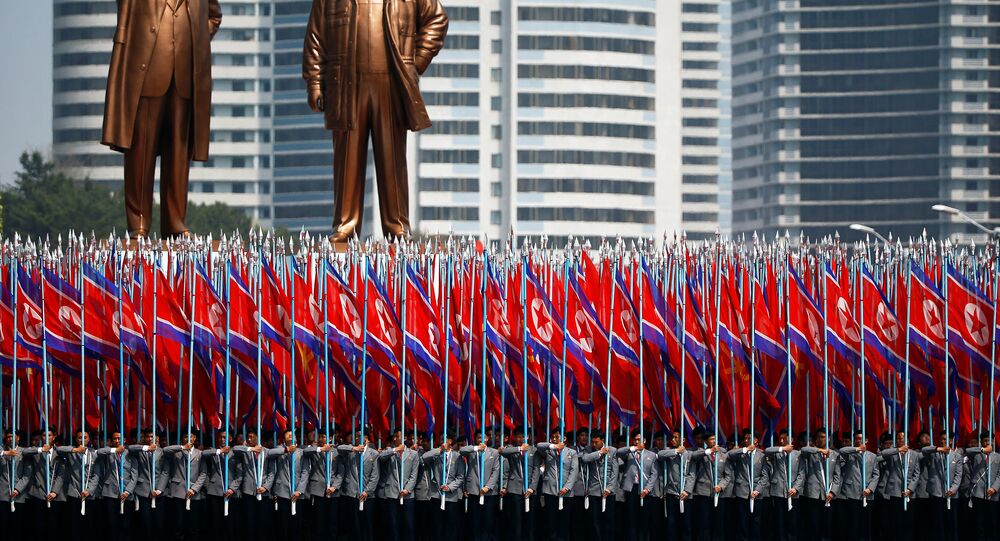 Renewed US sanctions on Pyongyang will only act as a prolongation of the country's long-standing policy of "economic aggression aimed at regime change" in North Korea, Dermot Hudson, a member of the New Communist Party of Britain and official delegate of the Korean Friendship Association (KFA) in the United Kingdom, told Sputnik.

MOSCOW (Sputnik) — Last week, the US Congress approved a bill introducing new sanctions on North Korea as well as Russia and Iran. The draft legislation is yet to be signed by US President Donald Trump.

"The people of the DPRK [Democratic People's Republic of Korea] have lived on and off under US sanctions and blockades for many years now … Washington likes to make out it's really about the recent missile tests but if you go back far enough you'll see they've always used sanctions against the DPRK as a form of economic aggression aimed at regime change," Hudson said.

© AFP 2021 / NICOLAS ASFOURI
'Growing Mistrust Between China and US' at Heart of North Korean Antagonism
In recent months, the United States has repeatedly voiced concerns over the security on the Korean peninsula. In a surprise move, the Trump administration recently made steps to also target China as part of their sanctions policy, with President Trump saying on Saturday that he was "disappointed" in Beijing because of their lack of help on the North Korean issue.

In late June, the US Treasury said sanctions had been imposed on a Chinese shipping company, two Chinese nationals and a Chinese bank for their financial ties to Pyongyang, and its nuclear and missile programs.

In 2016, the administration of then-US President Barack Obama enacted a law that allows the US president to impose sanctions on entities linked to Pyongyang's arms trade or weapons of mass destruction programs, as well as on companies involved in North Korea's mineral or metal trade. South Korea, Japan, the European Union and the United Nations have also imposed restrictions on Pyongyang.

© AP Photo / Richard Drew
Why US Sanctions Bill is the Last Straw for Russia, Iran, North Korea
Relations between North Korea and the United States have been particularly hostile, with diplomatic ties non-existent since the end of the Korean War in 1953. The conflict ended with an armistice rather than a full peace treaty, along with the permanent stationing of US military assets across South Korea.

Over three million people lost their lives during the Korean War, of which the majority were Korean civilians. Most of North Korea's urban areas were left in ruins after the US Air Force dropped about 600,000 tons of conventional bombs and over 30,000 tons of napalm.