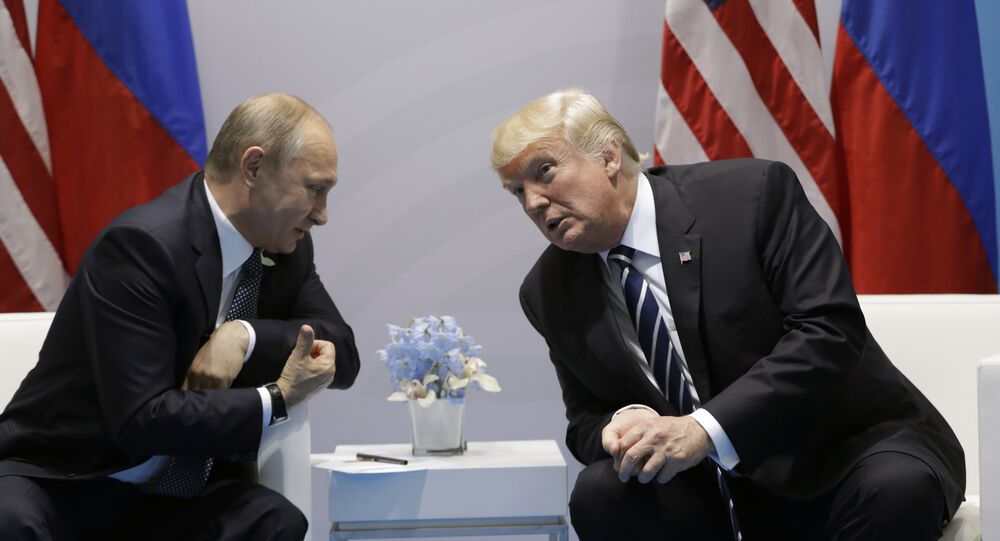 Russian President Vladimir Putin and US President Donald Trump discussed the issue of adoptions at the G20 summit dinner two weeks ago, Kremlin spokesman Dmitry Peskov said Thursday, following US media revelations of a second, undisclosed meeting on the G20 sidelines in Hamburg on July 7-8.

MOSCOW (Sputnik) — Peskov added that the dinner conversation between Putin and Trump was not a "secret meeting."

"I can confirm indeed this topic was touched upon. I cannot say more than that," Peskov said.

© Photo : pixabay
Russia Ready For Dialogue With US on Adoption Ban - Upper House Speaker
When asked whether the law banning adoptions of Russian children by US citizens could be reconsidered, the Kremlin spokesman said "this is not under discussion."

He also said that Putin and Trump did not discuss the US' arming and training of Syrian rebels at their meeting, when asked to comment on the reported end of CIA's arm-and-train program for Syrian oppositi forces.

US President Donald Trump and Russian President Vladimir Putin had an hour-long private conversation in Hamburg, Germany, at the G20 summit that until now had not been revealed, the president of the international consulting firm Eurasia Group told the Hill. While at a dinner table with G20 heads of states and their spouses, Trump got up from his seat to have a private talk with Putin.

© REUTERS / Steffen Kugler/Courtesy of Bundesregierung
Moscow Comments on Reports of Second, Private Putin-Trump Talks in Germany
The same day, a White House official refuted the claims, saying that Trump and Putin did not have a second meeting in Hamburg, but had a brief conversation at the end of a formal dinner. The official called the insinuation that the White House hiding the second meeting "false, malicious and absurd."

After the media reports have been released, Trump harshly slammed the coverage of his private talks with the Russian leader.

The Fake News is becoming more and more dishonest! Even a dinner arranged for top 20 leaders in Germany is made to look sinister!

​Putin and Trump met for the first time during the G20 summit in Germany's Hamburh on June 7. Putin said that he discussed at the first meeting with Trump the situation in Ukraine and Syria, the fight against terrorism and cybersecurity.

It is not yet known when exactly Russian President Vladimir Putin would meet his US counterpart Donald Trump after their first encounter earlier this month, Peskov noted Thursday.