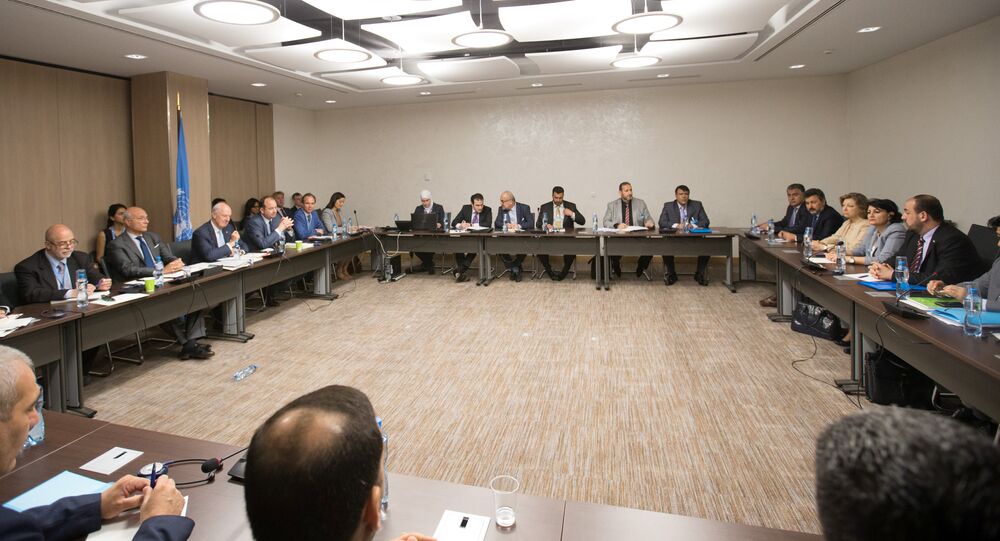 Russian Ambassador to the UN Office in Geneva Alexey Borodavkin said that Kurds should be included into the ongoing intra-Syrian talks in Geneva, and welcomed the ongoing consolidation between the Syrian opposition groups participating in the negotiations.

© REUTERS / Xu Jinquan/Pool
Geneva-7 Talks on Syria Bring Opposition Groups As Close Together As Never Before
MOSCOW (Sputnik) — The Kurds need to be incorporated in the Syrian opposition delegation at the intra-Syrian talks in Geneva as an important political and military force, as well as a part of the Syrian society, Russian Ambassador to the UN Office in Geneva Alexey Borodavkin told reporters.

Borodavkin stressed that the ethnic minority had a lawful right to be engaged in a decision-making process on Syria being an influential military force.

"First, they are Syrian citizens, they have a legitimate right to participate in decision-making on the future of Syria… Second, they are a political force… Third, they are very influential militarily, as you know, they are fighting now to liberate Raqqa," Borodavkin added.

He also praised the decision made by UN Special Envoy for Syria Staffan de Mistura to focus on counterterrorism during the talks, calling it a "very positive development".

"We have always supported the efforts of Special Envoy for Syria Staffan de Mistura, his team and his office. They show their recent determination to actively facilitate the negotiation process, as well as act in a balanced way, seek the way forward, bring up new balanced correct proposals," Borodavkin said.

Furthermore, the Russian envoy said that Moscow welcomes the ongoing consolidation of stances among the Syrian opposition groups participating in the talks, and noted that it may actually help open the path for direct talks between opposition and government delegations.

"I hope that by September three delegations [High Negotiations Committee, the Moscow Group and the Cairo Group] will manage to agree on a single constructive position that must be aimed at achieving an agreement with the governmental delegation on all four baskets of the negotiation process. If it happens, I think that will open the path for direct talks at the next round of the [Geneva] talks," Borodavkin said.

He also pointed out that the Syrian opposition High Negotiations Committee (HNC) stopped calling for the removal of Syrian President Bashar Assad during the talks.

"The opposition never mentioned the necessity of Syrian President Bashar Assad and the Syrian legitimate government stepping down during this round of talks. It seems that the radical opposition and its sponsors came to understand that, first of all, it is necessary to establish peace in Syria, and after that discuss political reforms… The opposition's aim has transformed somewhat," Borodavkin said, adding that the change of the opposition's stance was determined by the Astana talks, the G20 summit in Hamburg, as well as statements by countries engaged in Syrian settlement.

All in all, Borodavkin surmised, even though the seventh round of intra-Syrian talks in Geneva ended yesterday without any breakthroughs, "the negotiations went in a constructive manner, and there are positive results."