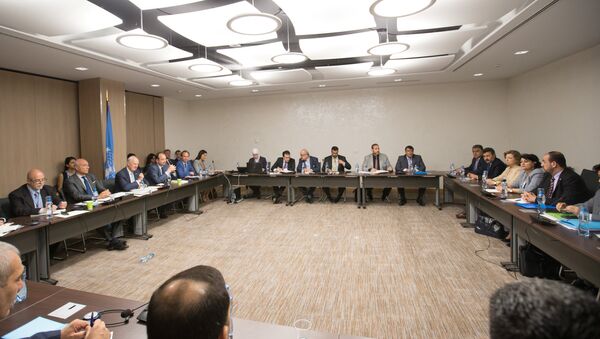 © REUTERS / Xu Jinquan/Pool
Subscribe
The seventh round of intra-Syrian talks in Geneva, which wrapped up in the Swiss city of Geneva on Friday, has managed to put three participating groups of Syrian opposition as close to the creation of a single, unified delegation as never before.

French-US Offer on Syria 'Should Not Undermine Astana, Geneva Talks'
GENEVA (Sputnik) — UN mediator Staffan de Mistura, initially did not have high hopes about Geneva-7. Just before the start of the round, at the conclusion of Astana international meeting on Syria last week, he told reporters that "it is always better to avoid over-expectations."

Failing to bring any fruits on the substance of the negotiations, which is the political settlement in Syria, these Geneva talks, however, moved forward format-wise.

There were times in Geneva, when the three participating groups of Syrian opposition – Riyadh-backed High Negotiation Committee, the Moscow platform and the Cairo platform – refused to even recognize each other’s right to exist and to be called an opposition force. At Geneva-7, not only did they participate jointly in technical meetings with UN experts, but they also had daily intra-opposition meetings, sometimes twice a day, to work out a common position.

As a result, they jointly agreed on 12 basic principles for a future Syrian constitution, proposed by de Mistura, at the expert level, and even reached general understanding among each other at the political level. Speaking to journalists on the results of the seventh round of talks, representatives of all the platforms said that a single opposition delegation would be formed very soon, most likely before the start of Geneva-8 in September, as the groups were willing to work on the unification issue between the rounds.

Another achievement of the Geneva-7 has been the crystallization of the two-level working format of the talks: general, or political, level and technical, or expert, level. The latter was the invention of the June round of talks, when UN experts started meeting separately with the Syrian government team and with representatives from all the opposition platforms together in order to discuss the new Syrian constitution.

At the Geneva-7, such technical meetings continued, but their agenda was extended to cover three other baskets of issues: anti-terrorism, governance and elections.

Hell Valley: Are Iran, Russia and N Korea Making Long-Range Missiles in Syria?
Although some opposition delegations’ members complained about this double-track model, it is probably the first thing, which actually made the platforms work together and discover that they have commonalities to work on.

The government delegation addressed only two topics at these technical meetings with UN experts: the fight against terrorism and the future constitution for the country.

At the general, or political level of the negotiations, the differences between the sides remained same as previously: the Damascus team wants to focus primarily and solely on counterterrorism, while the opposition representatives insist on a political transition.

The issue of counterterrorism, in general, has been high on the agenda at the Geneva-7 due to the international context in which the negotiations took place. It came just after the July 4-5 Astana international meeting on Syria, and the July 7 first-ever one-on-one meeting between Russian President Vladimir Putin and US leader Donald Trump on the sidelines of the G20 summit in Hamburg, where they discussed Syria thoroughly.

At the Astana talks, three ceasefire guarantor states – Russia, Turkey and Iran – with help of Jordan and the United States as observers tried to coordinate a whole range of specifics of the establishment of four de-escalation zones in Syria. They could not agree on all the details and sign a package of documents, but clearly committed to continue work at the expert level.

Immediately after the Trump-Putin meeting at G20, Russian Foreign Minister Sergey Lavrov told reporters that experts from Russia, the United States and Jordan had completed their work and agreed a memorandum on the establishment of a deescalation zone in southwestern Syria: in Daraa, Quneitra and As-Suwayda provinces. Thus, Russia and the United States pledged to ensure the implementation of the ceasefire in that region of Syria, starting July 9.

'A Wonderful Thing': France, US Make 'Serious Turnaround' in Syria Policy
Moreover, during a joint press conference with French President Emmanuel Macron on Thursday, Trump said that the United States and Russia were discussing the second ceasefire agreement in Syria. Macron said that Paris no longer insisted on the departure of Syrian President Bashar Assad, the key goal to be the eradication of terrorism instead.

These news inspired the Damascus delegation's head in Geneva, Bashar Jaafari, to call with renewed vigor on the international community, through his address to de Mistura and journalists, to engage seriously in the fight against terrorism in Syria, and to say that "any awakening in the Western capitals" regarding this fight would be welcomed.

The next round of the Geneva talks, most possibly, will take place in September, following a new high-level meeting on Syria in Astana during the last week of August. Odds that the Geneva-8 will be the first-ever round of direct talks between the Syrian sides, given the opposition platforms’ determination to unite promptly, grow.

000000
Popular comments
The ceasefire agreement is recognition that military opposition against Assad/Syria is very unpopular. Paris along with other western globalist interest will now attempt to reconstitute the Syrian government through these talks into a type of social reformist color model.