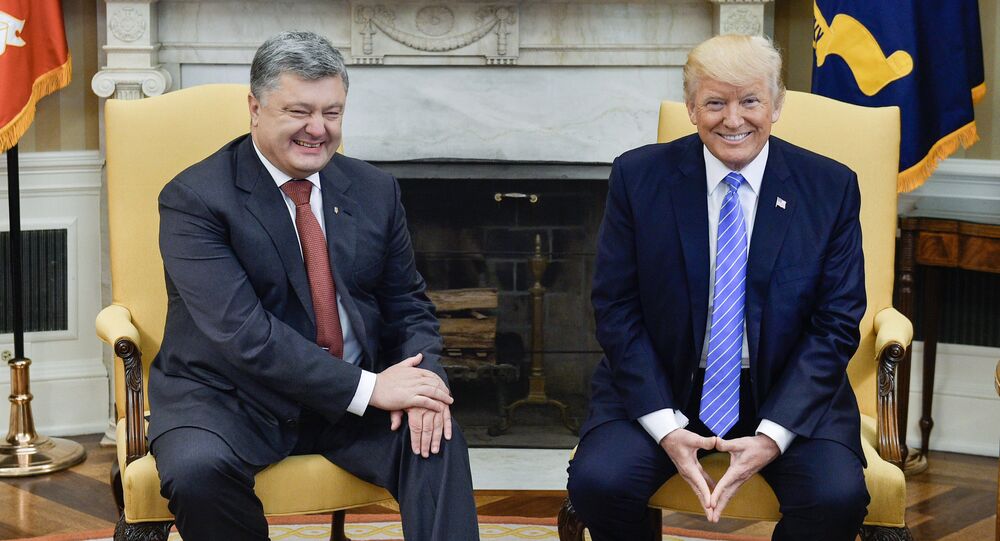 While his visit to the US and meeting with President Donald Trump were clearly a political success for Ukrainian President Poroshenko, it is unlikely to bring any tangible dividends to Ukraine.

During the meeting the two presidents apparently discussed a host of pressing issues such as the peaceful resolution of the ongoing conflict in Donbass, as well as reforms and the corruption problem in Ukraine.

The Ukrainian president even described Trump as a "strong friend to Ukraine," and appeared confident that the cooperation between the two countries will continue to expand.

However, it remains unclear whether Poroshenko’s visit to the US will actually bring any tangible benefits to Kiev.

Ruslan Bortnik, head of the Ukrainian Institute of Analysis and Management of Policy, told RIA Novosti that despite its outward success, Poroshenko’s voyage to the US is unlikely to bring in any serious political or financial benefits to Ukraine.

"The meeting, I believe, was a success for the Ukrainian President. Trump’s praise helps create a very good image for our President, for his return home. This is obviously a political success for him," Bortnik remarked.

At the same time, he pointed out that Poroshenko’s personal success doesn’t necessarily imply a success for Ukraine and that the US will likely stick to supportive rhetoric rather than provide any additional aid.

"Will it result in any positive developments for Ukraine? I doubt it. I think that this rhetoric is unlikely to translate into any tangible financial, political or military aid. Most likely, this is just a part of the game with Russia, an attempt to raise the stakes and to cause annoyance," Bortnik added.

Meanwhile, Ukrainian political analyst Mikhail Pogrebinsky said that the meeting in the White House between Trump and Poroshenko did not result in any breakthroughs as both sides apparently avoided discussing specific issues, sticking instead to general topics like the territorial integrity of Ukraine.

"I believe that Trump sought to avoid declaring his stance on the resolution of the conflict in Donbass, in order to leave room for negotiating a solution to this problem with President Putin," he remarked.

Pogrebinsky also noted that both sides apparently confirmed that there’s no alternative to the Minsk agreements, which he considers a “positive signal”.

Kremlin spokesman Dmitry Peskov said that Moscow does not intend to evaluate the results of the meeting between Poroshenko and Trump, stating that this is a job for "Ukrainian political analysts and US observers."