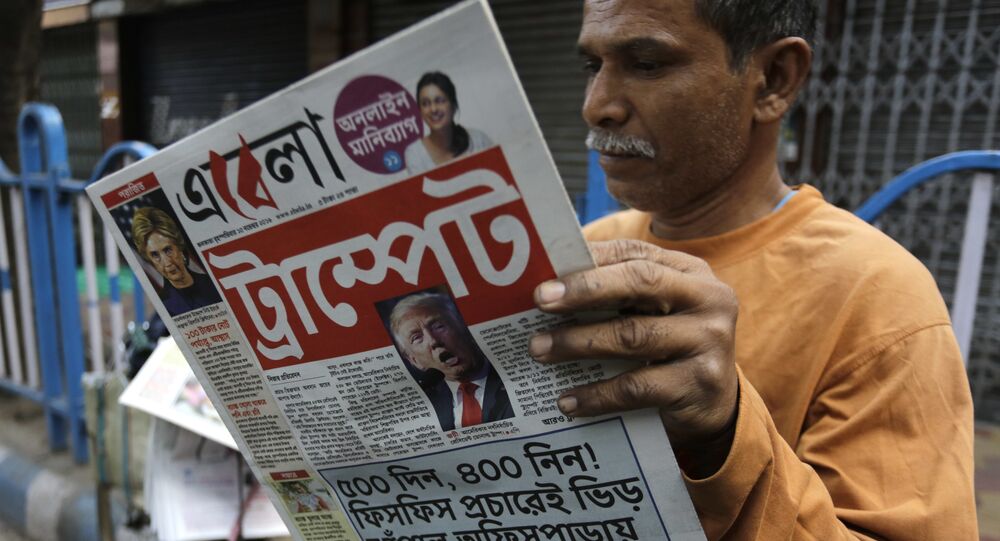 Upcoming Modi-Trump Meeting to Be an Exercise in Stress Management

Indian Prime Minister Narendra Modi is going to meet the US President on June 26 for the first time since Donald Trump's inauguration in January. The meeting comes at a time when India-US ties are under strain due to Trump’s protectionist, anti-immigration and anti-climate policies.

© AP Photo / Manish Swarup
India to Get 'Trump Village' Ahead of Modi Visit to US
New Delhi (Sputnik) – Indian experts said the first-ever Modi-Trump meet could turn out to be an exercise in stress management.

An external affairs ministry statement on Monday said that PM Modi will leave on June 25 for the US and hold bilateral level discussions with President Trump on June 26. The foreign ministry revealed that Modi and Trump would focus on “deeper bilateral engagement and multi-dimensional strategic partnership” while avoiding anything on the contentious H-1B visa issue.

“Their discussions will provide a new direction for deeper bilateral engagement on issues of mutual interest and consolidation of a multi-dimensional strategic partnership between India and the US,” the statement read.

The White House has said that President Trump and PM Modi would “set forth a vision” to expand the US-India relationship in a major way and discuss a range of issues including terrorism and India’s concerns over possible changes in H-1B visa rules.

“I think you can expect the two of them to set forth a vision that will expand the US-India partnership in an ambitious and worthy way of both countries' people," PTI quoted White House Press Secretary Sean Spicer as saying in his daily news conference.

Trump invited Modi to Washington after the latter called him in January to congratulate the new president on his inauguration.
Since then, Modi and Trump spoke three times on the phone, but until now, there were no meetings scheduled between the two leaders.

Lately, US-India ties have come under strain. In April, the Trump administration passed an executive order on visa rules, tackling the issue of what it calls the “visa abuse” under the H-1B head and its anti-immigrant stance. The new rules affect India and China in particular.

In June, Trump said India was getting favorable terms under the 2015 Paris Climate Change Accord, a claim which Indian External Affairs Minister Sushma Swaraj strongly denied.

Indian experts agreed that US-India ties have seen better days, pointing out that New Delhi must keep a close tab on issues in US domestic politics, which could affect bilateral engagement.

“There is no denying that India-US strategic partnership is under stress and PM Modi’s first summit meeting with President Trump will be an exercise in stress management. We also need to keep in mind the domestic politics of the US. India also needs to keep an eye on how the Trump administration is managing its ties with the State Department, which favors good ties with New Delhi,” Chintamani Mahapatra, Professor, Jawaharlal Nehru University, told Sputnik.

Experts said US-India relations go beyond visas or clashing positions on global issues such as climate change. The bilateral ties are warmer than ever before with all last four US presidents visiting India, compared to nearly an equal number of visits since the country’s independence in 1947. The US has also become an important defense hardware supplier, although nowhere near levels seen in Russia, in particular.

“The India-US relationship is comprehensive, based on mutual interests, grounded in common democratic values and security concerns and is a defining partnership of the 21st century,” Dr Ashok Sharma, Adjunct Faculty at the University of New South Wales, Canberra at Australian Defence Force Academy, had earlier told Sputnik.