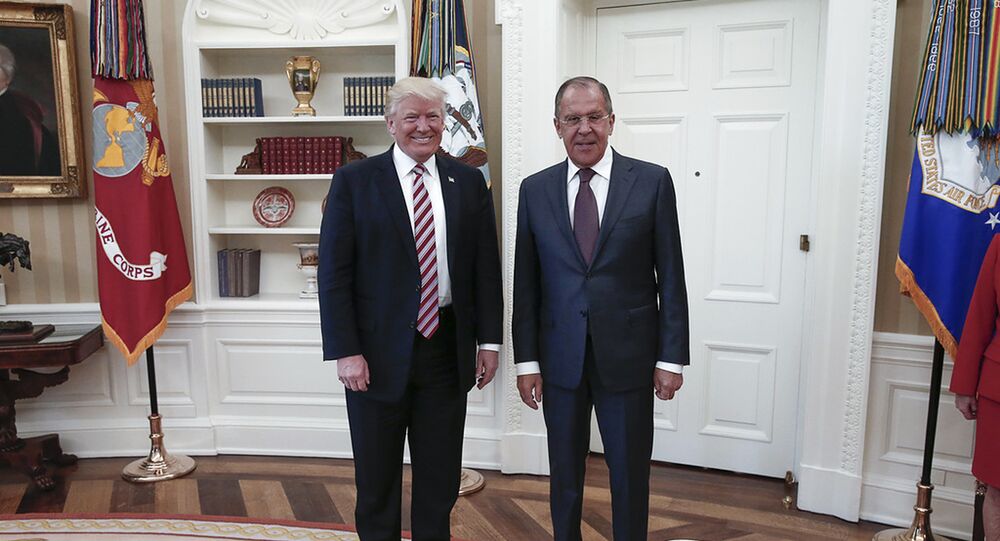 He specified it could happen only "if the US administration wants it, of course."

Meanwhile, Putin's aide Yuri Ushakov commented on Putin's statement. He said that there had been no sound recording at the Trump-Lavrov talks, but it had been transcribed.

© Photo : RUSSIAN FOREIGN MINISTRY
What's Behind Bogus Story About Trump Sharing Sensitive Intel Data With Russia
The comment came after the Washington Post reported that Trump told Russian Foreign Minister Sergei Lavrov and Ambassador to the United States Sergei Kislyak information about a terror threat involving laptops on airplanes. The information reportedly came from a US partner through an intelligence-sharing agreement.

He also joked that Lavrov didn't share with him and Russian intelligence services any secret information which Trump had given him. "This is very bad, I need to deliver a reprimand to him [Lavrov]," Putin said jokingly.

"Political schizophrenia is developing in the United States. I cannot explain differently such accusations against the current president claiming he revealed some secrets to Lavrov."

"At first, when we followed the developing process of the internal political struggle [in the US], it looked ridiculous. Today it is not just sad, it causes  concern because people who generate such nonsense, can generate even bigger nonsense [in the future]," Putin said.

© Sputnik / Aleksey Nikolskyi
Putin Says Claims Trump Gave Lavrov Secret Info Show 'Political Schizophrenia' in US
The situation in the US is being in turmoil using anti-Russian slogans, Putin said, adding that Trump is not being allowed to work properly. He added that Russia highly estimates the results of Lavrov's visit to the US which followed after his US counterpart Rex Tillerson's visit to Moscow.

"They destabilize the intra-political situation in the United States using anti-Russian slogans, they either do not understand that they bring in this rubbish themselves, then they are just stupid, or they understand everthing and then they are dangerous, dirty people. But in any case this is the business of the United States, in which we did not intend to interfere and will not do so," Putin told a press conference.

Following the media reports, National Security Adviser Herbert Raymond McMaster stressed earlier that Trump has not revealed any intelligence sources in the conversation at the White House last week. The officials spoke about threats from terrorist organizations, including threats to aviation. Later, Trump himself took to Twitter and said that he had every right to share information on terrorism and the safety of flights with Russian officials.