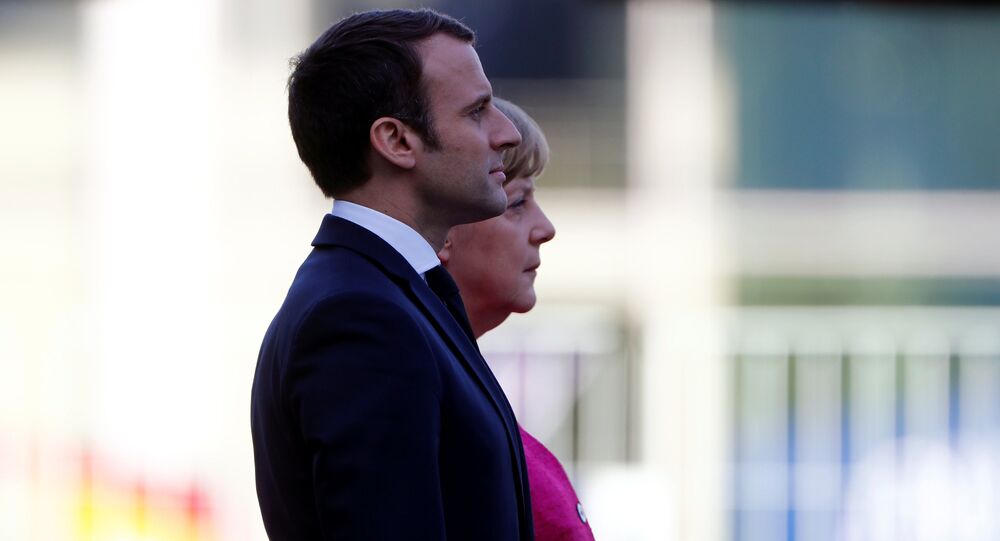 One day after his inauguration, Emmanuel Macron paid his first foreign visit as president of France. During a meeting in Berlin, the newly elected head of the Fifth Republic discussed with German Chancellor Angela Merkel a "plan for Europe's future."

Following the meeting, Merkel said that Berlin and Paris intend to "give a new momentum" to the European integration. However, the two leaders share not only mutual sympathies, but also a number of disagreements.

Proposals include a common budget for the eurozone, as well as German-French investments in science, transportation and online networks.

"We agreed on a further development of our bilateral relations, to which we can give new dynamics," Merkel was quoted as saying.

The German leader also noted that after the parliamentary elections in France, the countries will organize a meeting on the ministerial level to discuss bilateral projects that will help the states to move to a new round of bilateral relations and draw up a medium-term road map for the EU.

Emmanuel Macron also said after the meeting that he and Merkel agreed on the creation of a comprehensive plan to strengthen the eurozone.

"We agreed with Chancellor Merkel on the creation of a step-by-step plan for Europe's future in order to make the eurozone stronger," Macron said.

© REUTERS / Ukrainian Presidential Press Service/Mykola Lazarenko/Pool
Poroshenko, Merkel Agree to Continue Work in 'Normandy Format' With Macron
At the same time, experts draw attention to the fact that, despite impressive history of warm relations between the countries and friendship between Merkel and former French President Francois Hollande, there are potential disagreements between the countries that may become evident in the near future.

In particular, Macron is anxious about Germany's leading positions in the European economy. In 2016, Germany's trade surplus reached a record level, exceeding €250 billion. France, on the other hand, has a trade deficit that amounted to almost €50 billion last year, RT wrote.

According to a member of the Alternative for Germany party, Hansjörg Mueller, Macron intends to increase France's welfare at the expense of Germany.

"Macron wants to access insurance funds, where the money of German investors is stored. German people do not want to pay the debts of other countries," Mueller told RT.

Moreover, it would be logical to assume that Merkel will not want to give up her dominant positions in the EU.

As French politician and leader of the National Front Marin Le Pen joked during her pre-election campaign, "France will be in any case led by a woman: either me, or Mrs. Merkel."