If Turkey goes through with reintroduction of death the penalty, it will mean the end of the country’s talks on the accession to the European Union, European Commission President Jean-Claude Juncker said in an interview with the Rheinishe Post newspaper on Monday.

MOSCOW (Sputnik) — Following Turkey’s constitutional referendum on expanding presidential powers over the judicial and legislative branches of the government, held on April 16, Turkish President Recep Tayyip Erdogan expressed his readiness to reinstate the death penalty if the measure was supported by the people. 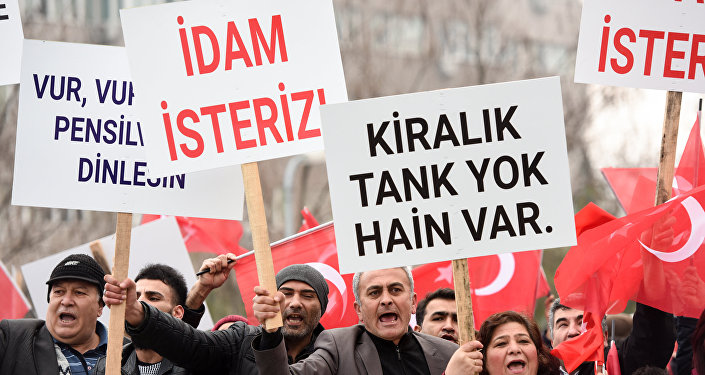 "It is the ultimate red line. If the introduction of death penalty becomes more than a rhetoric, it will be Turkey’s clear renunciation of the European family. It will be equal to the end of the negotiations, because our Union is based upon respect for democracy, human rights and the rule of law, as well as upon the European Convention for the Protection of Human Rights and Fundamental Freedoms. These values exclude death penalty," Juncker said.

Ankara signed an association agreement with the then-European Community in 1963, and submitted a membership application in 1987. Talks concerning Turkish membership into the European Union began in 2005. On November 24, European lawmakers voted in favor of freezing EU accession talks with Turkey until it lifted restrictive measures in the country, set in place since a failed coup in July 2016.