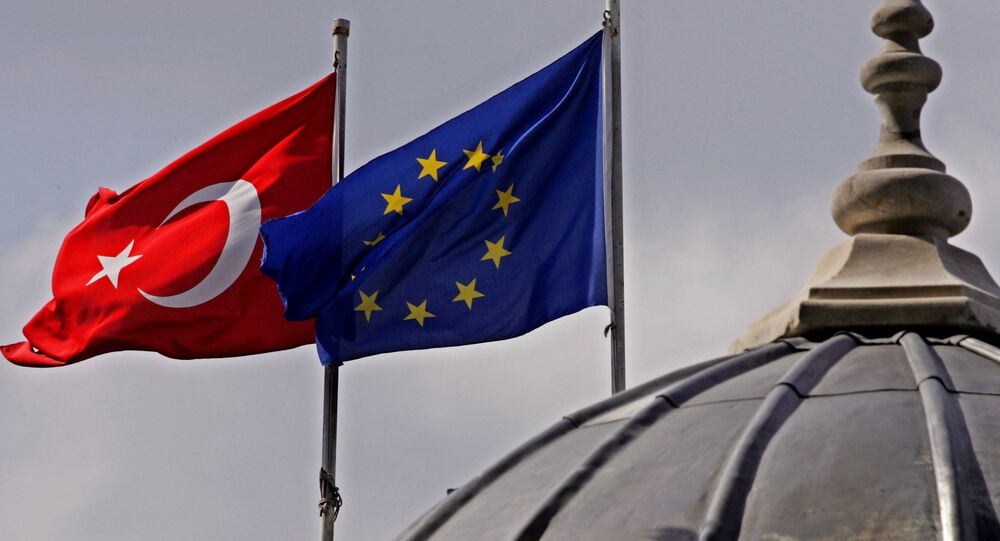 Hisyar Ozsoy, the deputy chair of the Turkish opposition Peoples' Democratic Party (HDP) in charge of foreign affairs, stated that the European Union was also interested in maintaining relations with Turkey despite existing discontent with the state of democracy and human rights in the country.

On Tuesday, Erdogan said that Turkey would break off its relations with the European Union if Brussels did not open new accession chapters for Ankara.

"Erdogan is threatening the EU but he is not in that powerful political position. Mostly he is bluffing because Turkey cannot [break up] with Europe and everybody knows that. Turkey is economically integrated with the EU, about 40% of Turkish trade is with the EU and about 65% of foreign direct investment is coming from the European countries. So Erdogan in no way can say ‘no’ to Europe," Ozsoy said.

Ozsoy stressed that, in its turn, the European Union was also interested in maintaining relations with Turkey despite existing discontent with the state of democracy and human rights in the country.

"The relations between the EU and Turkey will continue, but it seems that those relations will deteriorate because Erdogan is increasingly more and more authoritarian at home. There is no rule of law, no democracy, no human rights and the Europeans are concerned about the situation and at the same time they want to maintain their commercial relationships with Turkey and they want to do trade. They also want to keep the refugees out and for that they need Turkey," Ozsoy added.

© AP Photo / Alexander Zemlianichenko
Turkey-Europe Rift: 'Ankara Should Get Closer With Russia, China Instead of EU'
On Saturday, President of the European Parliament Antonio Tajani called Turkey's internal situation, including debates on the death penalty, and arrests of journalists unacceptable, but noted the existing economic relations between Turkey and the European Union and stressed that the bloc "would not shut the door for Turkey."

The April 16 referendum in Turkey on constitutional reforms to expand the powers of the Turkish president caused concerns among European countries, which are Turkey's main export markets. Turkey is the EU fifth largest importer and fourth largest exporter. In 2016, the total trade turnover between the European Union and Turkey amounted to 144.7 billion euros ($155 billion).

Ankara signed an association agreement with the then-European Community in 1963, and submitted a membership application in 1987. Talks concerning Turkish membership into the European Union began in 2005. In 2016, the sides reached a landmark deal, under which Ankara pledged to take back all migrants and refugees crossing illegally from its soil to Greece in exchange for the acceleration of EU membership talks. But on November 24, European lawmakers voted in favor of freezing EU accession talks with Turkey until it lifted restrictive measures in the country, set in place since a failed coup in July 2016.

EU Lawmakers Call for 'Alternatives' to Turkey’s Accession to Bloc