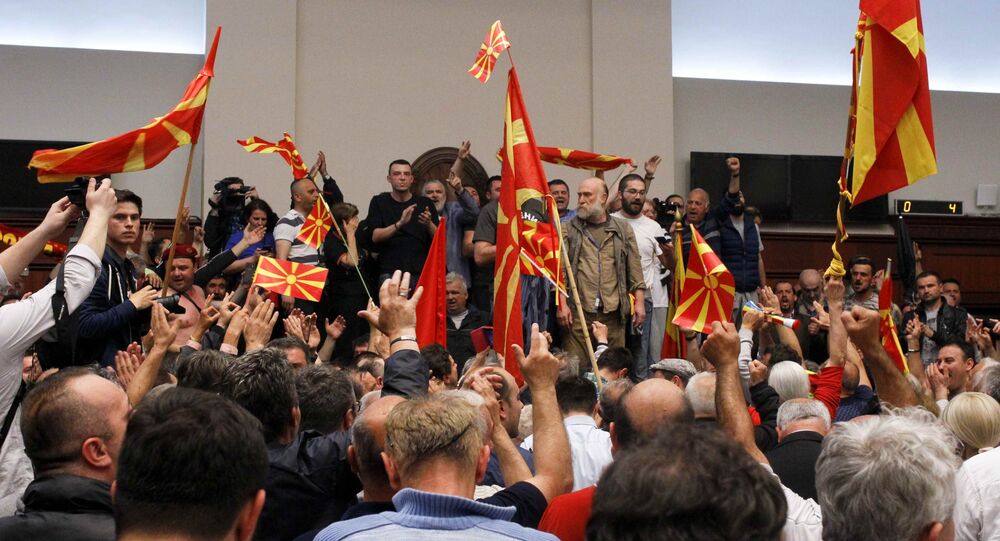 'What Happens in Macedonia Planned in Advance' - Moscow on Parliament Violence

Moscow calls for stopping external pressure on Macedonia amid an outbreak of violence in the Balkan country's parliament after a controversial election of its chairman.

"We are deeply concerned about the latest developments in the Republic of Macedonia. On April 27, the opposition that lost the parliamentary elections actually carried out an attempt to seize power in the country by force… having elected the chairman of the Assembly (parliament) with a gross violation of the established procedures," the statement said.

The ministry said that as a result of a brawl involving demonstrators who spoke against the 'impostors', people were injured, some of them hospitalized, adding that official EU representatives, ambassadors of a number of European countries and the United States immediately welcomed the "new chairman" of the parliament.

"Such a quick coordinated reaction undoubtedly testifies to the fact that what happened had been planned in advance, with the secret knowledge of the 'external supervisors' of the Macedonian opposition," it said.

The ministry called for seeking a solution to the situation only by means of an intra-Macedonian dialogue.

"It is necessary to stop any external pressure and allow the responsible political forces of the Republic of Macedonia to determine the further development of the country on their own," the statement said.