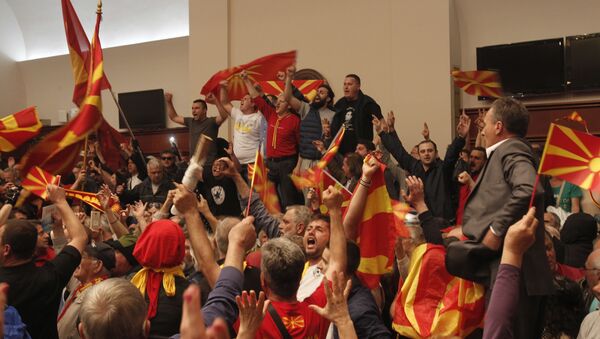 Protesters stormed into Macedonia’s parliament and attacked Social Democratic Union party leader Zoran Zaev, who was filmed bleeding from his forehead after the attack.

Roughly 200 protesters, some of them wearing masks and waving Macedonian flags, charged into the parliament. Shouting "traitors" at the opposition MPs, throwing chairs and refusing to leave, the protesters were part of a movement that has been rallying in the streets of Skopje and other cities for the past two months.

​Along with Zaev, three other lawmakers and 10 security guards were injured in the brawl.

Macedonia's December elections left former Prime Minister Nikola Gruevski's right-wing VMRO-DPMNE party with a plurality (51 of 120) of parliamentary seats, but without enough to form a government. Along with the VMRO-DPMNE and the Social Democratic Union of Macedonia (SDSM), there are several small parties representing Macedonia's Albanian minority.

#Macedonia Among those injured is also the leader of the main party in the new majority — SDSM president Zoran Zaev https://t.co/FScdVhI8Gh pic.twitter.com/XMQOB8Bfi6

​Attempts to form a coalition broke down when the Albanian parties pushed for recognition of Albanian as the official second language of Macedonia. Roughly a quarter of Macedonia's population of 2 million is ethnically Albanian.

Zaev reached an agreement with the largest of these parties, the Democratic Union for Integration (DUI), and attempted to form a government. President Gjorge Ivanov, a member of VMRO-DPMNE, refused to hand a mandate to Zaev, as he resists the proposal for Albanian to become a second language for fear that it could cause a break-up of Macedonia.

​Ivanov's decision was criticized as undemocratic by both the EU and the United States. Earlier on Thursday, Zaev circumvented normal procedures for electing a speaker and partnered with the Albanian minority parties to successfully elect DUI member Talat Xhaferi as speaker for the new parliament.

Enraged protesters broke through a police barricade to attack Zaev. Macedonian police replied by firing stun grenades to disperse the protesters and bring medical attention to the injured parliamentarians and officers.

.@BalkanInsight One of the guys who stormed #Macedonia's parliament today is wearing a HOS shirt; a Croatian far-right paramilitary. Extremist solidarity?! pic.twitter.com/BmyRfqp5dr

​In a brief statement, President Gjorge Ivanov said that an emergency meeting of the Balkan state's leaders will convene on Friday, where he will appeal to them "for reasonable and responsible behavior."

"Lawmakers are primarily responsible for restoring the situation in accordance to the Constitution and laws, which were violated today," said Ivanov.

Other European nations condemned the violence. Swedish ambassador Mats Staffansson, speaking on behalf of the European diplomats stationed in Macedonia, said that dialogue is the purpose of a parliament, and that "it is the responsibility of the police of this country to make sure that this kind of violence does not happen."

Macedonia is not an member of the European Union, but they are an official candidate for membership. In a condemnation of the violence, EU Enlargement Commissioner Johannes Hahn tweeted that "Violence has NO place in Parliament. Democracy must run its course."