The majority of Europe's politicians congratulated Macron following his victory in the first round of France's presidential elections on Sunday, while ignoring his famously Eurosceptic populist opponent, Marine Le Pen. Meanwhile, protesters in Paris voiced their dissatisfaction with both candidates.

Chair of the German Social-Democratic Party Martin Schulz wrote on Twitter: "My congratulation to Emmanuel Macron. All French democrats should unite in order to prevent a nationalist from becoming President."

Schulz hopes his party's performance in Germany's upcoming national elections will propel him to the role of Chancellor. 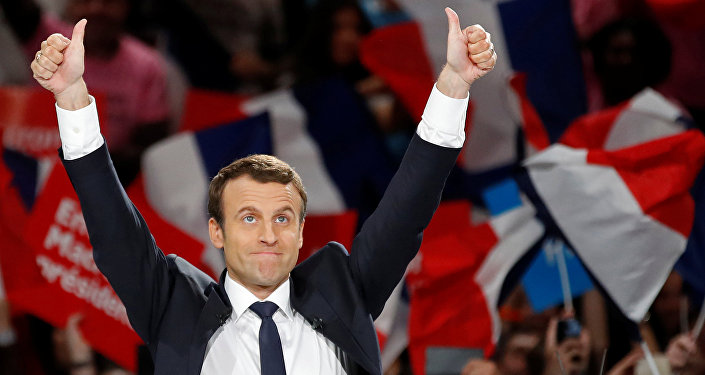 The leader of the far-right National Front party has received fewer words of support. Le Pen's result was welcomed by a number of fellow populist and Eurosceptic politicians such as Matteo Salvini, the leader of the Italian party Lega Nord. The Italian politician expressed hope for her victory in May.

© Sputnik / Kristina Afanasyeva
Macron, Le Pen Advance to Second Round of French Presidential Vote
Meanwhile, Russian politicians did not share the optimism of their European colleagues.

In turn, Pyotr Tolstoy, deputy speaker of the Russian State Duma, said that the results of the first round demonstrate the defeat of France's major political forces.

According to the lawmaker, the French voters said no to the existing system and showed their dissatisfaction with the last 10 years of government policy. 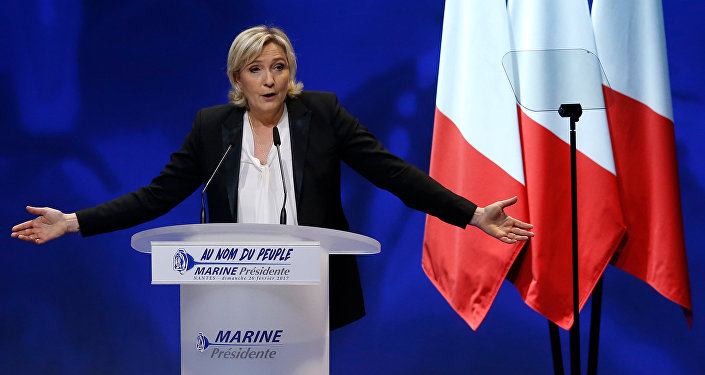 © REUTERS / Stephane Mahe
Le Pen Says Macron 'Weak' in Fight Against Islamist Terrorism
Leonid Slutskiy, chairman of the Russian Parliamentary Committee for Foreign Affairs, noted that the fact that Le Pen progressed to the run-off indicates an increase in protest sentiments in France and other Western European countries. According to the lawmaker, the reasons are the migrant crisis and the terrorist threat in Europe.

According to Russian Senator Alexei Pushkov, the gap of just several percent between Macron and Le Pen points to a division within French society. He suggested that the situation is unlikely to change, even after Macron’s victory on May 7.

According to Yury Rubinsky, an expert on France at the Institute for European Studies at the Russian Academy of Sciences, the main result of the first round was the withdrawal of the traditionally major parties from the race.

"In a way, the French political system has changed. The Fifth Republic established by Charles de Gaulle was based on a rotation of power between two main parties — the republicans and the socialists. But now the both parties are out of game," Rubinsky told Sputnik.

© REUTERS / Christian Hartmann
French President Hollande to Back Macron in Run-Off Election - Government Spokesman
According to the expert, now the question is what the majority in the parliament will be and thus what the cabinet will be.

Alexander Brod, co-chair of the Russian electoral rights protection organization Civil Control, underscored that a high turnout in the first round indicates that there is public demand for a change in the country’s political system.

"This is a sign that the French do not like the current policy and there is a demand for changes in the political system. The current policy resulted in the migration crisis and economic troubles. It also weakened France’s position in Europe and led to deterioration in its relations with Russia. The French hope that the new president will improve their living standards and strengthen France’s position in Europe," Brod said.

Despite the fact that analysts around the world for a long time could not agree on who would win the first round, the final results are not surprising, according to Vladislav Belov, deputy director of the Institute for European Studies at the Russian Academy of Sciences.

© REUTERS / Charles Platiau
Le Pen’s Campaign Team Starting New Campaign for French Presidency - Le Pen's Office
"This is no sensation, except for turnout maybe. It was higher than expected. Before the vote, there were the results of polls and it was predicted that Macron and Le Pen would go to the run-off. We’ll wait for May 7. I guess that Macron will win because the high turnout also helped other candidates who are Le Pen’s rivals," Belov told Sputnik.

According to the expert, both candidates showed solid performance during the first round and received the support they expected.

© Sputnik / Irina Kalashnikova
WATCH LIVE: Protests Hit French Capital on Presidential Election Day (VIDEO)
While European politicians celebrated Macron’s lead in the first round of election, violent protests erupted at the Place de la Bastille in Paris after the results were announced and ended after midnight. Protesters had something else entirely to say: "Neither Le Pen, Nor Macron!"

After the protests were dispersed in the center of Paris, protesters moved to other parts of the city.

Organizers also said they will resume protests on Monday.

Emmanuel Macron Forges Ahead After First Round of French Presidential Election

Defeated Fillon Will Vote for Macron in French Presidential Run-Off