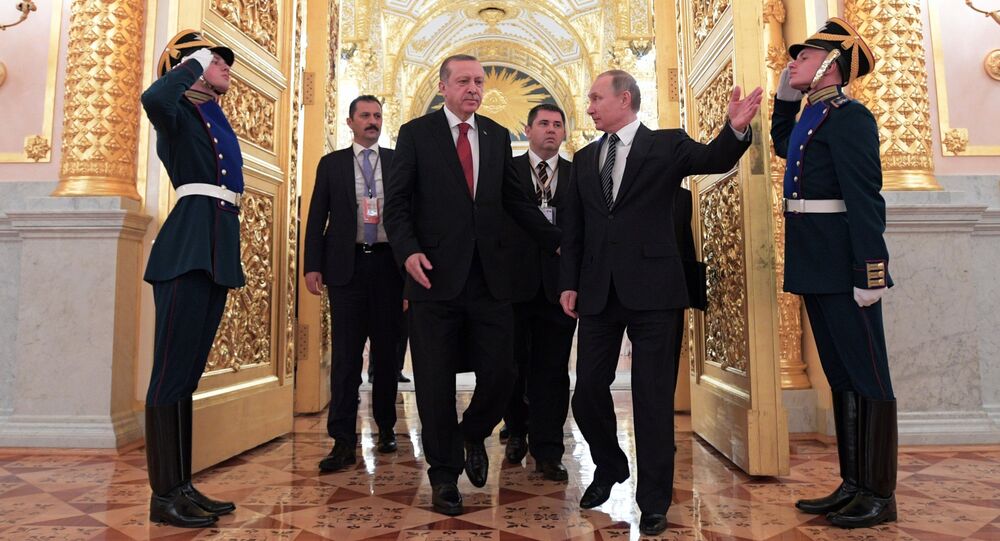 On Friday, the presidents of Russia and Turkey chaired the 6th meeting of the High-Level Russia-Turkey Cooperation Council and had a second, private meeting behind the closed doors. What does Erdogan want from Moscow and how does he see his future relationship with Russia?

© REUTERS / Osman Orsal
Putin Does Not Rule Out Involvement of the US in Joint Efforts on Syrian Settlement
On Friday, Turkish President Recep Tayyip Erdogan visited Moscow, accompanied by a large ministerial delegation, to take part in the 6th meeting of the High-Level Russia-Turkey Cooperation Council. The Turkish leader also had a second, private meeting behind the closed doors with Russian President Putin.

"The discussion covered the entire scope of Russian-Turkish relations with a focus on the further restoration of mutually beneficial trade and economic ties," says a statement on the official website of the Russian President.

A package of documents was signed after the meeting.

An intergovernmental mid-term trade, economic, scientific, technical and cultural cooperation program for 2017–2020 was signed, as well as an agreement between the Russian Direct Investment Fund and the Turkish Sovereign Fund to establish a Russian-Turkish investment fund with a capital of up to $1 billion.

Following a meeting in Moscow, the two leaders held a joint press conference.

"In our official statements, I believe we can dispense with the phrase “normalization of relations” because we believe we have already passed this stage on issues such as Syria and regional security. We have considered these issues. We often hold telephone conversations in the course of which we address these issues," President Erdogan stated at the press conference.

The Russian leader has also acknowledged that the political dialogue between the two counties has resumed.

"The meeting in this format is taking place after a pause that was caused by the well-known tragic events. Proactive political dialogue resumed between our countries, and so did efforts by foreign ministers to coordinate strategic planning. The mixed intergovernmental commission and bilateral civil society forum have also resumed their work," he said.

"Russia and Turkey have great potential for further advancing their neighbourly relations. Together, not only can we make up for the opportunities that were lost, but also raise our cooperation to a new level. At least Russia is willing to do so and committed to moving in this direction," Vladimir Putin added.

© AFP 2020 / ALEXANDER NEMENOV
'If Erdogan Starts Confronting Moscow It Will Bury Turkey'
After the narrow format meeting of the Presidents, Vladimir Putin said that energy remained a priority area in cooperation between the two countries.

"Russia reliably supplies Turkey with energy sources. The Blue Stream gas pipeline has been stably operating for years. This year, Gazprom plans to move forward with the construction of another major energy route, the Turkish Stream. Two lines with a capacity of 15.75 billion cubic metres a year each will be laid across the Black Sea bed. The first will carry the fuel to Turkey’s domestic market and the second – provided our European partners are interested – will bring gas to Europe via Turkey," he said.

The Rosatom State Nuclear Energy Corporation is going ahead with building the Akkuyu nuclear power plant in Turkey: four power units with an aggregate capacity of 4,800 MW, he added.

"The project’s implementation opens up long-term prospects for Russian-Turkish cooperation in the peaceful use of nuclear energy. We expect Akkuyu to receive strategic investment status in the near future. To reiterate, both projects – Turkish Stream and the nuclear power plant – meet modern environmental and technological standards and will become major elements in ensuring energy security in the region," the Russian leader announced.

© Sputnik / Sergey Guneev
Erdogan Calls on Russia, Turkey to Remove Obstacles in Development of Ties
While discussing topical international issues, the President said, considerable attention was given to the situation in the Middle East, in particular Syria. The parties spoke in favour of combining the efforts of the entire world community in the fight against terrorism. They noted that largely thanks to the active role of Russia and Turkey, it became possible not only to ensure the cessation of hostilities between Syrian government forces and the armed opposition but also to begin substantive talks, direct and concrete negotiations between the parties to the conflict in Astana, the capital of Kazakhstan.

"The ceasefire in Syria is generally holding thanks to the well-coordinated efforts of Russia, Turkey and Iran. The level of violence has declined substantially. We agreed with our Turkish colleagues to continue our cooperation in fighting terrorist groups, above all ISIS, working together through our military and special services," Vladimir Putin said.

"As for the activity of Syrian groups affiliated with the PKK terrorist organization, such and PYD and YPG, I believe it is necessary to completely put an end to their activity in Russia. Regarding the FETO (the Gülenist Terror Group) terrorist organization, unfortunately, we know that under the guise of other organizations, they are active in certain Russian cities, as well as in Moscow and St Petersburg. We believe that the Russian authorities will take steps to put an end to that activity," the Turkish leader said.

© Sputnik / Sergey Guneev
Erdogan Calls on Russia, Turkey to Remove Obstacles in Development of Ties
Commenting on this remark of the Turkish President, Russian political analyst Alexander Kirpichev, familiar with the course of negotiations, called importance of the Kurdish factor to the Turkish leader "like a red rag to a bull."

"To Erdogan, the Kurdish factor like a red rag to a bull in terms of the regional security and the security of Turkey," he told Russia's online newspaper Gazeta.ru.

The expert suggested that the urge to end any cooperation with the Kurds was the major purpose of Erdogan's trip to Moscow.

"It is very important to Erdogan that Russia does not cooperate with the Kurds on the Syrian territory where Turkey is conducting its Operation Euphrates Shield, which is de facto aimed against the Kurds. Ankara is planning to setup a buffer zone there between the Turkish border and the Kurdish regions," he concluded.