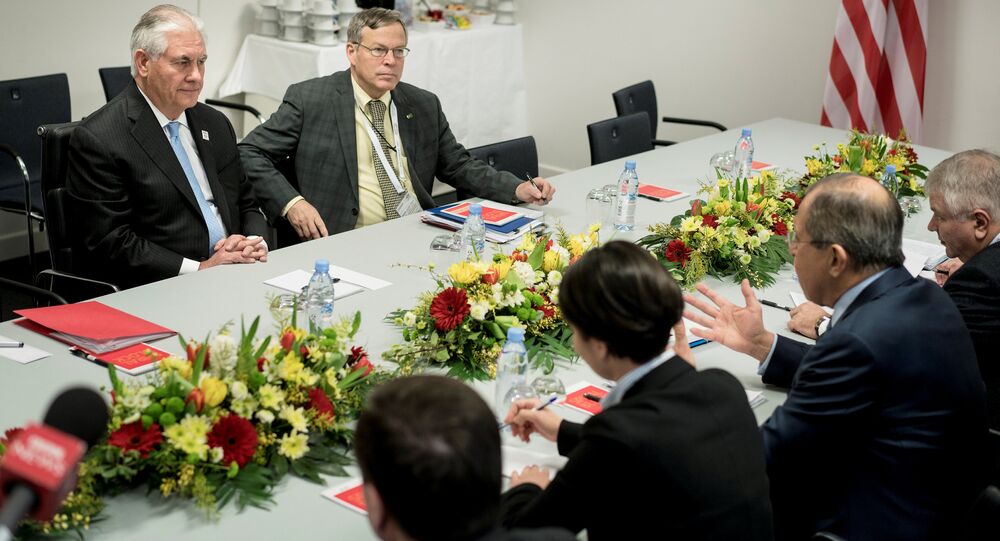 For the first time since his February 1 confirmation, Tillerson met with his Russian counterpart Sergey Lavrov. As would be typical for a meeting between diplomats, they shook hands and exchanged pleasantries.

Ordinarily, the two would deliver opening remarks, take one or two impromptu questions, and then adjourn to speak in private. Lavrov greeted Tillerson by congratulating him on his appointment. A journalist then asked Lavrov about Russia's stance on the resignation of US President Donald Trump's national security adviser, Michael Flynn.

"You should know we do not interfere in the domestic matters of other countries," Lavrov replied.

But when Tillerson began to speak, instead of returning the introduction or taking questions on his own, his staffers rushed the journalists out of the room. Lavrov was visibly surprised by this. "Why did you shush them out?" the Russian top diplomat asked.

After the private meeting concluded, Tillerson appeared before the media and read a statement. "Foreign Minister Lavrov and I had a productive meeting," he said. "We discussed a range of issues of mutual concern."

The Secretary of State said, "The US will consider working with Russia when we can find areas of practical cooperation that will benefit the American people. Where we don't see eye to eye, the US will stand up for the interest and values of America and her allies."

Tillerson also called on Russia to honor its enforcement of the Minsk Protocol, meant to end the fighting in the Donbass region in Ukraine. Anti-Kiev rebels continue to battle with Ukrainian armed forces in a conflict that has claimed over 7,000 lives since 2014. Moscow repeatedly denied any involvement in the civil war in Ukraine.

Tillerson did not take questions, instead walking out after his brief statement. A former CEO of ExxonMobil, Tillerson has no experience in politics or international diplomacy.

On the Russian side, Lavrov stressed that sanctions were not discussed, but those in favor of them should consider "how much the artificial desire to politicize this subject meets the interests of the countries concerned." The Russian diplomat also delivered a general message of cooperation between the two powers.

Regarding a meeting between Russian President Vladimir Putin and US President Donald Trump, the Foreign Minister said that, "the two Presidents will meet when they decide that it's the right time."

Tillerson Says US Will Work With Kosovo for 'Peace and Prosperity'