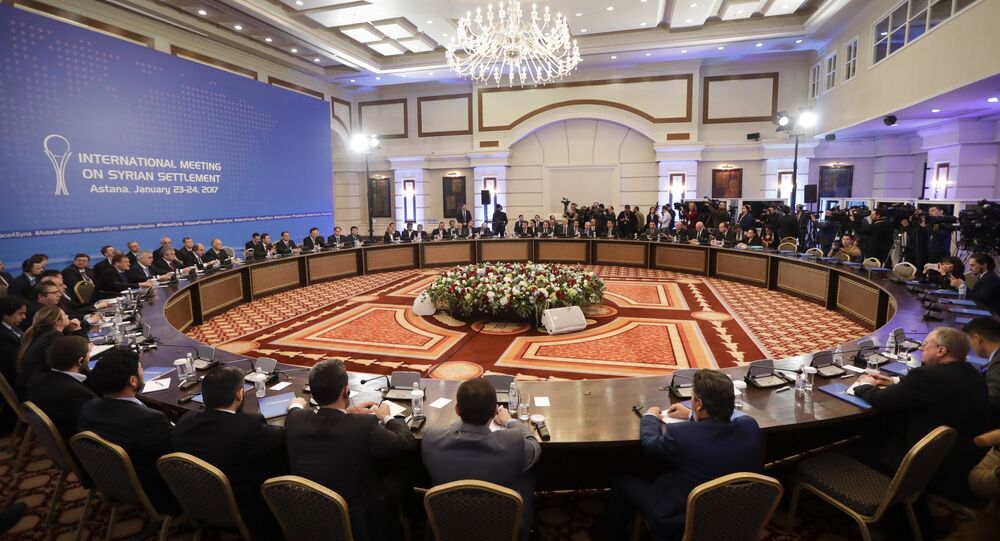 As the representatives of the Syrian government and opposition factions meet in Astana for talks brokered by Moscow, Ankara and Tehran, Turkish Deputy Prime Minister Veysi Kaynak spoke in an interview with Sputnik Turkey about Turkish-Russian cooperation in fight against Daesh in Syria and the possible outcome of these talks.

© REUTERS / Mukhtar Kholdorbekov
Russia Focuses on Syrian Armed Opposition Groups' Participation in Astana Talks - Lavrov
According to Kaynak, these negotiations are a very promising initiative, which, not being an alternative to the Geneva peace process, are capable of providing the basis for signing of a final comprehensive agreement on the Syrian crisis.

“Daesh occupied almost half of the territory of Iraq and Syria. We have seen that as a result of these attacks carried out by the terrorists in various areas, the local population was forced to leave their homes and radical terrorist groups started operating in the region. The situation had reached catastrophic proportions,” Kaynak told Sputnik Turkey.

Against the backdrop of this humanitarian catastrophe, Turkey, Russia and Iran took the initiative and managed to reach an agreement on evacuation and establishment of a ceasefire.

However, the deputy minister noted that the situation in Syria is far from stable and the citizens are still being slaughtered by the terrorists.

“Unfortunately, the allies in the anti-terrorist coalition set up to combat Daesh, instead of forming an alliance with Turkey regarding the use of ground forces, chose to form an alliance with the Party of Democratic Union, which is the Syrian branch of the PKK,” the deputy minister said.

According to Kaynak, Russia and Turkey managed to establish close cooperation on humanitarian issues in particular to prevent bombing of civilian targets and civilian population in various parts of Syria.

© AP Photo / Sergei Grits
Turkey Not Expecting Swift Results on Syria Settlement in Astana As Parties Fighting for 6 Years
Speaking about the course of operation against Daesh in the region of El Bab, Kaynak said that Russia and Turkey managed to coordinate actions of their air force so as to not harm each other during the attacks on terrorist’s positions.

The minister stressed that this coordination is an important positive step for both the countries.

“Due to the operation, Shield of Euphrates, which was launched on the territory of Jarabulus with the ultimate objective of liberating El-Bab from Daesh, terrorist activities have stopped in the area between Jarabulus and Azaz which is about 2000 square km. all the way till El-Bab. The number of terrorists crossing the Turkish-Syrian border has also fallen significantly,” the deputy minister said.

Currently, civilians have started returning back to their households. According to the deputy prime minister, this points to the fact that Turkey's strategy together with Russia and Iran is accurate and is aimed at ending the bloodshed in Syria.

Talking about the Astana talks which are aimed at making progress of the Syrian resolution, the deputy minister said that, “Negotiations in Astana inspire great hope for progress for the resolution of the Syrian conflict.”

He noted that the meeting held in Astana is not an alternative to the UN-led talks in Geneva. However, the summit in Astana is intended to pave the way for a final agreement.

“The main objective of the negotiations is to ensure that the terrorists in the region do not control the territories of countries such as Iraq and Syria and do not oppress and kill its civilians. Both Turkey and Russia have repeatedly said and continue to say that the protection of Syria and Iraq's territorial integrity is the basis of the strategy to ensure stability of the entire Middle East region,” Kaynak concluded.

Representatives of the Syrian government and opposition factions met in Astana for talks brokered by Moscow, Ankara and Tehran, following a ceasefire in the crisis-torn country endorsed by the UN Security Council on December 31, 2016.

It is the first time that the government delegation has been seated at the same table as the armed opposition. According to Kazakh Foreign Ministry, the talks are expected to last for 24 hours and conclude on Tuesday.