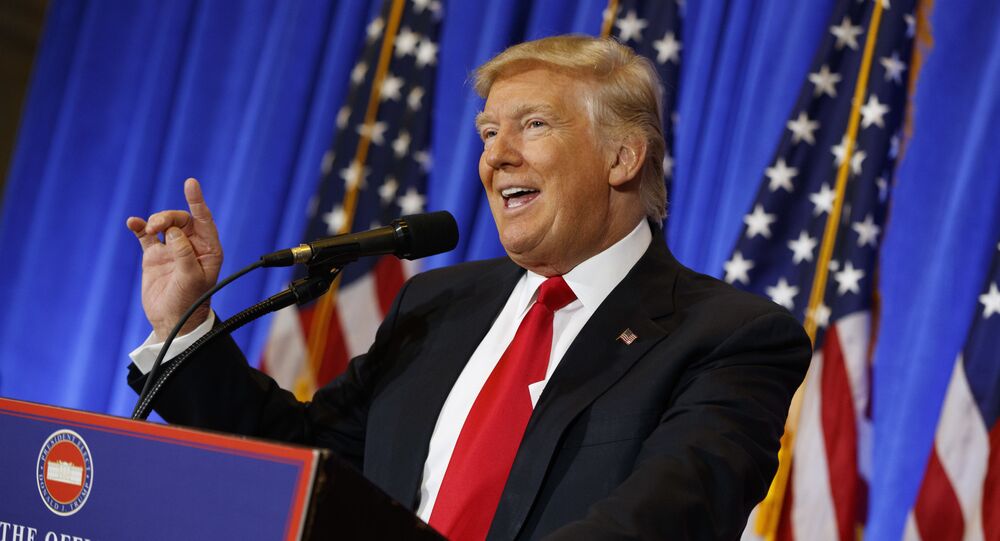 Trump Speaks: US President-Elect's Statements Before and After Election

A few days remain until Donald Trump officially becomes the 45th President of the United States. During his campaign, the flamboyant billionaire was known for his bold statements on a range of important issues. However, after his surprising victory Trump had to clarify or correct some of his promises, especially regarding foreign policy.

Getting Along With Russia

He also praised Vladimir Putin’s leadership skills, even saying that the Russian president "has been a leader far more than our president [Barack Obama] has been."

"I think that I'll be able to get along with him," he added.

However, in a recent interview with The Times and Bild newspaper the President-elect said he would trust President Putin and German Chancellor Angela Merkel, but it might not last long.

© REUTERS / Stevo Vasiljevic
Putin-Trump Meeting Could Be 'New Starting Point for US-Russia Relations'
"Well, I start off trusting both – but let’s see how long that lasts. It may not last long at all," Trump said.

Donald Trump’s willingness to normalize US-Russia ties have also been questioned with some of his key appointments to his future administration.

For example, Trump’s pick for State Secretary Rex Tillerson said Washington should be "clear-eyed" about its ties with Moscow and said "Russia today poses a danger" to the US.

During recent hearing in Senate, Mattis criticized Russia saying that it "had chosen to be a strategic competitor [to the US], an adversary in key areas."

"Russia is the principle threat to the United States," Mattis told the Senate Armed Services Committee.

Nevertheless, Trump seems to remain confident that a thaw between Washington and Moscow.

"There is no reset button. We are either going to get along or we are not," Trump said during a press conference on January 11.

During his campaign, Trump said that sanctions were harmful for cooperation between the US and Russia.

"We'll be looking at that. Yeah, we'll be looking," Trump said in July, being asked whether he would consider removing anti-Russian sanctions if elected.

© AP Photo / Evan Vucci
Trump Likely to Keep Sanctions in Place as an 'Ace Up His Sleeve' in Talks With Russia
In a recent interview with The Wall Street Journal, Trump commented on restrictions against Russia.

He said he would keep intact sanctions against Moscow "at least for a period of time," but stressed that normalization with Russia was very important.

"If you get along and if Russia is really helping us, why would anybody have sanctions if somebody’s doing some really great things?" Trump told the newspaper.

Speaking to The Times, the President-elect said US sanctions against Russia could be lifted in exchange for a bilateral agreement on reducing nuclear weapons arsenals.

"For one thing, I think nuclear weapons should be way down and reduced very substantially, that’s part of it. But Russia’s hurting very badly right now because of sanctions, but I think something can happen that a lot of people are gonna benefit," Trump said.

© AP Photo / J. Scott Applewhite
New US Sanctions Threats 'Attempt to Tie Trump's Hands' in Relations With Russia
Many analysts note that Trump’s willingness to normalize relations with the Kremlin is more than rhetoric, but part of a pragmatic approach by the new US presidential administration to protecting the national interests.

"Global politics never saw such precedents. When Trumps assumes power it is likely that the US will cooperate [with Russia] on Syria and will gradually ease the current sanctions. But the complete removal is unlikely. The Americans need the leverage on Russia, and Trump will use them for his negotiations with the Kremlin," Mikheev told the Russian online newspaper Vzglyad.

One of Trump’s repeated promises was to "knock the hell out of Daesh," a terrorist group occupying large parts of Syria and Iraq.

"If we can have a good relationship with Russia, and if Russia would help us get rid of ISIS [Daesh], frankly, as far as I'm concerned, you're talkin' about tremendous amounts of money and lives and everything else. That would be a positive thing, not a negative," Trump told ABC News in an interview during his campaign.

© AFP 2020 / Savo PRELEVIC
Strategic Synergy: Trump to 'Improve Ties With Russia on Syria, Ukraine'
Trump placed a special emphasis on the necessity to cooperate with Moscow to defeat Daesh, which he considered a major threat to global security.

Trump also suggested the US should focus on fighting terrorists in Syria, instead of trying to oust President Bashar Assad.

During a press conference in New York City last week, Trump reiterated his suggestion that the US could team up with Russia in fighting the terrorist group.

"Russia can help us fight ISIS [Daesh], which by the way is number one tricky, I mean if you look, this [Barack Obama] administration created ISIS by leaving at the wrong time. The void was created, ISIS was formed," Trump said.

At the same time, in an interview with The Times and Bild, Trump criticized Russia’s engagement in Syria.

"I think it's a very rough thing. Aleppo has been such a terrible humanitarian situation," he said.

Advocating for focusing on domestic problems, Trump repeatedly questioned the role of NATO and the US’ commitment to defend its allies.

"NATO: It's obsolete and the United States is paying too much [to sustain it]," Trump said during one of electoral rallies.

© AFP 2020 / Jean-Christophe Verhaegen
Kremlin Agrees With Trump on Assessing NATO as 'Obsolete' Relic - Kremlin
He also repeatedly said that if elected president he would require major US allies to pay a larger portion for joint defense.

It is remarkable that Trump’s attitude to NATO has not changed since he won the White House in November.

In the same interview with The Times, Trump said that NATO is an obsolete organization since it is not heavily engaged in counterterrorism and member countries are not contributing enough.

"I said a long time ago that NATO had problems. Number one it was obsolete, because it was designed many, many years ago. Number two the countries aren’t paying what they’re supposed to pay. I took such heat, when I said NATO was obsolete. It’s obsolete because it wasn’t taking care of terror," the President-elect said.