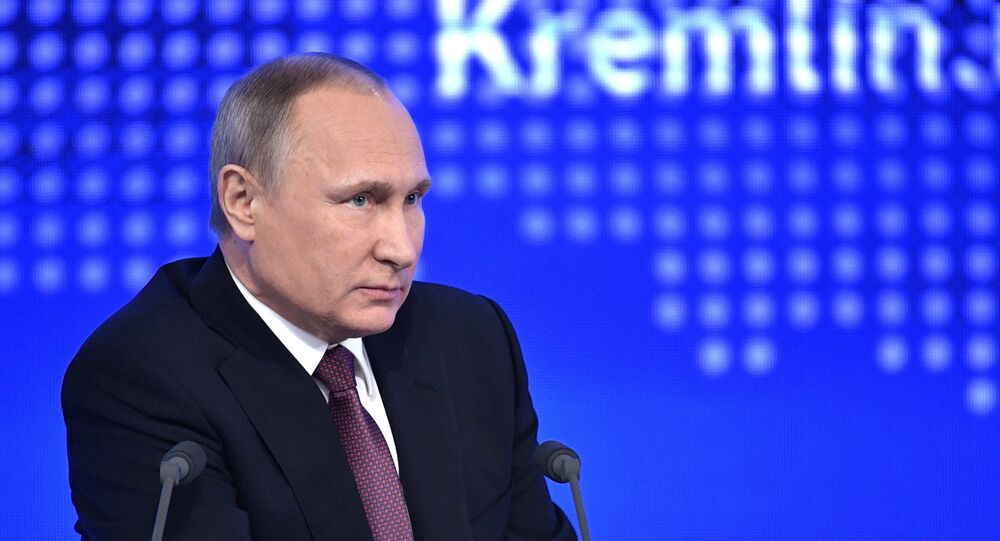 In recent years, Russia has emerged as the key actor in global politics, according to prominent Argentine journalist and analyst Pedro Brieger.

© AFP 2021 / JANEK SKARZYNSKI
Russia Will Not Be Dragged Into a 'New Arms Race Imposed by US, NATO'
"Russia proved that it has become the key player in the international arena. If you want to understand that just look at what is going in Syria," Brieger told Sputnik Mundo.

Commenting on the event, the journalist noted that the press conference was organized right at a time when Russia is making new global achievements and when Moscow’s ties with the United States and Europe are expected to considerably change.

"I think that the Russian government and personally President Vladimir Putin are now preparing for new serious changes in global politics. These changes stem from the fact than soon new US President Donald Trump will soon enter office," Brieger pointed out.

© AFP 2021 / Don EMMERT
'Trump’s Talk About More Nuclear Wepons Has Raised Threat Level for Everyone'
During the press conference, when asked about what he will discuss at his first meeting with Trump, Putin said: "Trump said during the election campaign that he believed it was right to normalize Russian-US relations and said that it couldn’t get worse because [they] were worse than ever. I agree with him. We will think together how to make [the bilateral relations] better."

"Despite the fact that ties between Moscow and Washington, as Trump said, cannot 'get worse,' the leaders of Russia and the US want to improve them. We just need to wait now to have a more clear view of the situation," Brieger said.

According to the journalist, it is still unclear what kind of a US president Donald Trump will be.

"Currently, we’re watching Trump as a candidate and as a president-elect. But we’ll later see him as an acting president. We don’t know what measures he’s going to take," he pointed out.

At the press conference, Putin also said that Moscow is not the one fueling an arms race with Washington. The basis for this process was created when the US withdrew from the Anti-Ballistic Missile (ABM) Treaty, forcing Russia to invest in upgrading its military potential.

As Brieger underscored, to a great extent, the Kremlin’s actions in their defense policy is a response to actions by Washington and NATO.

"After the collapse of the Soviet Union, NATO has been building a strategy similar to that the alliance had during the Cold War. The context now is different, of course. NATO portrays Russia as a threat over the Ukrainian crisis," the journalist said.

According to Brieger, Putin’s reaction to the eastward expansion of NATO is a response that any other leader would deliver.

What's Behind Trump's Comments on Expanding US Nuclear Arsenal

Putin Ready for Constructive Dialogue With US - Kremlin Spokesman