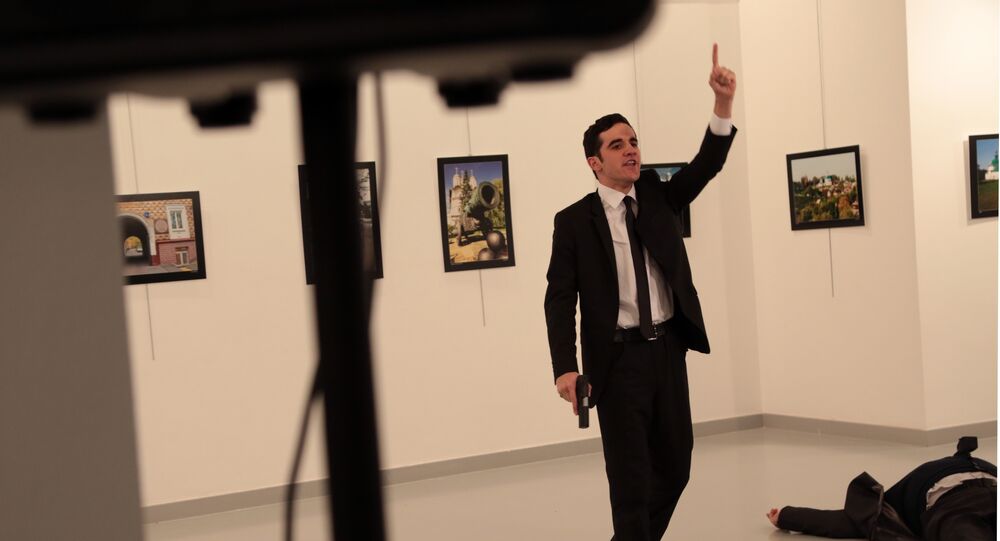 The propaganda of opponents of the recent liberation of the northern Syrian city of Aleppo from militants led to the murder of Andrey Karlov, Russia’s ambassador to Turkey, an adviser to the Iranian foreign minister, told Sputnik.

MOSCOW (Sputnik) — On Monday, Turkish police officer Mevlut Mert Altintas shot dead Karlov at an art gallery exhibition opening in Ankara. The Russian Foreign Ministry described the attack as an act of terrorism. The gunman was killed at the scene by the police.

"Russia and Iran have put the most efforts to minimize civilian casualties during the liberation of Aleppo. But propaganda of our enemies, of Aleppo liberation opponents, who have in fact created this crisis in the region, has resulted in such a barbarous murder of the honored diplomat," Hossein Sheikholeslam said.

© AFP 2021 / OZAN KOSE
Russian Ambassador's Assassin Tried to Kill Russian-Turkish Partnership
He added that such provocations against Tehran and Moscow carried out in Turkey as the demonstrations held near the diplomatic missions of both Russia and Iran soon after the liberation of the embattled Syrian city, are being used by "the foes" to destabilize the situation in the region.

Soon after the liberation of Aleppo's parts controlled by militants several anti-Russian rallies were held near the buildings of the Russian diplomatic missions in both Istanbul and Ankara.