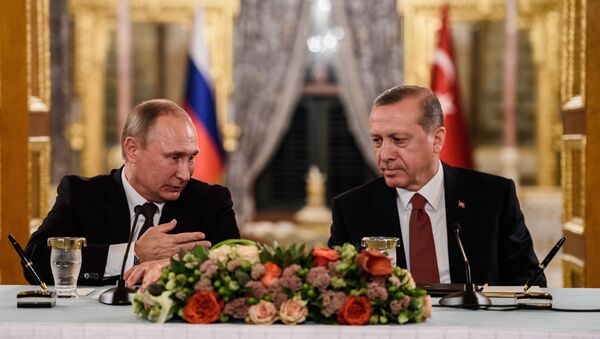 As the world begins to assess the consequences of the Russian ambassador’s assassination in Ankara, it appears that the assassin’s ultimate goal was to drive a wedge between Russia and Turkey.

Daily Fail: British Newspaper Blasted for Russian Ambassador Assassination Tweet
On Monday, December 19, Russian ambassador to Turkey Andrei Karlov was shot dead by Turkish police officer Mevlut Mert Altintas at the opening of an exhibition at an art gallery in Ankara. Three other people were also injured in the attack which Russian Foreign Ministry considers a terrorist act.

Dr. Özden Zeynep Oktav, a Professor of International Relations at the Istanbul Medeniyet University, told Radio Sputnik that the assassination was aimed to "undermine Turkish rapprochement with Russia" and to sabotage the attempts by Moscow and Ankara to help resolve the Syrian crisis.

"Mr Putin also supported Erdogan during the July coup attempt, therefore Erdogan and Putin are very much willing to cooperate with each other in Syria despite many divergencies," she said.

Dr Oktav pointed out that the assassination is in fact unlikely to have anything to do with the recently ended battle for Aleppo, and that it is hardly a coincidence that the Russian ambassador was murdered on the eve of a trilateral meeting in Moscow between the foreign ministers of Russia, Turkey and Iran on Syria. Nevertheless, she added, the killer’s efforts won’t be able to stop the peace process in the war-torn country.

Dr Oktav also remarked that apparently Karlov’s assassin managed to achieve an opposite result and bring the two countries closer instead of alienating them, as the Turkish public was outraged by the ambassador’s murder.