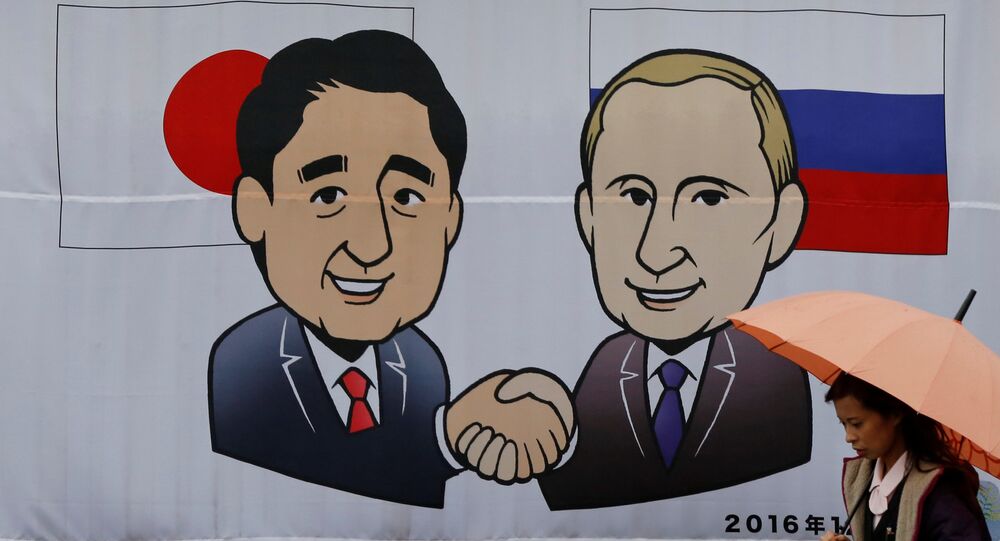 The initiation of joint economic activity between Russia and Japan in the Kuril Islands may become the first step towards the signing of a peace treaty between the countries. The new approach to the development of Japanese-Russian relations proposed by Shinzo Abe is just as driven by politics as it is by economics, Russian and Japanese experts say.

“I believe that joint economic activity in the Kuril Islands is really the first step toward the singing of a peace treaty. I am not sure yet if it will actually result in its signing, but I assume that it is a fundamentally new approach,” Ichiyo Ishikawa, a senior commentator for the Japanese broadcaster NHK, said during a video conference with Sputnik.

The commentator stressed that the eight-point plan for cooperation between Russia and Japan which Abe proposed to Putin during their meeting in Sochi on May 6 constitutes a new approach to strengthening relations between the two countries. According to Ishikawa, this plan is based on economic cooperation but has a political goal.

This opinion was shared by Valery Kistanov, the Director of the Center for Japanese Studies at the Institute of the Far East. Kistanov stressed that Putin’s recent visit to Japan reflected two sets of goals.

“Putin’s visit should be considered from both an economic and a political standpoint. It is commonly known that these two sides of Russian-Japanese relations have always been interconnected,” he said.

The emphasis has shifted between politics and the economy at different stages of the development of Russian-Japanese relations, the expert said. According to him, during the 1990s Japan preferred to keep these spheres separate, but it later adopted a policy of 'expanding balance', where every time Russia softened its stance on the Kuril Islands, Tokyo would seek economic cooperation. However, this didn't prove to be worthwhile, in Kistanov’s opinion.

“Now Prime Minister Abe has reversed these two components and put economy, not politics, in first place. That’s why I call Abe’s approach innovative. It appears that when he proposed his eight point plan to Putin, he expected Russia to appreciate the generous gesture in light of its economy being in a tight situation, and approach Japan regarding the territorial issue,” the expert said.

The progress that Russia and Japan made during the summit should be consolidated, Alexander Panov, former Deputy Minister of Foreign Affairs and head of the department of Diplomacy at the Moscow State Institute of International Relations, said.

“This window of opportunity which has opened now will not last forever. We should think of what happens when Abe leaves his post. Under a new prime minister, Japan’s policy on Russia might change, and we have to do something to prevent it from rolling back,” the diplomat said.

He also advised not to expect a peace treaty to be signed in the near future.

“All the expectations transmitted by TV shows in a scandalous way are entirely unjustified and do not reflect the level of relations Russia and Japan have developed yet,” Panov said.

The expert stressed that it is impossible to tackle the territorial issue in one or two round of talks; there is still a long way to go.

“Japan has finally agreed to develop joint economic activity on the island. I mean, it will contribute a lot to the creation of the appropriate atmosphere for conducting negotiations on the peace treaty,” he added.

General Director of the Russian Council on Foreign Affairs Andrei Kortunov, in his turn, agreed that the progress the countries managed to reach is unprecedented and this opportunity should be exploited and developed now.

“The Japanese Prime Minister displayed great political courage. I think he took a risk while understanding that it would not help him to get rating points inside his country. Regarding this, Abe is following some strategic line with long term prospects for Russian-Japanese relations,” Korotunov said.

According to him, the main issue is the determination of the countries to use this favorable outcome to generate some concrete agreements. “Unfortunately, the spotlight of authorities often shifts to something else after such important official meetings and many opportunities remain unrealized,” he added.

Moscow and Tokyo never signed a permanent peace treaty after World War II due to a disagreement over the group of islands which Russia calls the Southern Kurils and Japan the Northern Territories, encompassing Iturup, Kunashir, Shikotan and Habomai.