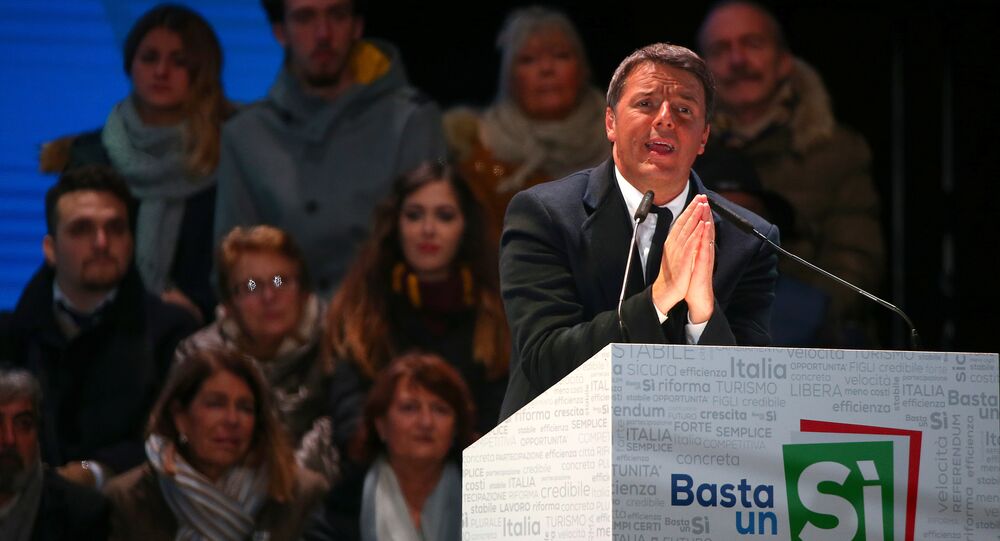 Italy's Referendum: Who's Won and What to Expect Next

Italians refused to support reforms championed by Prime Minister Matteo Renzi. Political analyst Mario Sommosa told Sputnik that all the parties have won from the "no" vote at the referendum, but added that it will be hard for them to reap the benefits and warned that the country is about to find itself in severe turbulence.

Sommosa pointed out that various political forces in the country had an array of reasons to advocate for a "no" vote.

"Some were uncomfortable with the constitutional reform, while the majority wanted Renzi to resign, although they did not take implications of this decision into account. Opposition parties wanted to change the balance of power in the anti-government coalition. Those disappointed in reforms wanted to remove the prime minister. Those who associated Renzi with the EU and euro, as well as those who consider the constitution to be sacrosanct also said no," he explained.

Regardless of what particular reason had prompted people to vote against the reforms, the end result will be a "political tragedy," the analyst added.

© AFP 2020 / Andreas SOLARO
A polling station officer prepares the counting of the ballots at the end of the vote for a referendum on constitutional reforms, on December 4, 2016 in a polling station in Rome.
© AP Photo / Geert Vanden Wijngaert
Post Renzi Worries 'Fake and Orchestrated', EU Has a Troika Flavored 'Plan B' for Italy
On Wednesday, Renzi submitted his resignation to President Sergio Mattarella, but indicated that he planned to remain at the helm of the center-left Democratic Party (PD). The consultations on the interim government are expected to begin on Thursday. If leading parties fail to agree, the president will announce early elections.

This is the scenario that the Five Star Movement and the Northern League advocate. "They hope that they will be able to increase their presence in center-right opposition," Sommosa explained."These parties are not concerned with political and economic instability that such actions will lead to."

Sommosa warned that the worst scenario will see some trying to use this mess to attack Italian bonds on the markets, similar to what happened after Silvio Berlusconi's government resigned.

© REUTERS / Max Rossi
Italy’s Referendum Another 'Case of Dissatisfaction With Politics as Usual'
"If major speculative attacks take place, then even Germany's tough stance will not be able to keep the situation under control. Italy's collapse will mean the euro's collapse. It could also possibly spell the end of the European Union itself," he said.

This is not to say that the victory of the "yes" vote at the recent referendum would have made the Italian economy stronger and more stable.

"However, it is clear that following the 'no' vote Italy will be plagued by weeks if not months of severe political turbulence. One cannot rule out that some people are ready to use this period of weakness in their own interests," Sommosa observed.

© REUTERS / Tony Gentile
What Next? Europe After Italy’s Referendum
On December 4, more than 59 percent of Italians rejected a major constitutional reform initiative put forward by Prime Minister Matteo Renzi. The bill was meant to limit Senate powers in order to speed up the lawmaking process and alter the division of powers between the state, the regions and administrative entities. The referendum was largely viewed as a vote on Renzi's leadership.