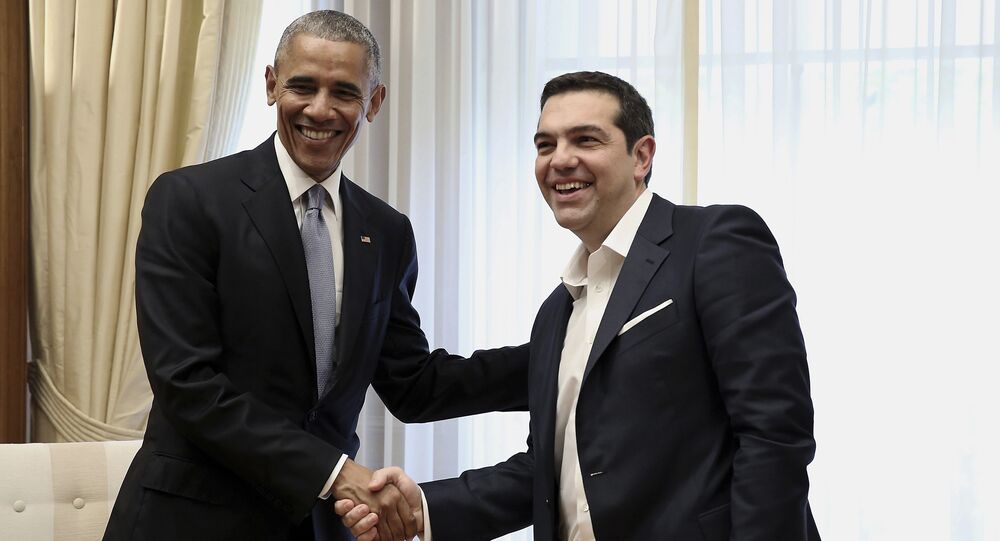 US President Barack Obama and Greek Prime Minister Alexis Tsipras discussed the need to maintain sanctions against Russia, Obama said at a joint news conference in Athens on Tuesday.

WASHINGTON (Sputnik) — Obama is in Greece as part of his final foreign trip, which also includes stops in Germany and Peru.

"We also discussed…the importance of keeping sanctions, including EU sanctions, in place until Russia has fully implemented the Minsk agreement along with Ukraine," Obama told reporters.

The United States, the European Union and some of their allies have imposed several rounds of sanctions against Moscow over Crimea’s reunification with Russia and Moscow's alleged involvement in the conflict in Ukraine, which started as Kiev launched a military operation in the country's eastern regions in April 2014.

© RIA Novosti . Alexei Bogdanovsky
Obama Expected to Demand Greece Close its Ports to Russian Warships
In response, Moscow imposed a year-long food embargo on the countries that had sanctioned it, which was later prolonged as the sanctions were extended.

Greek officials has repeatedly called for the lifting of sanctions against Russia that have damaged European businesses.

Obama vowed to continue to urge Greece’s international creditors to forgive some of its debts.

"As Greece continues reform, the IMF [International Monetary Fund] has said that debt relief is crucial," Obama said. "I will continue to urge creditors to take the steps needed to put Greece on a path towards a durable economic recovery."