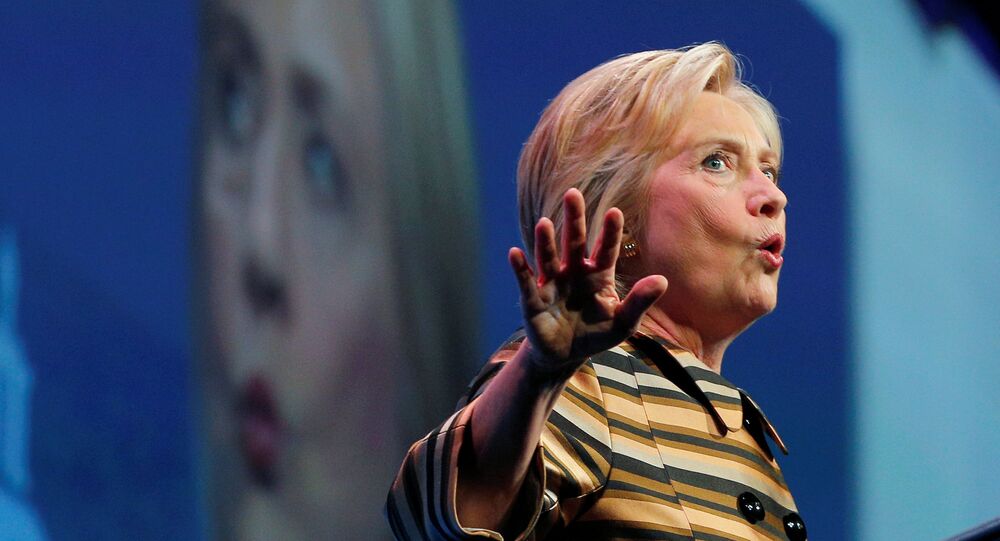 The US Democratic Party continues to play the "Russian scare card" as part of its election campaign, criticizing Republicans for merely making positive remarks about Russia and its leader; former US diplomat and advisor to the US Senate's Republican leadership James George Jatras tells Sputnik what rationale lies behind the Russophobic rhetoric.

© Sputnik / Natalia Seliverstova
US Keeps Using 'Russian Card' in Elections, Moscow Sees 'Blatant Russophobia'
"It would be much nicer if this card played a positive role," Kremlin spokesman Dmitry Peskov said on Wednesday, when asked about US presidential candidates’ statements regarding Russia.

According to the spokesman, Kremlin still witnesses manifestations of "frequent blatant Russophobia."

The comment comes in the follow up to the most recent example of such rhetoric, when Barack Obama harshly criticized Republican presidential candidate Donald Trump over his positive remarks about Russian President Vladimir Putin.

The statements were made during his Tuesday’s campaign speech for Democratic presidential nominee Hillary Clinton.

Former US diplomat and advisor to the US Senate's Republican leadership James George Jatras provided his own rationale behind the remarks when discussing the issue with Radio Sputnik.

"The immediate one, of course, is that [Obama] is going to go out there as surrogate-in-chief and fill in a place while Hillary is convalescent somewhere, I guess, from whatever her health issues are that they continue to lie about," he said.

"Plus she is recovering politically, if she can, from that ridiculous comment a few days ago, calling essentially a quarter of the American electorate 'deplorables'. So, she's got some real problems," the former diplomat explained.

"So I think [Obama] is going out there with this whole "Russophobic meme" to try to distract from that and go on the offensive while they figure out how to get her back on her feet," he further suggested.

James George Jatras however explained why such rhetoric could not be called a wise pattern of the US foreign policy.

© AP Photo / Susan Walsh
'Role Model'? Obama Points Finger at Trump Over His Stance on Putin
"Let's put it in the context of the American history, going back to the Cold War with the Soviet Union: Roosevelt and Stalin, Eisenhower and Khrushchev, Nixon-Brezhnev, Reagan-Gorbachev  — it was always a priority in the American foreign policy to get along with leaders of the Soviet Union back when the USSR was communist," he said.

"But now, when Russia is not communist, it has not been for a quarter of a century, it is somehow "over the top" to suggest: hey, maybe we should begin getting along with these guys," he noted.

The advisor explained that many people mistakenly believe that anti-Russian sentiment in the US is just the "Cold War hangover" from anti-communism. There is some of that, including on the Republican side, he acknowledged.

However what is interesting is that now Russia is not communist anymore and in many respects it is a rather conservative country where the Church plays a strong role in public life.

"The Russians, he noted, don't go along with a lot of the things here like same sex marriage, transgenderism and all the other silliness we see in America and Europe today," he noted.

© Sputnik / Sergei Guneev
Obama Compares Putin’s Approval Rating With Saddam Hussein’s Poll Numbers
"A lot of progressives really-really-really hate Russia. They look at it as at almost a failure that ruined this "great progressive experiment" called communism and they really resent it and hate it. So you actually find much more Russophobia in the US on the progressive side today," the former diplomat said.

James George Jatras also explained the rationale behind the harsh comments about Trump from the Democratic camp and the overall attitude towards the Republican nominee.

Hillary is the candidate of the "deep state", of the oligarchy, he said.  In effect. the way the script was supposed to run was that the corresponding co-candidate should have been Jeb Bush so that "we have "Tweedledee – Tweedledum" choices like we usually get."

However there were "insurgencies" in both parties. Bernie (Sanders) on the democratic side and Trump on the Republican side.

"Bernie was stump through the rigged system. However Trump somehow, nobody quite understands how, managed to beat the oligarchy in the Republican party. And that is why you see so much in the establishment, not just in the Democratic party, but a lot of the Republican establishment plus all the media and all the people connected with all the big money and politics are all against Trump and for Hillary," he said.

Commenting on the health issues of the Democratic nominee and the prospects of her further participation in the presidential race, the former diplomat noted that "Hillary, unless she actually dies, will hang on with her fingernails to the very last minute and she will probably succeed in remaining the nominee."

He also pointed out one reason why people are really concerned about Hillary's political and physical viability and might not want to see her go is that they realize there will be "blood bath in the Democratic party while deciding who succeeds her."

However, he said, the prospects are graver if she actually wins the race.

"Let's be  brutally clear about this: Hillary is the candidate of an endless war," he said.

"Look at the  people surrounding her: Mike Morell, acting former director of the CIA who wants to assassinate Russians in Syria; you have Michele Flournoy, (the former Defense Department official) who wants to start bombing in Syria as soon as Hillary takes office, when she becomes secretary of defense."

"Hillary has never met a war she does not like. She is a true believer in the idea that the US can, as this vanguard of all progressive humanity, use military force to transform the world. We are looking at numerous regional wars and very possible at nuclear war with Russia or China, or both," he finally stated.