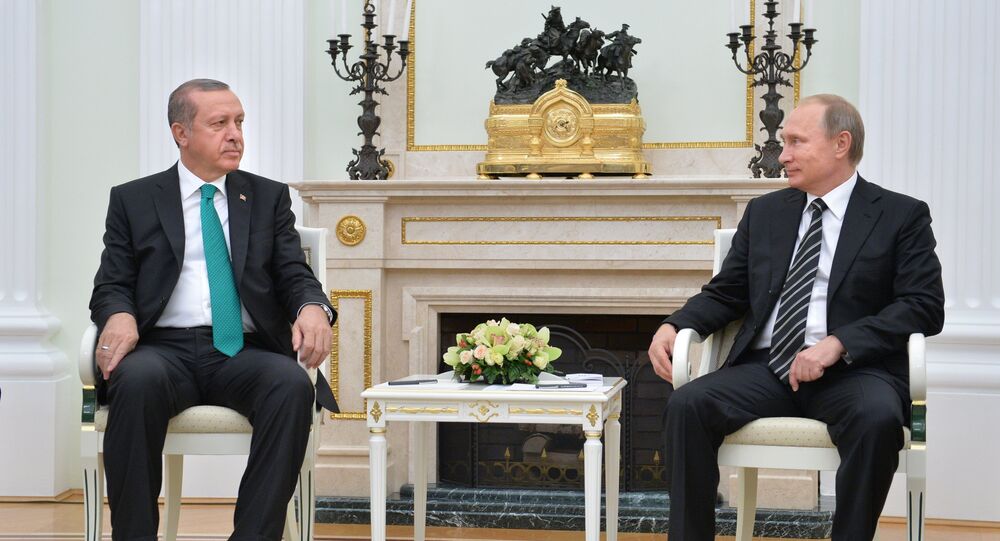 US and Allies 'Worried' by Turkey's Friendship With Russia

© AP Photo / Emrah Gurel
From Flying to Flagging: Economic Troubles Force Turkey Into Compliance
As the EU still appears reluctant to admit Turkey and the US refuses to give up the alleged mastermind of a recent coup attempt, the prospects of an alliance with Russia have become more and more attractive to Ankara.

The meeting between Putin and Erdogan, scheduled to take place in Moscow on August 9, should be interpreted as a sign of reconciliation between the two countries. The Western nations, already spooked by the purges that followed the unsuccessful coup in Turkey, have every reason to worry about this development, according to the Swiss news magazine L’Hebdo.

"The day following the unsuccessful coup, Russian-Turkey relations rapidly took a turn for the better," the magazine points out.

Furthermore, it is rumored that Russia actually warned the Turkish president about the impending coup hours before a team of renegade commandos stormed the hotel where Erdogan was staying, and a statement issued by Turkish Foreign Minister Mevlüt Çavuşoğlu apparently lends credence to this theory, according to L’Hebdo.

"During the coup attempt, Russia provided us with full and unconditional support. We thank Vladimir Putin and all of Russia’s officials… Russia is not just our friend and close neighbor, but a strategic partner as well," the minister declared.

The Turkish army, numbering some 315,000 men, is the second-most numerous armed force in NATO, and Turkey itself is situated "in a strategic location at the border between the West and the Arab World, the Caucasus and Russia." Additionally, the US-led anti-Daesh coalition depends greatly on Turkish military infrastructure – the Incirlik airbase in particular – in its ongoing campaign against the terrorist group, the magazine points out.

And while Erdogan is unlikely to consider withdrawing his country from NATO, by maintaining friendly relations with Putin the Turkish leader is sending a clear signal that he won't allow himself to be bullied.

At the same time, while initially Russia and Turkey were backing the opposing sides of the Syrian conflict, now Erdogan apparently no longer believes that supporting the rebels in Syria is such a good idea. His intent to prevent the creation of a Kurdish state right next to Turkey's border makes Putin’s help quite desirable. Therefore, the two nations now apparently have more reasons to make peace with each other, not to mention that this development may significantly alter the balance of power in Syria.