Japanese Prime Minister Shinzo Abe expressed his confidence in a looming "breakthrough" in relations with Moscow after his meeting with President Putin in Sochi last week. According to experts speaking to Sputnik, such a breakthrough may have already taken place.

Reporting before the leadership of the ruling Liberal Democratic Party after his return to Japan, Abe said that active negotiations with Russia would continue at the highest level, and would include the problem of Kuril Islands, known in Japan as the 'Northern Territories'. The territorial issue has turned out to be one of the key problems holding back Russian-Japanese relations in the aftermath of the Second World War, and a formal peace treaty between Moscow and Tokyo has yet to be signed, over seven decades after the end of the war.

© AFP 2019 / Pavel Golovkin / POOL
Abe's Russia Visit: The Real Reason Behind Japanese PM’s Trip to Sochi
Given the apparent absence of any change in Tokyo's basic position on the South Kurils (which is that their transfer to Japan is non-negotiable), Japanese and some Russian political analysts have argued that the Japanese prime minister's meeting with the Russian president produced more vague and contradictory formulations than it did real answers on the possible direction of relations between the two countries.

However, experts speaking to Sputnik suggest that a breakthrough has already been made.

Valentina Kistanova, the director of the Center for Japanese Studies at the Russian Institute of East Asian Studies, says that the Japanese prime minister is serious about resolving the decades-long territorial dispute.

"We have seen plenty of similar statements from both sides in the past. But I think that Abe really does want to go down in history as the leader who managed to resolve this problem, which has overshadowed relations between the two countries for 70 years now."

"In his own time," Kistanova recalled, "Abe's father, Shintaro Abe, did a great deal of work as minister of foreign affairs to invite Soviet President Mikhail Gorbachev to Japan. At that time, Gorbachev moved away from Moscow's previous position, which was that the territorial issue does not exist, and believed that it was necessary to at least discuss the issue. At the time, Shintaro Abe was fighting cancer, but left his hospital bed for the sake of a personal meeting with Gorbachev. This shows how important the issue was for him, and that it is likely just as important for his son." 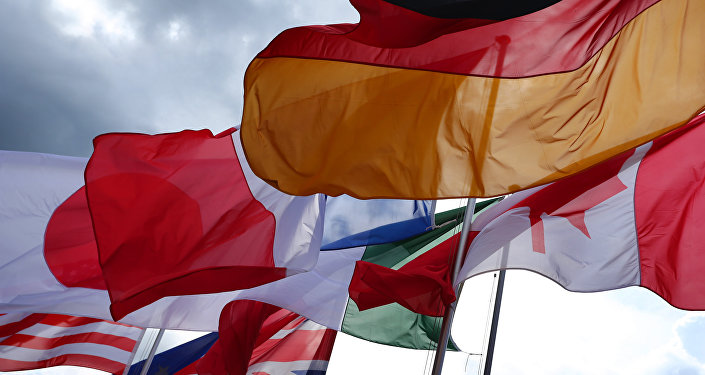 © AFP 2019 / KARL-JOSEF HILDENBRAND
G7, EU Unity Remains Vital in Approach to Russia After Putin, Abe Meeting - US State Dept.
Today, the analyst says, "the steps taken by the Japanese prime minister toward Russia can really be called decisive, since he is taking them despite strong pressure from Washington.  Factually, Abe today is serving as the G7's 'strikebreaker', breaking out of the system and ignoring the policy of sanctions and pressure against Russia. Washington has repeatedly warned Abe that the present is not the time to travel to Russia. But Abe, it seems, is determined to make progress in negotiations with Moscow."

For his part, Alexander Panov, a Russian diplomat who served as the Russian ambassador to Japan between 1996 and 2003, suggested that in his opinion, the very fact of Abe's Russia visit served as a breakthrough in relations between the two countries.

"Abe's visit to Sochi was extremely positive, because it immediately added a new momentum to relations. Japan has essentially left the West's system of sanctions against Russia, even if nobody said as much officially. If one looks at the proposals Abe brought to Sochi, one can see breakthroughs in almost every area and on some very important points. The political dialogue has been revitalized. And this year [the dialogue] will be intense like never before, with over five summits scheduled. This includes Abe's acceptance to attend the [Eastern Economic Summit] in Vladivostok [in September], on the Russian side's invitation." 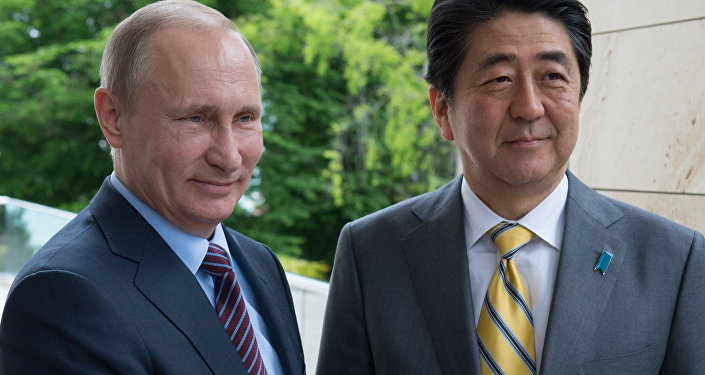 © Sputnik / Sergei Guneev
Russian President, Japanese PM Seek New Approach to Old Spat Over Kurils
In the economic sphere, Panov notes, "Abe also presented [the Russian side] with the Japanese plan for developing cooperation, which even includes industries that fell under Western sanctions. This includes cooperation in high tech and the nuclear power industry, as well as cooperation in Siberia and the Far East, where the construction of infrastructure will require Japanese investment. And this too indicates a Japanese exit from the West's sanctions policy."

Finally, the diplomat says, "with regard to the territorial issue, some new elements in Japanese policy seem to have emerged. In any case, commenting on Abe's one-on-one meeting with Putin, the president's press secretary said that the issue was discussed 'in a very constructive way'. Yes, Abe said that Japan's position on the demand to return the four islands has not changed, but he also said that new ideas would be used in negotiations that would be free of earlier thinking."

"And the Russian side positively assessed this approach from the Japanese side, since it gives a new basis for further negotiations. After all, negotiations on a peace treaty remained impossible only so long as Japan's position remained fixed and unchanging," Panov concludes.

Putin: Japan Not Just a Neighbor, But Important Partner for Russia