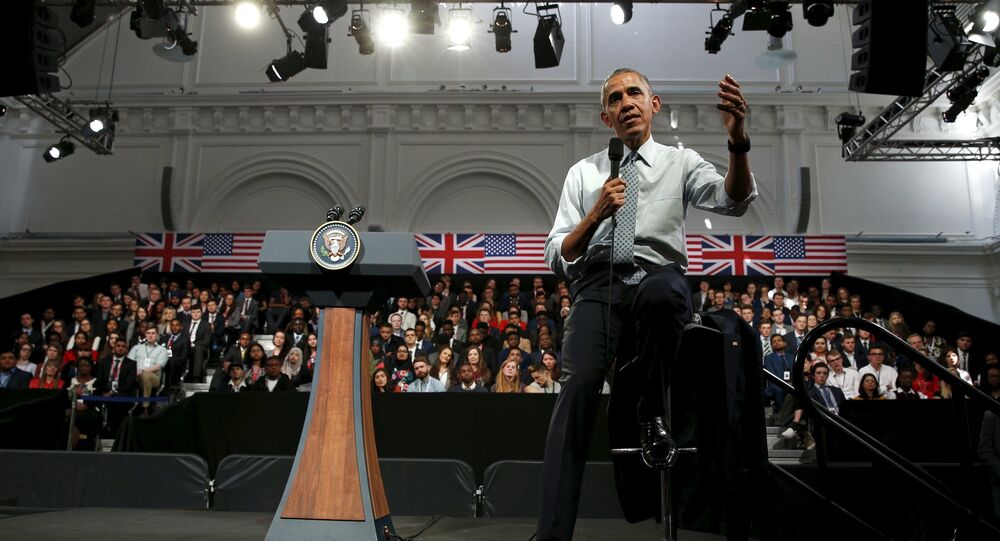 US President Barack Obama said that he "implores" British youngsters to reject new calls for isolationism or xenophobia.

MOSCOW (Sputnik) — US President Barack Obama called on the British youngsters to reject isolationism as future development route during his Saturday speech at a town hall event in London.

​“The challenges of our time – economic inequality, the climate change, terrorism, migration – all these things are real, and in the age of instant information – where TV and Twitter can feed us a steady stream of bad news, I know that it could sometime seem like the order that we’ve created is fragile, maybe even crumbling, maybe the center cannot hold, and we see new calls for isolationism or xenophobia, we see those who would call for rolling back the rights of people,” Obama said.

Obama tours London theater, watches "to be or not to be" soliloquy: https://t.co/f2p6PvT9FP pic.twitter.com/IurJMJZZSC

​“Those impulses, I think we can understand, they are reactions to changing time and uncertainty, but when I speak to young people I implore them and I implore you to reject those calls to pull back. I'm here to ask you to reject the notion that we are gripped by forces that we can't control and I want you to take a longer and more optimistic view on history and the part that you can play in it,” he added.

​On Friday, Obama told reporters during a press conference with UK Prime Minister David Cameron that the upcoming British vote on whether Britain should leave the European Union is of deep interest to the United States while "the United Kingdom is at its best when helping to lead a strong Europe."

Earlier on Friday, British media reported that a majority of UK voters believe that Obama should not intervene in the EU referendum campaign.

UK citizens are set to vote on June 23 in a referendum on the country's EU membership, after Cameron and the leaders of the 27 EU member states reached a deal in February to grant Great Britain a special status within the bloc.