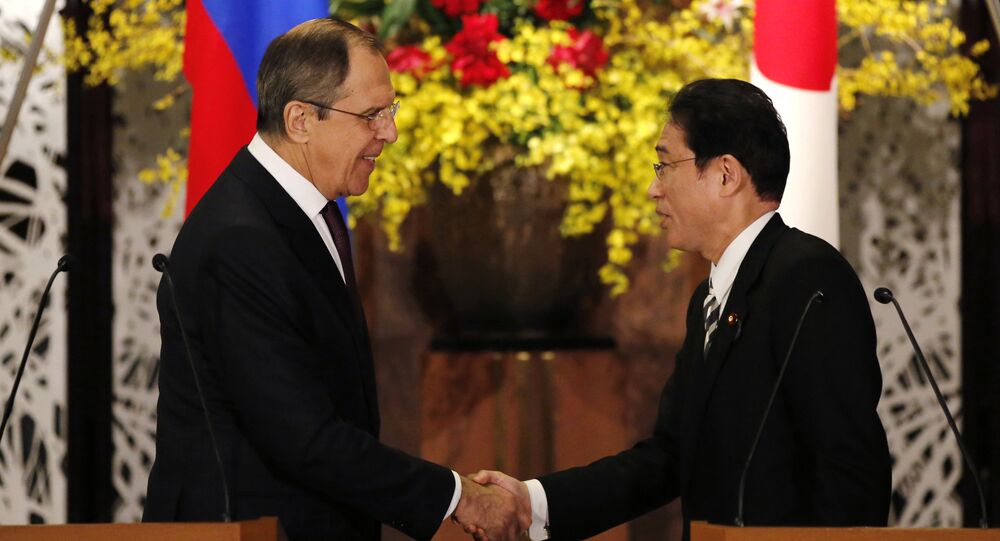 Russian Foreign Minister Sergei Lavrov concluded his official visit to Japan on Saturday, the visit aimed at laying the groundwork for improved relations between Moscow and Tokyo, and to iron out details on a future visit to Russia by Prime Minister Shinzo Abe. Russian business magazine Expert mulls the prospects for Russian-Japanese relations.

© AP Photo / Mikhail Klimentyev, Kremlin Pool Photo via AP
Russian Officials Favor Faster Development of Relations With Japan
On April 15, Lavrov arrived in Tokyo for a two-day official visit, discussing political and economic issues, as well as Prime Minister Abe's possible Russia visit, whose date is yet to be determined. Ties between the two countries deteriorated two years ago after Tokyo announced that it would support Western economic sanctions imposed on Moscow over its alleged interference in Ukraine, but the lack of stable relations actually goes back decades.

Commenting on the background to the diplomatic good will visit in an analysis for Russian business magazine Expert, Russian geopolitical analyst Gevorg Mirzayan noted that at first glance, "Russian Japanese relations are exceptional in their astonishing irrationality."

"It would seem that both countries would benefit from almost a strategic partnership level of relations. Russia can offer Japan the energy it requires, as well as resources and a market for the expansion of Japanese capital. But more importantly, the Kremlin could become a geopolitical balance, helping Tokyo to find a formula to defend against an ever-strengthening China. After all, Russia is one of the few countries in the region that does not hold animosity for Tokyo over Japan's war crimes in the first half of the 20th century."

"In turn," Mirzayan notes, "Japan can provide Russia with technology, industrial goods, investment and innovations, and actively participate in the development of the Russian Far East."

© REUTERS / Kyodo
Russia Ready to Assist Japan After 6.5-Magnitude Quake Hits Country
"And all these opportunities cannot be realized simply because," nearly 71 years after the conclusion of the Second World War, "Russia and Japan still have no peace treaty" between them.

"The Kremlin," for its part, "is ready to sign such a treaty immediately, and then begin to build a strategic partnership…Without effective cooperation with Japan, there can be no complete 'eastern pivot' in Russian foreign policy, but only a 'Chinese tilt'."

"However, Tokyo has one condition: the Japanese want the South Kuril Islands, which the USSR took from Japan after the Second World War."

"The problem of the peace treaty is the issue of the northern territories," Japanese Foreign Minister Fumio Kishida said ahead of Lavrov's visit, referring to the Kuriles.

© Sputnik / Grigoriy Sisoev
Japan Hopes to Address WWII Peace Treaty With Russia at Ministerial Talks
Center for Asia and Pacific Studies head Vasily Mikheev recalls that Russia's leadership "was willing, in 2004, to make a compromise along the lines of the 1956 proposal – to transfer two islands and sign the peace treaty after that. For us, two of the four islands is the compromise. Japan has held and continues to hold a different position: for them these two islands are just the start of negotiations in which a compromise can be found, which should include at least a third island."

Moreover, according to Center for Japanese Studies head Valeria Kistanova, Tokyo has also suggested another option: that Russia gives up two islands now and two more at a later point.

In any case, Mirzayan notes, now "Russia is not planning on giving anything up," as the Foreign Ministry's statement shortly before Lavrov's departure made perfectly clear. The statement clearly said that progress on any peace treaty "would remain impossible without Japan's recognition of post-war realities."

"And Russia's stubbornness can be explained not only by the fact that Moscow does not want to throw away its strategic territories, and not just because Japan needs the peace treaty and an improvement in relations more than Russia does…but also because the Kremlin is not convinced in the reliability of any agreements with Japan."

© Sputnik / Alexei Filippov
Washington's Influence on Tokyo 'Bad' for Russia-Japan Relations
"The specific character of the Japanese-US alliance show that Tokyo is occasionally forced to subordinate its interests to those of the Americans. For example, because of US pressure, the Japanese were forced to join in on the West's anti-Russian sanctions, and cancel a number of high-level meetings between officials. This, of course, is something Lavrov reminded his partners about in Tokyo."

"In order to find compromise, it is necessary to maintain a continuous, uninterrupted dialogue. But Japan made the decision to limit contacts with us at a certain point. In my opinion, this does not meet the interests of the Japanese government or the Japanese people," Lavrov emphasized.

At the same time, the minister noted that "despite pressure from its partners, and particularly the United States, our Japanese friends are nevertheless committed to maintaining these relationships."

There are other options, Mirzayan explained, for solving the territorial dispute that do not involve Russia giving up its sovereignty over the Kuriles. This, for example, may include the creation of a special economic zone with preferences for Japanese investment. "Such a scenario would bring a number of benefits for both Japan (with Prime Minister Abe being able to say that he has returned partial control over the islands), and for Russia, since Japanese investments would help the islands' economy."

© Sputnik / Sergey Krivosheyev
Russia’s Deployment on the Kurils Signals Severe Limitations for US 'Pivot to Asia'
"It appears that this will be one of the topics to be discussed by Abe during his visit to Russia," which could be held as soon as next month. "The Japanese prime minister is set on resolving the territorial issue (and has himself said so more than once) and is ready to discuss the various options personally with Vladimir Putin."

"These discussions would continue, most likely in Tokyo, where the Russian president would arrive with a return visit," a prospect which requires only the setting of a specific date, according to the Russian Foreign Ministry.

"Experts and diplomats acknowledge that they have been preparing this series of visits for several months. The main obstacle had been for Abe and Putin to voice at least a framework for a compromise. And given that the visits have been discussed, this seems to indicate that a formula for a compromise framework has finally been determined," Mirzayan concludes.