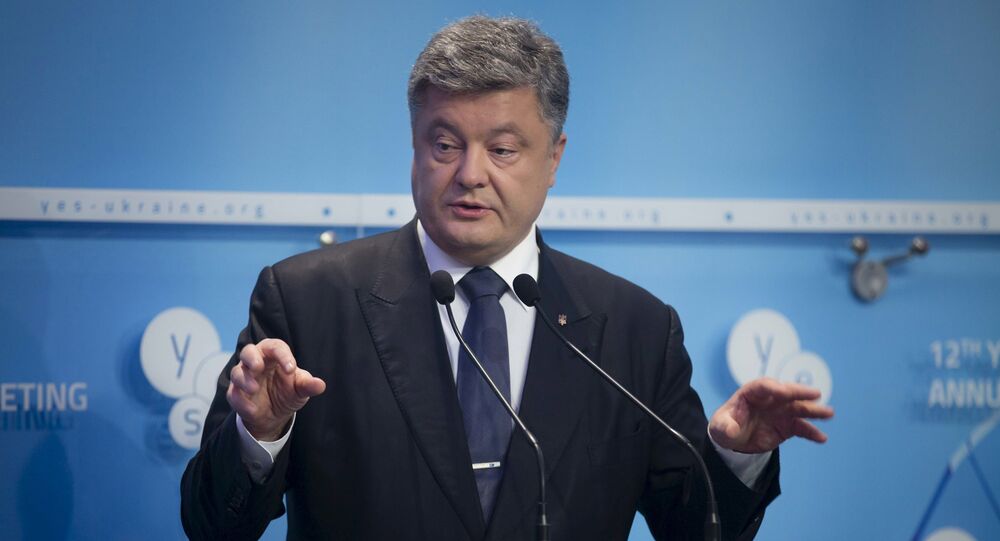 Ukraine's presidential spokesman accused the Russian intelligence services of trying to forge an interview of President Petro Poroshenko to The New York Times.

© Sputnik / Alexandr Maximenko
Poroshenko Administration at Helm of Rampant Ukrainian Corruption
MOSCOW (Sputnik) — Earlier this month, the US newspaper published an article where it called Ukraine a "corrupt swamp" which could no longer be fed by the Western money, and Kiev could not expect more aid unless serious reforms were implemented in the country. The publication also portrayed Poroshenko as accepting corruption as the price to pay for his time in office.

"Russian intelligence services continue the hybrid war against Ukraine with the help of a fake letterhead, they tried to arrange an interview with American newspaper New York Times, on behalf of the President of Ukraine," Svyatoslav Tsegolko said on his Facebook page late Tuesday.

The spokesman attached an image which had the appearance of Poroshenko's letter addressing New York Times Executive Editor Dean Bacquet, where Ukraine's leader requested a telephone conference to debunk the statements issued in the article.

Since the overthrow of former Ukrainian President Victor Yanukovych in 2014, the United States has provided Ukraine with two loan guarantees worth $2 billion and hundreds of millions in other assistance.

Earlier this month, Washington announced that Kiev could get a third tranche of loan guarantees, as well as aid from other international financial institutions, if a new government focused on comprehensive reforms were formed.