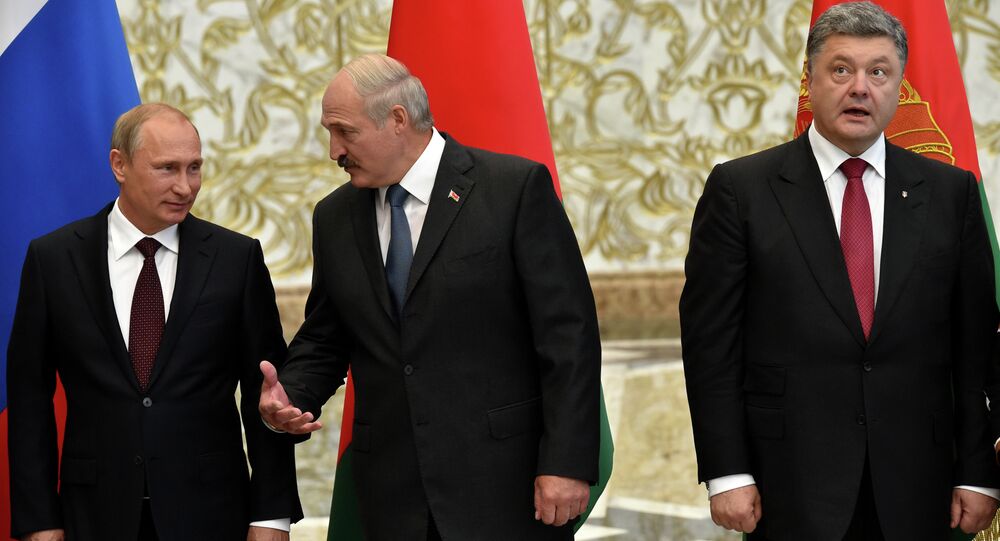 For Kiev, Moscow is Simultaneously 'Aggressor' and 'Close Friend'

Late last week, well-known Ukrainian political scientist Mikhail Pogrebinsky pointed to an odd paradox in post-Maidan's Kiev's relations with Moscow: On the one hand, he said, Kiev has officially declared that Russia is an 'aggressor nation'; on the other, Ukraine continues to adhere to the 1997 Russian-Ukrainian Treaty of Friendship.

© AFP 2019 / ALAIN JOCARD
Sensing Defeat: Kiev Pressures Brussels for Its Vendetta Against Moscow
Last year, Ukrainian authorities updated the country's military doctrine, naming Russia as an 'aggressor nation', and labelling Moscow the main military threat to the country. Prior to its codification into law, the mantra had been repeated by Ukrainian authorities for nearly two years, since shortly after the Maidan coup d'état, which resulted in Crimea breaking away from Kiev and rejoining Russia, and two of the country's eastern regions rising up in protest. The protests eventually morphed into a civil war after Kiev authorities sent military forces to crush the uprisings, a situation for which Kiev has blamed Moscow.

Despite the dramatic worsening in diplomatic relations, Kiev has refused to abrogate the 1997 Russian-Ukrainian Treaty on Friendship, Cooperation and Partnership, which served as a border and security treaty, and enshrined the principle of strategic cooperation between the two countries. The treaty, extended in 2008, allows either party to withdraw from the treaty after informing the other party of its intention to do so.

Speaking at a press conference in Kiev on Friday, Mikhail Pogrebinsky, a prominent Ukrainian political scientist and the head of the Kiev Center for Political and Conflict Studies, pointed out the legal and political paradox of the current situation, and suggested that it was an indication that Ukraine, no matter how combative its rhetoric may get, has no intention of denouncing the treaty which lays at the basis of its diplomatic relations with its eastern neighbor.

"Overall, for me all this looks rather strange…It's impossible for the law to simultaneously recognize Russia as an aggressor and for an international treaty according to which Russia is a strategic partner, a friend, a brother nation, etc. to continue to function. Why hasn't it been denounced? Because the treaty includes commitments and provides for the recognition of borders. Therefore, [Kiev] doesn't really feel like denouncing it," Pogrebinsky said.

© REUTERS / Valentyn Ogirenko
Ukrainian Lawmakers Fight Over Law Which Could Make All Property Illegal
Alexander Shpunt, the director of the Moscow-based Institute of Political Analysis Instruments, was asked by the Russian newspaper Svobodnaya Pressa to comment on the analyst's remarks, and about the confused duality of the Ukrainian political establishment's position toward Russia. He explained that the paradox actually has several manifestations.

"A paradox exists which is even more ridiculous," the analyst noted. "Ukraine's parliament has adopted a law which says that part of the territory of Donbass is occupied. But this is the first case in global law where the fact of occupation is stated, but the occupant country is not specified; in the text of the law, Russia is simply not mentioned," despite the fact that in the past, Ukrainian authorities have repeatedly accused Moscow of sending thousands or even tens of thousands of troops to eastern Ukraine, without providing evidence to back up their claims.

Moreover, Shpunt noted, for all his faults, Ukrainian President Petro Poroshenko is at least a pragmatist, and is "not prone to tearing his shirt from his chest. He understands perfectly well that a complete rupture in relations with Russia would result in Ukraine falling into an economic abyss from which it would never recover. Ukraine has already felt the serious consequences of the break in economic ties with Russia, and a complete break, as I've said, is capable of leading the country to total collapse."

© AP Photo / Sergei Chuzavkov, file
Yatsenyuk’s Counsellor Resigns, Accuses Parliament of Wrecking Ukraine
At the same time, the analyst added, "one has to understand that there are now thousands of armed men in Ukraine who are not prone to obeying authorities and who call themselves patriots," referencing the ultranationalist battalions which arose in the midst of the Maidan protests. "If Poroshenko were to try to conduct even just a sensible policy toward Russia, he would immediately get a new Maidan on Independence Square, except this time it would be supported by armed nationalists from the start."

Therefore, Shpunt suggests, in an attempt to ensure his political survival, "Poroshenko is trying to sit on two chairs at once: on the one hand condemning Russia as an 'aggressor', and on the other – not terminating the Treaty on Friendship, Cooperation and Partnership."

For his part, Alexei Martynov, the director of the International Institutes for New States, told Svobodnaya Pressa that unfortunately, "the whole of the legal aspect of Ukrainian statehood was built on uninterrupted legal conflicts."

© Sputnik / Vitaliy Belousov
A Matter of Life and Death: Why Ukraine Needs Russia Like Never Before
"Therefore," the analyst noted, "in spite of its anti-Russian rhetoric, Kiev is not in a hurry to break its treaty of friendship with Russia. In addition to the revision of borders, such a break would require the revision of a large number of inter-governmental agreements on cooperation in almost every area."

"It is believed that most of the connections, including economic ones, between Russia and Ukraine have [already been] torn, at Kiev's behest. However, if we look at relations between the two countries on the whole, we will find that the vast majority of ties actually remain in place. Abandoning all forms of cooperation is something Ukraine cannot do even in principle. Russia, of course, would also not like to see such a turn of events, but we will survive. For Ukraine, on the other hand, [such a step] would simply be disastrous."

In any case, Martynov noted, there is no chance that Moscow will abandon the treaty. "We will not do so. Unlike our Ukrainian brothers, we are capable of looking at the situation from above any immediate grievances we may have."

Sensing Defeat: Kiev Pressures Brussels for Its Vendetta Against Moscow

Ukrainian Lawmakers Fight Over Law Which Could Make All Property Illegal