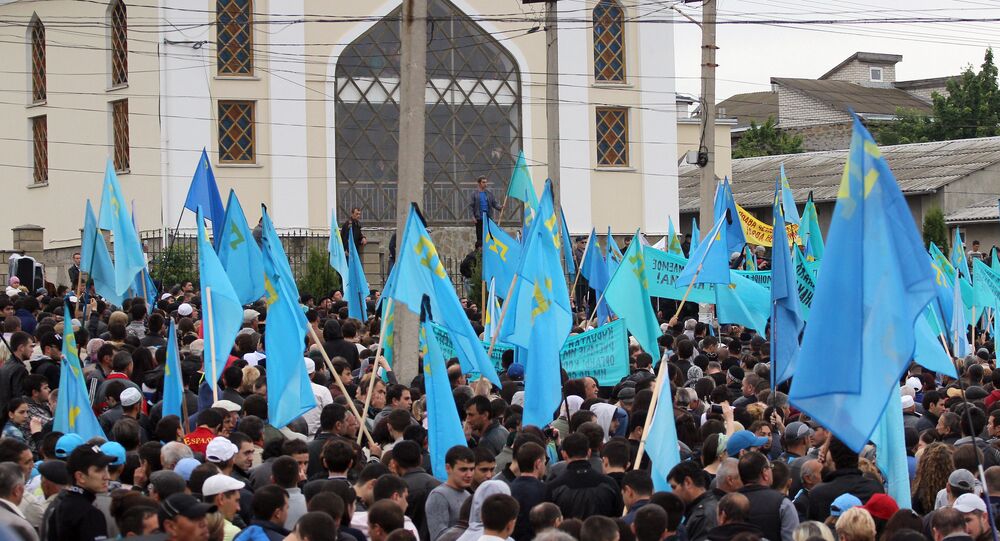 Ankara is calling on the UNHRC to prepare a report on the human rights situation in Crimea, particularly concerning the Crimean Tatar minority, Turkish Deputy Prime Minister Lutfi Elvan said earlier this week. Sputnik spoke with Unver Sel, the head of the Federation of Crimean Tatar Communities of Turkey, asking him to comment on the proposal.

On Monday, speaking at a session of the United Nations Human Rights Council (UNHRC) in Geneva, Deputy Prime Minister Elvan said that "Turkey remains extremely troubled by the cases of human rights violations in southeast Ukraine and the Autonomous Republic of Crimea with respect to the Crimean Tatar minority."

© AFP 2020 / MIGUEL MEDINA
Kurdish Women Protest in France, Draw Attention to Turkey's Atrocities
"We call upon the High Commissioner for Human Rights to prepare a separate report on the human rights situation in Crimea," the official added.

Asked for comment, Unver Sel, the president of the Federation of Crimean Tatar Communities of Turkey, told Sputnik Turkey that Ankara's move was nothing more than a demonstration of political opportunism.

The official noted that in almost two years after Crimea's referendum to break off from Ukraine and rejoin Russia following the Maidan coup in Kiev, Ankara, despite its sizable Crimean Tatar diaspora, was unable to form a clear position on the issue of Crimea and the Crimean Tatars.

"However, after the incident with the downed Russian plane, in the framework of its policy toward [both] Syria and Ukraine, Ankara actively declared its support for Kiev on the Crimean issue. After Prime Minister Davutoglu's trip to Kiev" last month, "Ankara's position on this matter underwent even more significant changes."

When asked to comment on the human rights situation on the peninsula as it relates to the Crimean Tatars, Sel stressed that prior to the referendum to join Russia, Crimea had a wide range of internal problems regarding the Crimean Tatars. These problems, the official suggested, had been in 'sleep mode' prior to the reunification, with the Tatars' situation in the years following Ukraine's independence in 1991 characterized by the defective functioning of legislation and Ukraine's legal system.

For this reason, Sel emphasized, it is incorrect to suggest that violations of the Crimean Tatars' rights began only after the peninsula's return to Russia. Moreover, the official noted, according to the information available to the Federation of Crimean Tatar Communities, there is no evidence of explicit and systematic violations of the rights of national minorities on the peninsula.

© Sputnik / Sergey Malgavko
Harmony Over Hatred: Ethnic Conflict in Crimea is a Western Media Myth
Ankara's approach, he added, is a purely political move, linked to the wider crisis in Russian-Turkish relations.

"On the peninsula, a number of arrests and detentions of persons suspected of being involved in radical Islamist groups have taken place. [However], this activity by law enforcement to detect and prevent the threat of terrorism cannot be interpreted as a violation of human rights," Sel emphasized.

Ultimately, Sel warned, "Ankara's consideration of the Crimean issue from the standpoint of supporting Ukraine will eventually lead to a rupture in the ties between Turkey and Crimea. If Turkey continues to pursue policies in this vein, this could lead to problems for Turkish citizens living in Crimea."

"Before the incident with the downed Russian aircraft, during preparations for the opening of the Cathedral Mosque in Moscow [last September], the Turkish government took a balanced and constructive position toward Crimea. Unfortunately, after this unfortunate incident, the Crimean issue came to be regarded as a tool with which to apply a certain level of pressure in the conflict between Turkey and Russia," Sel concluded.

Turkey is home to a major Crimean Tatar diaspora, estimated to number upwards of 150,000 people.

Harmony Over Hatred: Ethnic Conflict in Crimea is a Western Media Myth