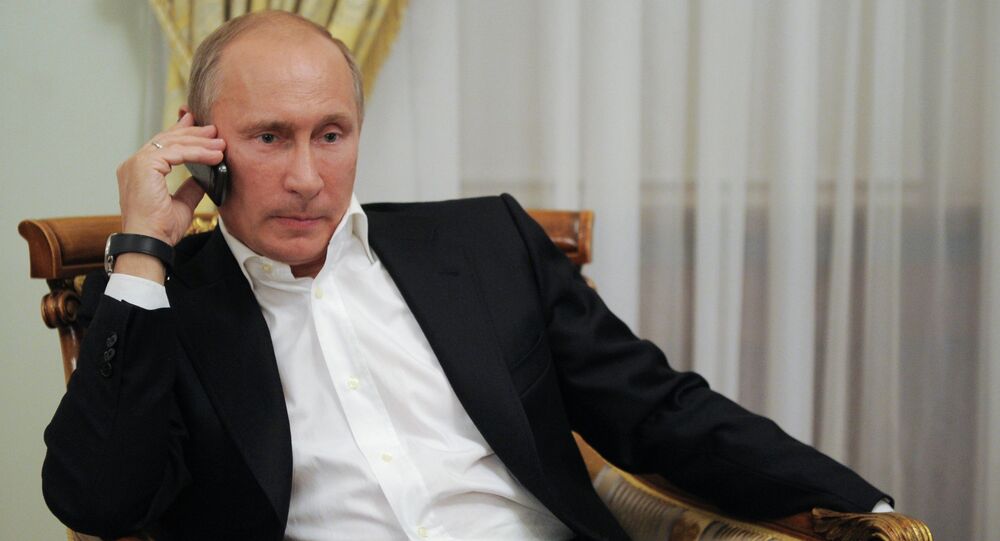 Putin on the Blitz: Russian President Spends Day on Phone to Middle East

While President Obama was dancing with a 106-year-old woman in the White House and concentrated mostly on the internal presidential campaign, President Putin held a “phone blitz” with a number of Middle East leaders, enhancing his authority as a key player in the region, according to an Israeli correspondent.

© AFP 2020 / Abd Doumany
Saudi King Welcomes Russia-US Plan on Syria Truce, Says Ready to Help
Roi Kais, a correspondent of the Israeli news website Ynetnews, has pointed out at a difference in the foreign policy of US President Obama and Russian President Putin: while the US leader was dancing in the White House, the Russian leader made what he called a phone blitz with a number of the Middle Eastern leaders.

The outlet acknowledges that the Russian President is playing a key role in brokering the “cessation of hostilities” which came into force on Saturday after drawing up plans with the US.

Vladimir Putin and Bashar Assad “discussed various aspects of the Syrian crisis in the light of realization of the Russian-American declaration on cessation of hostilities in Syria beginning February 27,” the Kremlin’s press service said in a statement.

Assad told Putin that his government was ready to help implement a cessation of hostilities.

The two leaders also stressed the need to continue fighting Islamic State and the al-Qaeda-linked al-Nusra Front, as well as "other terrorist groups," according to the official Twitter account of the Russian president.

Vladimir Putin and Bashar al-Assad have discussed the implementation of the Russian-US ceasefire plan for Syria https://t.co/9kQm0Tuswq

​While Moscow and Damascus remain in constant contact with each other, and share common ground on the political settlement in Syria, their positions do not coincide completely, Peskov noted. “Certainly there are differences,” he said.

The positions of the sides involved differ greatly, noted the Kremlin spokesman, adding that “extremely delicate work lies ahead.” Yet despite all the differences, if political will is applied, Moscow and Washington can reach “important results” – as in the case of Syria's chemical weapons – the presidential spokesman said.

Telephone conversation with the King of Saudi Arabia: settlement in Syria https://t.co/oCdUOCVAnC

​The Saudi monarch welcomed the agreements and “expressed readiness to cooperate with Russia to implement them,” the Kremlin said.

President Rouhani was also on the long list of leaders speaking to Vladimir Putin today, discussing “joint efforts to resolve the Syrian crisis”, according to the Russian President’s office.

​He was followed by the Prime Minister of Israel, who reportedly requested a call to discuss co-operation with Russia in the Middle East. Diplomatic relations between the countries continue to improve following the establishment of ties 25 years ago.

Merkel to Siberia and Putin to Berlin: Germans Voice Their Political Choice