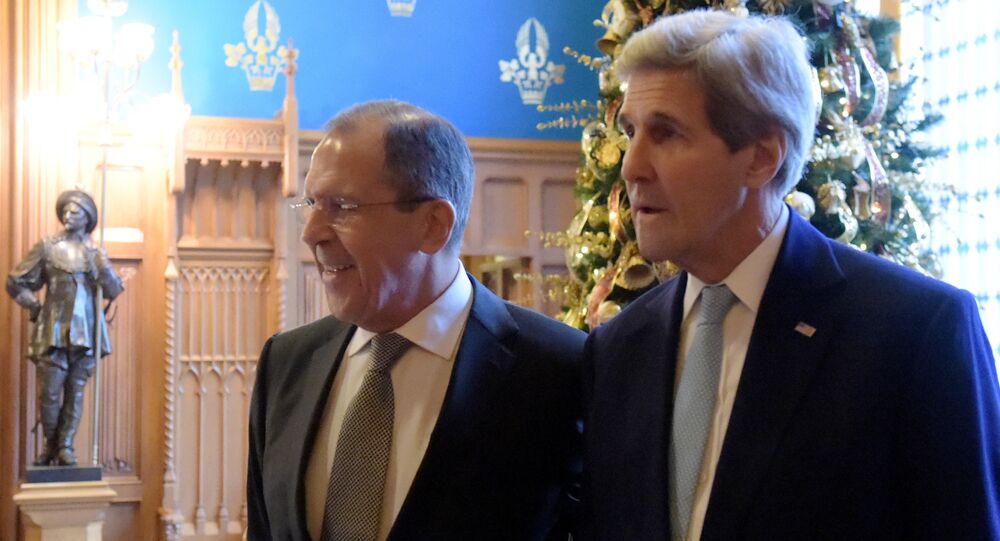 The two politicians held a phone talk earlier in the day, discussing humanitarian aid issues and the planned cessation of hostilities in Syria, "with the exception of fighting terrorist groups," the ministry said in a statement.

"It was confirmed that the establishment of mechanisms to reach set goals requires military coordination," the statement reads.

Lavrov and Kerry also noted progress when it comes to delivering humanitarian aid to besieged areas in Syria.

Russian Foreign Minister Sergei Lavrov noted during a phone talk with US Secretary of State John Kerry the importance of not allowing Turkey to violate Syria's territorial integrity.

"Lavrov also noted that provocative Turkish acts that violate the Syrian Arab Republic's territorial integrity are inadmissible," the ministry said in a statement.

© Sputnik / Eduard Pesov
Lavrov, Kerry Hold Meeting in Munich - Ministry
On February 13, Lavrov and Kerry already discussed the military cooperation of Russia and the United States in Syria at their meeting on the sidelines of the Munich Security Conference, according to the Russian Foreign Ministry. Following the talks, Kerry told reporters that the meeting went "excellent."

The consultations followed the International Syria Support Group (ISSG) meeting on February 11 that resulted in a final communique calling for swift humanitarian access to all besieged areas in Syria and setting a one-week deadline for measures to be implemented toward the "cessation of hostilities" in the country.