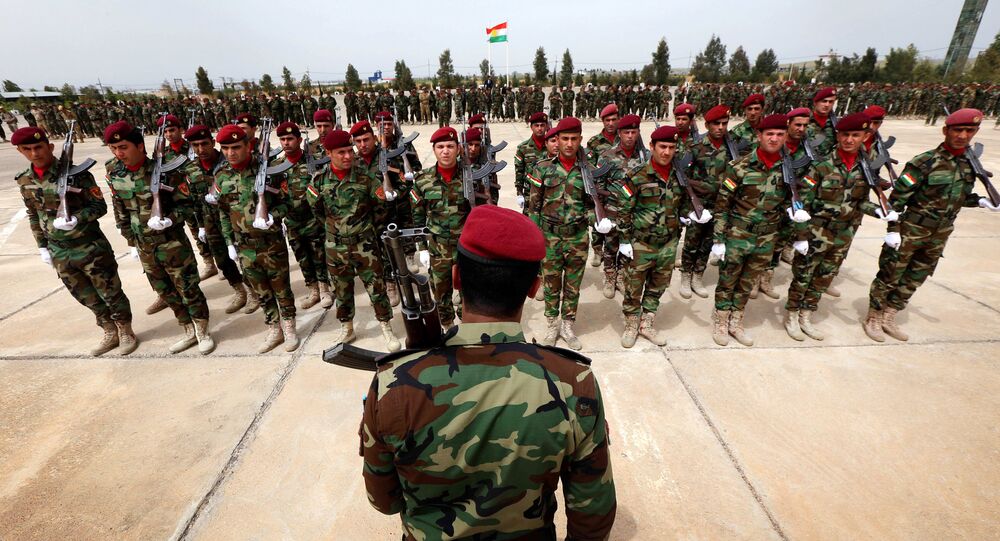 Low oil prices and the threat posed by Daesh (Islamic State/ISIL) are about to ruin the Kurds' aspirations for independence and prosperity, Irish journalist Patrick Oliver Cockburn notes.

The emergence of Daesh in Iraq and Syria has provided the countries' Kurdish minorities both with new challenges and new opportunities.

On the one hand, Syrian and Iraqi Kurdish enclaves created de-facto quasi states on the territories of Syria and Iraq. On the other hand, the ethnic group remains a minority vulnerable to a change in the political tides, Irish journalist Patrick Oliver Cockburn writes in his article for CounterPunch.org.

"The ISIS [Daesh] frontline is still only 40 minutes' drive from Irbil, the Kurdish capital [in northern Iraq], but fear that its fighters would break through has largely dissipated. But the jihadi onslaught, that reached its peak in the second half of 2014, was only one element in the crisis convulsing the de facto state (controlled by the KRG) that is being devastated by an economic catastrophe," Cockburn narrates.

© REUTERS / Kayhan Ozer/
'It’s a Power Game': Erdogan’s Ultimatum to Washington Decoded
After the overthrow of Iraqi leader Saddam Hussein in 2003, the Kurdistan Regional Government (KRG) advertised the autonomous region as "other Iraq" able to outperform the "dysfunctional" government in Baghdad.

It was expected that oil prices would remain high, providing the Kurdistan autonomous region with an opportunity of becoming an "oil state." Alas, the oil price slump of 2014 and the Daesh advance dealt a heavy blow to the Kurdish much-anticipated "economic miracle."

"Some Kurds were always skeptical about the vision of Kurdistan as an oil state, arguing against the creation of a system where people got a cut of the oil revenues without doing much work while the ruling elite received a license to plunder," Cockburn points out.

© Flickr / Victoria Pickering
Is the Honeymoon Officially Over? Turkey Summons US Ambassador Over Washington’s Stance on Kurds
The KRG warns that the crisis may result in desertions from Peshmerga, which fights against Daesh together with the US-led coalition forces. The Iraqi Kurdish government has requested financial aid from the international community.

Amid the ongoing economic crisis, Kurdish President Masoud Barzani announced that it is time to hold an independence referendum.

"Now the time is ripe for the people of Kurdistan to decide their future through a referendum. The referendum does not mean an immediate declaration of a state but to know the opinion and desire of the people of Kurdistan which the Kurdish political leadership will implement at an appropriate time and circumstance," Barzani said in an official statement, as quoted by the Erbil-based Rudaw media outlet.

The question arises, whether the Kurdish government has a plan on how to overcome financial hardships.

According to Cockburn, for the moment the Iraqi Kurds are politically and militarily strong, because foreign powers view them as an ally in the war against Daesh.

"But this will not last," he warns.