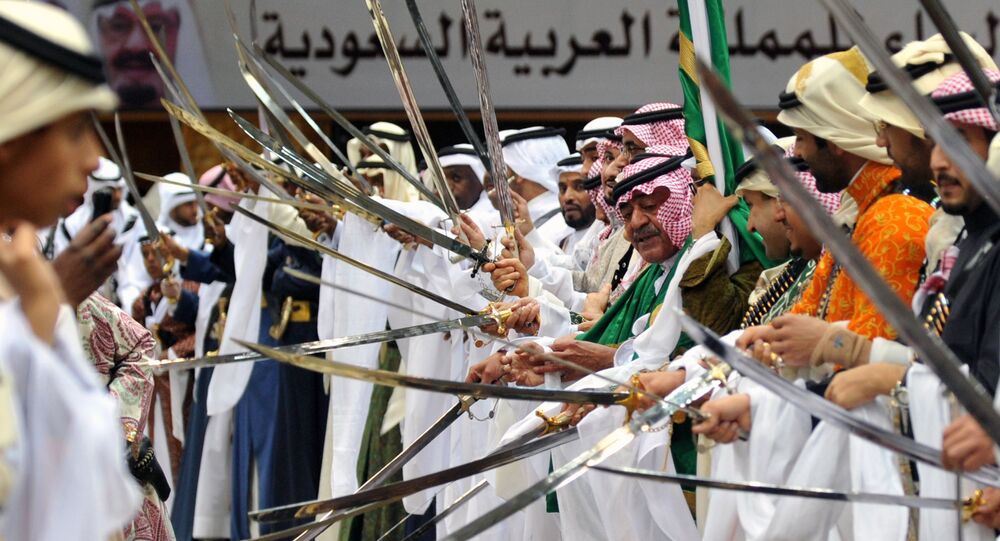 What happens when Washington's allies decide to act on their own? Saudi Arabia is one of the most glaring examples of a US ally tempted to "go it alone," American scholars note.

© REUTERS / Saudi Press Agency/Handout via Reuters
Cracks Appear: Are Pillars of US-Saudi Partnership Trembling?
While US partners in the Persian Gulf are increasingly willing to act on their own, the question arises whether their foreign policy always aligns with Washington's interests in the region, US scholars Renanah Miles and Brian Blankenship underscore in their article for The National Interest.

Miles and Blankenship call attention to the fact that Riyadh has adopted a more active foreign policy: the kingdom unleashed a war against Shiite Houthis in Yemen, announced the creation of a new coalition against Daesh (Islamic State/ISIL) and ignited serious tensions with Iran by beheading Saudi Shiite cleric Nimr al-Nimr.

However, "Saudi Arabia's increasingly assertive posture has already resulted in behavior that arguably runs counter to US preferences. Saudi Arabia has prioritized quashing Shiite Houthi rebels in Yemen over fighting the Islamic State [Daesh] and is openly ambivalent about the nuclear deal with Iran. Behavior that inflames tensions promises to deepen regional conflicts, not resolve them," the scholars emphasize.

© AFP 2021 / HO / AFP SPA
Syria Talks: Another Attempt to 'Buy Time' by Saudi-Backed Opposition?
In response, the US political establishment has not hidden its exasperation at the Saudis: Saudi Arabia's foreign policy agenda does not align with Washington's geopolitical objectives in the region.

The Saudi leadership, however, has turned a blind eye to Washington's displeasure, and has openly criticized the Obama administration's approach to the Syrian crisis, Iran's nuclear deal and the White House's Middle Eastern policy in general.

At the same time Riyadh's international image has deteriorated.

A year has passed since King Salman ascended the throne. Although the monarch pledged to bring peace and stability to the region, something quite the opposite has happened, Naser Schruf of Deutsche Welle remarks in his latest Op-Ed.

"For nearly nine months, Saudi Arabia has been waging a war in Yemen, where destitution and the number of civilian victims are growing. The entire region is becoming increasingly unstable. International human rights organizations accuse the kingdom of serious human rights violations and of using prohibited weapons," Schuf continues.

© Sputnik / Dmitriy Vinogradov
Secret Ingredient: Russian Air Campaign Changes Course of Anti-Daesh War in Syria
At the same time, Riyadh's conflict with President Bashar al-Assad is "developing into fiasco" for the House of Saud. Even though the Gulf kingdom has provided anti-Assad jihadis with enormous financial support, they have not been able to topple Damascus regime.

"Opposition groups backed by Saudis are powerless, internally at odds, and accused of being pro-terrorist," Schruf stressed, adding that Saudi Arabia's international image has never been as bad as now.

Not everything in the garden is rosy for the Saudi economy as well: the country is facing serious domestic problems and social tensions triggered by plummeting oil prices and following austerity measures.

However, Washington did not rush to back its Gulf ally, demonstrating that it is unhappy with Riyadh as much as with Tehran.

"Washington faces trade-offs when it comes to choosing where to step back and let others step forward. Less dependence on Washington is in many ways exactly the point, but it comes at a cost," Miles and Blankenship remark.

While acting on its own, Riyadh should calculate the consequences of its actions and take responsibility for political stability in the region.

The Gulf kingdom should take steps toward mending the situation before it is too late.

According to Schruf, "Salman must swiftly find a way out of Yemen and realign Saudi Arabia's relations with other key countries in the region, such as Iraq, Syria and Iran."