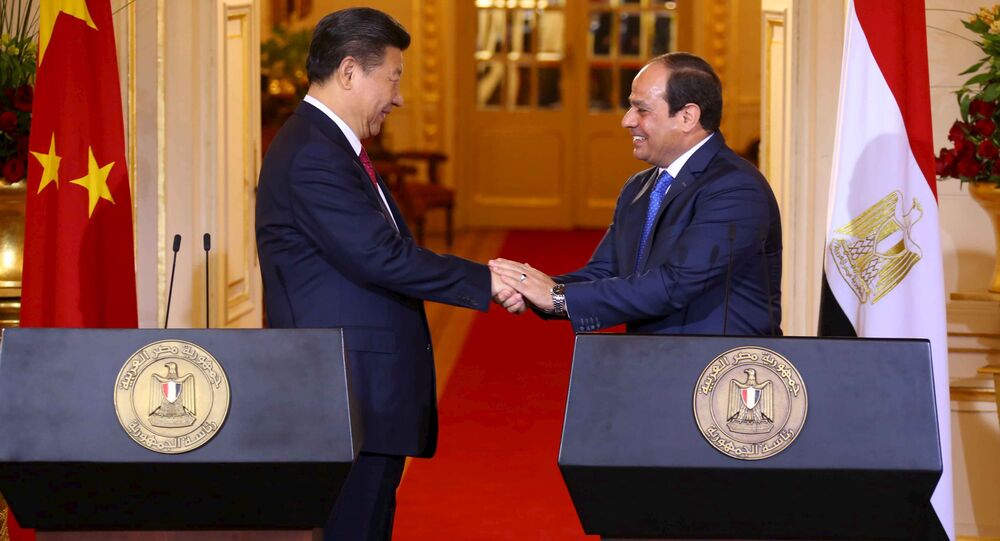 Chinese President Xi Jinping is visiting Saudi Arabia, Egypt and Iran as part of a five-day trip, which has seen Beijing ink billion-dollar deals and boost ties in the Middle East at a time when Washington's presence in the oil-rich region is becoming less pronounced.

Xi's tour is largely focused on economic and energy cooperation with the Arab world, the South China Morning Post noted. But "it is also a mission to forge closer political, diplomatic and military ties with countries and to promote China's image and influence as a global power, resembling what the Middle Kingdom was 2,000 years ago," the newspaper asserted.

© AFP 2020 / LINTAO ZHANG
US Analysts Sweat Bullets as China Moves to Supplant Washington in the Middle East
In addition, China announced that it plans to finalize "a comprehensive free trade agreement" with the Gulf Cooperation Council later this year. The talks on the issue were launched in 2004, but the process was suspended in 2009.

Xi later traveled to Egypt. China's state-run news agency Xinhua described the ties between the two countries as a "comprehensive strategic partnership." Incidentally, the same formula was applied with regard to China's relations with the oil kingdom and Iran.

The two-day visit of the Chinese president to the North African nation produced more than 20 agreements covering civil aviation, electricity, higher education, science, media, banking and trade. The Chinese president also said that Beijing plans to invest as much as $15 billion in Egypt's economy as both countries agreed to promote cooperation under Xi's signature foreign policy initiative, known as the One Belt, One Road.

Xi's tour comes a week after Beijing unveiled its first official strategy towards the Middle East. Known as the Arab Policy Paper, the document called for greater political, economic, energy and security cooperation with the region. Relations between China and the Arab world, according to the brief, should be based on the One Belt, One Road development strategy.

China Expects to Invest Some $15Bln in Egypt, Signing Agreements

China to Provide Humanitarian Aid Worth $35Mln to Mideast Countries