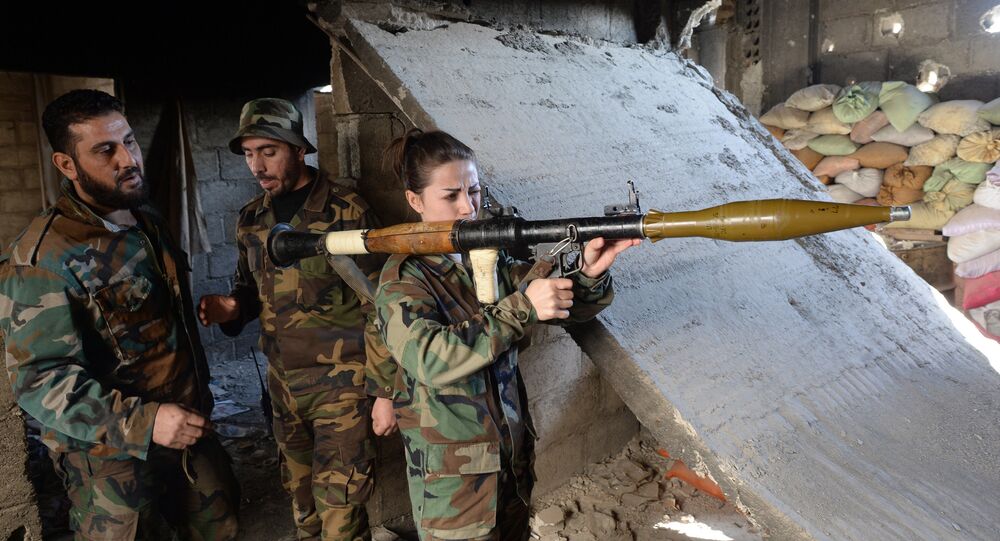 With the winds of fortune blowing in Damascus's favor for a change, and government forces launching a series of offensives to liberate the country from jihadist militants, Syria's regional enemies may attempt to frustrate the Geneva III talks on Syrian peace, Russian political analyst Gevorg Mirzayan warns.

On January 25, UN-led talks on intra-Syrian peace are scheduled to take place between the Syrian government and representatives of the country's opposition in the Swiss city of Geneva.

But as the date moves ever-closer, and some opposition groups begin to cast doubts on the timing of the talks, some analysts are starting to wonder whether it is Syria's regional enemies, rather than local opposition forces, which may be seeking to disrupt the talks. Russian analyst Gevorg Mirzayan is among them.

© AP Photo / SANA
Syrian Talks in Geneva to Go Ahead Despite Opposition Groups' Doubts
In an analysis published in the online edition of the Russian business magazine Expert, Mirzayan recalled that at the moment, "without a doubt, the advantage is on the side of the so-called 'Baghdad Four' – the anti-terrorist coalition of Russia, Syria, Iraq and Iran, plus Hezbollah. In recent weeks, the Syrian army, backed by Russian aircraft and Iranian volunteers, has racked up a series of victories, taking control of large areas in central and northwestern Syria."

Furthermore, the analyst explained, the Syrian government "has managed to liberate some areas not by military force, but through negotiations with local commanders who realized the futility of further resistance."

"The coalition also achieved major successes on an international level. In particular, they were able to push forward a resolution through the UN Security Council on the need to combat the financing of Syrian terrorist groups. The lifting of sanctions against Iran has also played in their favor, untying Tehran's hands and allowing it to invest more resources in Syria. However, one of the most important diplomatic advantages of the coalition is the agreement which has been reached with the Americans, even if it is only a shaky 'framework'."

© AFP 2020 / POOL / LEONHARD FOEGER
Decisive Moment: Final List of Syrian Opposition May Be Formed at Lavrov-Kerry Talks
And While Moscow and Washington continue to have their disagreements on the Syrian issue, in any case, Mirzayan writes, "both sides are now pursuing the same goal: the elimination of Daesh (ISIL/ISIS) and the stabilization of the Middle East via the ending of the Syrian conflict. That is why the US and Russia factually organized the process of negotiations and have done everything to ensure their successful beginning."

Sponsors of Syrian Opposition May Yet Attempt to Disrupt Talks

"The problem," Mirzayan argues, "is that the talks scheduled for January 25 may not start, and not by the fault of the US, Russia or Syria."

"It's no secret that there are several countries in the region which openly sponsor the Syrian militants, including terrorists from the Al-Nusra Front and other terrorist groups. All of them, for various reasons, want to see the Syrian government overthrown, and have not given up on the idea, even following Russia's entry into the war and the lifting of sanctions against Iran, which has severely complicated their task."

For its part, Damascus, the analyst recalls, "insists that it is precisely due to [the actions of] these countries that the civil war in Syria will not die down."

Last week, Syrian Foreign Minister Walid Muallem said that "if these neighboring countries – Turkey, Saudi Arabia and Qatar, were to implement the Security Council resolution to counter terrorism 70 percent of our crisis will be finished, and the remaining 30 percent I promise you would end before the end of this year."

© Flickr / UN Geneva
Syrian FM: 'Riyadh’s Support for Terrorism Hinders Geneva Peace Efforts on Syria'
Ultimately, in Mirzayan's words, "the problem is not only that Turkey and Saudi Arabia will provide the militants money and weapons. The problem is that these states may sabotage the negotiation process, using their clients in the ranks of the Syrian opposition."

"In fact, it is the negotiation process which is the weak point of the 'Baghdad Four'. Without its success a final sweep of western Syria [from the jihadists] will take a long time, while Moscow and Tehran are due to shift all their resources to the fight against Daesh." Now, the analyst notes, Ankara and Riyadh may have "broken that game."

"Ankara shot down a Russian Su-24 and gave some militants the hope that Turkey could send troops into Syria and practically initiate a direct confrontation with the Russian military." Meanwhile, "Saudi defense minister Prince Mohammad bin Salman told the representatives of the Syrian opposition who recently gathered in Riyadh that they would not have to negotiate with Assad, and that they would receive help from abroad."

In the final analysis, Mirzyan argues, "if the Kingdom is able to convince, or simply buy a significant number of moderate leaders among the Syrian opposition, the negotiations process will be disrupted. Yes, [Damascus], Moscow and Tehran will continue to negotiate with individual warlords directly, but such an approach will delay the end of the civil war, something Riyadh would be entirely satisfied with. Time is the Kingdom's main hope, because this year events may occur which could change the balance of forces in the Syrian conflict."

Syrian Talks in Geneva to Go Ahead Despite Opposition Groups' Doubts

Terrorist Groups Must Be Excluded From Opposition Delegation to Syria Talks