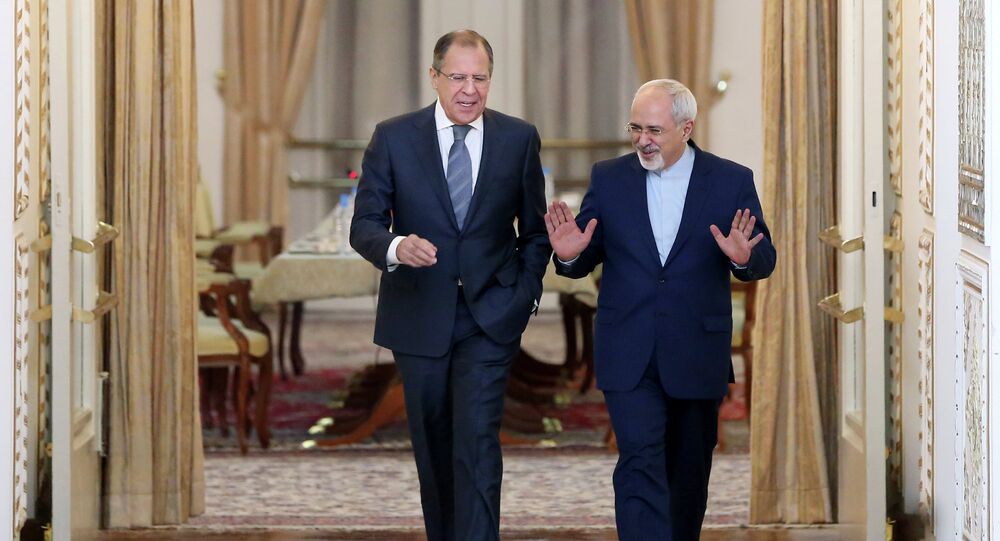 Commenting on the lifting of Western sanctions against Iran, and the possible implications for the Russian-Iranian partnership, Syrian journalist Abbas Juma suggests that however events may unfold, the two countries have a rich history of relations to build on. Moreover, Tehran may yet teach Moscow a thing or two on how to deal with the West.

© AFP 2020 / HANS PUNZ
European Union, US Lift Nuclear Program-Related Sanctions Against Iran
With Western countries dropping most of their sanctions against Iran in recent days, in accordance with the Iranian nuclear agreement reached last year, Juma, in his Sunday op-ed for the independent Russian newspaper Svobodnaya Pressa, suggested that now, Iran may very well become an OPEC leader, doubling its oil exports (to 2 million barrels per day).

Now, with an improvement in relations between Iran, Europe and the United States on the horizon, "Russians," the journalist suggests, "are anxious about the future of Russian-Iranian relations." However, in Juma's view, Moscow has little to worry about.

"Speaking in modern language, Russia began cooperating with Iran even before it was the hip thing to do. Russian-Persian diplomatic relations were established over 400 years ago, under the Ruriks, when the two countries reached a new level of economic and political development." With both countries facing political unification and the formation of unified markets, "each had something to offer the other in various areas."

Still, urging against a rose-tinted view of history, Juma recalls that "in four centuries, Russian-Iranian relations have gone through a lot. There were Russian-Persian wars, and the tragic death of [Russian diplomat and poet] Alexander Griboyedov during the massacre in the Russian embassy in Tehran in 1829 (today the Iranian capital features a monument to the author of the verse comedy The Woes of Wit as a reminder of that terrible day)."

© AFP 2020 / BEHROUZ MEHRI
Iran Ready to Introduce Visa-Free Regime With Russia Within a Week
Moreover, "the Iranian Shiite clergy would christen the atheistic USSR the 'Little Satan' (which did not prevent Tehran from purchasing modern weaponry from the Soviet Union in the 80s). And for fairness' sake, it must be recalled that Russian soldiers too had repeatedly invaded Iranian territory, which did not cause enthusiasm among the locals, to put it mildly."

"But that's how the history flows," Juma writes. "Bright spots alternate with dark clouds, and the process repeats. Thus, while the collapse of the Soviet Union may have had many negative consequences for Russia, Russian-Iranian relations were not one of them. Tehran lost its fear of the 'Little Satan', and pragmatically realized that the resumption of close cooperation with Moscow would bring them great benefits. And that's how things turned out. In 1992, Russia and Iran signed an agreement on the construction of the Bushehr nuclear power plant, and to date an agreement has been reached on the construction of Bushehr II."

"Since 2012," the journalist recalls, "against the backdrop of the crisis in the Middle East, relations between Moscow and Tehran warmed once again, becoming a key topic for discussion in the world. And similarly to how the West once feared the rise of Soviet influence over Tehran, today once again it is attempting to prevent the two rising powers from moving closer together. This is no accident; after all, now more than ever, the idea of a military-political alliance between Iran and Russia, as a counterweight to NATO, is taking shape."

© Photo : Pixabay
Iran Sends Some 500 Trucks With Agriculture Products to Russia
"Consistent, multilateral dialogue with Iran has become one of the main foreign policy directions over the course of Vladimir Putin's presidency. One can only recall that March 2001 saw the signing of the Treaty on the Principles of Relations and Principles of Cooperation Between the Russian Federation and the Islamic Republic of Iran. Today, in accordance with article 18 of the treaty, Moscow and Tehran are cooperating with one another in an attempt to solve major world problems – specifically the Syrian and Iraqi crises."

Russia Could Learn a Thing or Two From Iran

Today, as the West lifts its sanctions against Tehran, while prolonging and expanding them in relation to Moscow, the Russians, Juma suggests, might have a thing or two to learn from the Iranians on how to get back on their feet in spite of Western attempts to isolate them.

© Photo : President of the Islamic Republic of Iran website
Iran Not Chasing US Investment Post-Sanctions – President Rouhani
"Traditionally, the Western 'civilized world' treats countries which attempt to lift up their heads and declare their unwillingness to dance to the tune of others with contempt. It happened with Iran after the 1979 Islamic revolution."

"Then," Juma recalls, "when Mahmoud Ahmadinejad was elected president in 2005, sanctions were imposed against Iran. Under his presidency, due to his country's alleged uranium enrichment program, Iran was subjected to the most severe sanctions pressure the US and its allies could muster."

"Nevertheless, Iran managed to become a leading regional power, which has now forced those who once sought to grind the country into dust to negotiate. Today, as sanctions against Tehran are removed, the Iranians stand before the world proud and independent."

"Their circumstances," the journalist notes, "taught them to be independent – to make everything with their own hands, from slippers to drones. Today, graduates of Iranian schools are becoming Nobel laureates and occupying leading positions in international high-tech centers. In medicine, the country is almost 100% self-sufficient, actively developing its pharmaceutical industry, carrying out difficult operations, and doing without imported equipment."

"Of course, the country has its problems; the banking sector is suffering under the pressure of sanctions, the economy cannot boast of major innovations, and is growing more slowly than we would like. But it's worth remembering the situation the country faced 40 years ago and compare it with the Iran of today. Russia would certainly benefit from studying the Iranian experience in the field of import substitution, given that the West's anti-Russian sanctions, experts confirm, won't be removed any time soon."

At the same time, "the two countries agreed to cooperate in the oil and gas sectors. Thus, Mehdi Hosseini, the Chairman of the Oil Contract Restructuring Committee at the Iranian Ministry of Petroleum, announced in late November that Gazprom and Lukoil have good prospects for receiving access to fields in Iran. At the same time, Oil Minister Bijan Zangeneh expressed his confidence that following the removal of anti-Russian sanctions, cooperation between Moscow and Tehran in the energy sector will continue with a renewed vigor."

"As for the military sphere," Juma recalled, "here, it seems likely that we will see new contracts worth billions of dollars, because given the unstable conditions in the Middle East, Iran needs to modernize its armed forces, which means that Tehran will be extremely interested in Russian weapons."

© AFP 2020 / Sam PANTHAKY
Armored Fist: Russian T-90s Will Be a Welcome Boost To Iran's Tank Corps
The Russian-Turkish scandal too, in Juma's view, is worth mentioning. "Moscow and Ankara had been connected by a multitude of contracts in various areas; therefore Moscow will now be looking for new partners to 'fill the gaps'. Given that Iran is becoming a significant exporter of agricultural products (mostly fruits and vegetables), Russia can easily start buying produce from the Islamic Republic, which, incidentally, is already being done."

Finally, the analyst suggests, "the simplification of the visa regime may also serve as a significant impetus for closer cooperation, and this is a path the two countries have already embarked upon. On November 23, 2015, during Putin's visit to Iran, the two countries signed an agreement on visa-free travel for certain categories of citizens."

In the final analysis, Juma suggests, as anti-Iranian sanctions are removed and relations with Western countries, particularly Europe, improve, Moscow and Tehran "have yet to determine in which areas and to what extent they can cooperate." Urging against an overoptimistic appraisal of the potential for cooperation, the journalist notes that nevertheless, in today's world, the prospects look good.