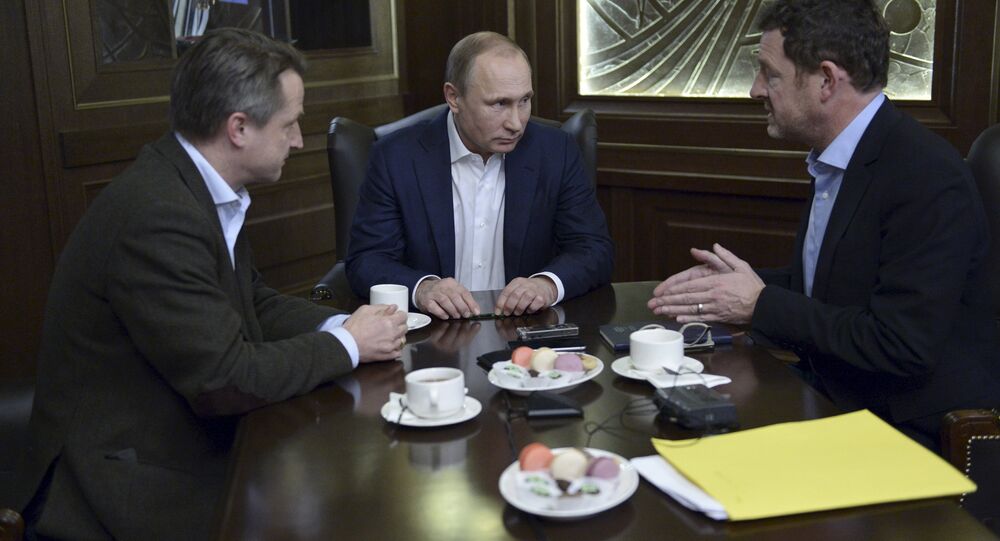 On January 5, Russian President Vladimir Putin gave his first interview of 2016. Journalists from German's leading newspaper Bild asked his opinion on a number of issues. Sputnik has selected ten of the president’s most interesting answers.

"I think this is a foolish and harmful decision," Putin told the newspaper.

"What are the restrictions for us? It is not the most difficult thing we are going through, but it is harmful for our economy in terms of access to foreign financial markets," the president added.

“Crimea is Not Borders and State Territories but Human Beings”

When asked what has already become a traditional question about Crimea, the president replied that for him, the issue of Crimea is not about borders and state territories, but the fate of people.

DMITRY SEREBRYAKOV
Putin 'Did What He Had to Do' to Protect Crimea From Civil War - Lawmaker
“The nationalists’ coup in the Ukrainian capital of Kiev in February 2014 has hugely scared 2.5 million Russian people living on Crimea.”

“So what did we do? We have not gone to war, we have not fired, not a single person was killed. Our soldiers have merely prevented the Ukrainian troops on Crimea from impeding the freedom of expression of the people. In the referendum – which was still decided to take place by the Crimea’s old parliament – the majority of citizens voted to belong to Russia. This is democracy, the people’s will.”

On Major Mistakes After the Collapse of the USSR

The Russian president said a number of "mistakes" committed by the US, Russia and NATO following the break-up of the Soviet Union has led to the current deterioration of relations between Moscow and the West, with NATO's expansion into eastern Europe one of the major damaging factors.

© AFP 2020 / Savo Prelevic
Joint Mistakes, NATO Expansion to Blame for Russia-West Tensions - Putin
“Yes, we have made mistakes! We were too late. If we had presented our national interests more clearly from the beginning, the world would still be in balance today.”

“After the demise of the Soviet Union, we had many problems of our own for which no one was responsible but ourselves: the economic downfall, the collapse of the welfare system, the separatism, and of course the terror attacks that shook our country. In this respect, we do not have to look for guilty parties abroad.”

The Russian leader explained that Russia coordinates its actions in Syria with both the Syrian government-led forces and the opposition, when asked about Russia's air campaign in Syria.

Russian Defense Ministry
Putin: Russia Coordinates Moves in Syria With Both Assad's Army, Opposition
"Are you aware that we support the actions of the armed opposition fighting against the Islamic State? The armed opposition to [Syrian President Bashar] Assad's that is fighting Daesh. And we coordinate our joint actions with them and support their offenses at various parts of the front with airstrikes," Putin told the newspaper.

Sputnik
Putin: Ankara Reaction After Downing Su-24 in Syria ‘Looks Humiliating’
Relations between Moscow and Ankara deteriorated after a Turkish F-16 fighter jet shot down a Russian aircraft over Syria on November 24. Ankara claimed that it downed the jet because it had violated Turkish airspace. Both the Russian General Staff and the Syrian Air Defense Command have confirmed that the Russian jet never crossed into Turkish airspace.

“Certain Powers Use Int'l Terrorism to Fight Against Russia”

"For us it was an obvious fact that the international terrorism was also used as a means of fighting against Russia, while everyone either turned a blind eye on that or provided support to terrorists — I refer to political, information, financial or in some cases even armed support to the actors fighting against the Russian state," Putin said.

On Expansion of NATO

“Back in 2007, many people criticized me for my talk at the Munich Security Conference. But what did I say there? I merely pointed out that the former NATO Secretary General Manfred Woerner had guaranteed that NATO would not expand eastwards after the fall of the Wall. Many German politicians had also warned about such a step, for instance Egon Bahr. “

© Photo : NATO official website
Putin Plays Waiting Game as NATO Presses Self-Destruct Button
“This, for instance, is what Egon Bahr said on June 26, 1990: “If we do not now undertake clear steps to prevent a division of Europe, this will lead to Russia’s isolation.” Bahr, a wise man, had a very concrete suggestion as to how this danger could be averted: the USA, the then Soviet Union and the concerned states themselves should redefine a zone in Central Europe that would not be accessible to NATO with its military structures. Bahr even said: If Russia agreed to the NATO expansion, he would never come to Moscow again.”

“Of course every state has the right to organize its security the way it deems appropriate. But the states that were already in NATO, the member states, could also have followed their own interests – and abstained from an expansion to the east.”

“To Be a Superpower is Far Too Expensive and Unnecessary”

When asked if Russia wants to be a superpower, the Russian leader replied that “we do not claim the role of a superpower for ourselves. That is far too expensive and unnecessary.”

© AFP 2020 / Kirill Kudryavtsev
Merkel Sincere, Professional Person - Putin
“We are still one of the leading economic nations in the world. As far as the concept of a “regional power” is concerned, I would recommend taking a look at a map of the world. In the West, our region is Europe. In the east, Japan and the USA with Alaska are our neighbors. In the north, we share a border with Canada over the Arctic Ocean. If you want to lower the significance of Russia in the world, you actually just want to elevate your own country. That is a mistake.”

German Chancellor Angela Merkel is a sincere and professional person, and the level of trust between Germany and Russia is very high, the Russian President said.

However he added that rather than being an admirer, he “appreciate[s] her as a very professional and open person.”

It is rather premature to speak of granting political asylum to Syrian President Bashar Assad in Russia as only the Syrian people can determine his future, President Putin told the newspaper.

"You know, I think it is premature to discuss this issue. We have granted asylum to Mr Snowden, and it was more difficult than doing the same for Assad will ever be," Putin said.

"We should first let the Syrian people speak. And let me assure you that if everything goes the democratic way maybe Assad won't have to go anywhere," Putin stressed.