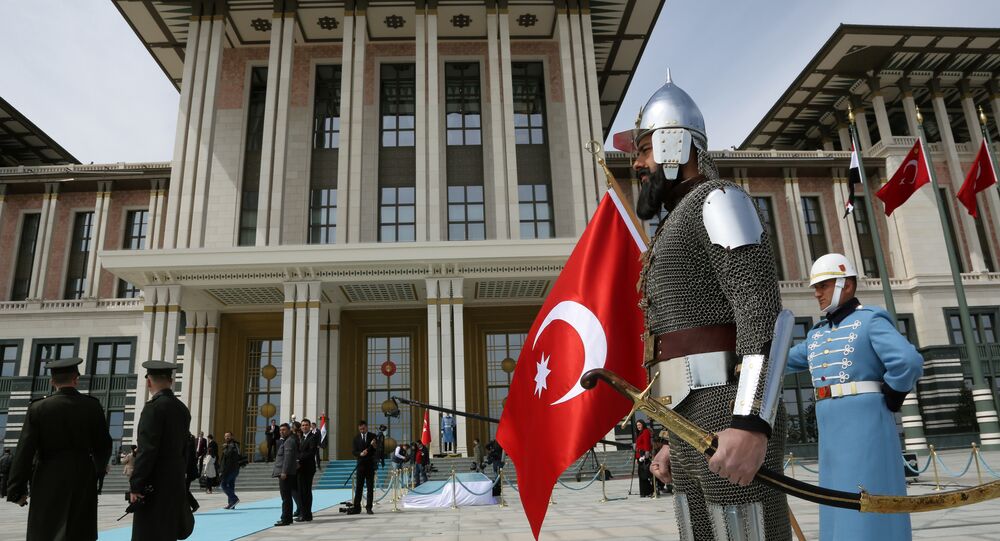 One Hundred Years of Competition: History of Russo-Turkish Relations

To those who know Russian history, Ankara's hostile move in Syria has come as no surprise: over the past hundred years Turkey and Russia have been involved in a longstanding geopolitical competition.

© AFP 2021 / ADEM ALTAN
Is Turkey Waging War on Russia in Crimea, the Caucasus, and Central Asia?
Incredible as it may seem it was Kaiser Wilhelm II of Germany who urged Sultan Mehmed V of Turkey to unleash a "Holy War" (Jihad) against the Russian Empire, Britain and France during the First World War (1914-1918).

On November 14, 1914, Mehmed V declared Jihad against the enemies of the German Reich and the Ottoman Empire.

Besides religious matters, the Ottoman Empire had certain geopolitical interests in gaining control over Russia's Caucasus, the Central Asian and the Volga regions.

Interestingly enough, the Turkish spiritual emissaries made every effort to engage Russian Muslims in the "jihad" against the Russian Empire, but largely in vain. Turkish pan-Islamists had been repeatedly spotted in the Caucasus on the eve of the First World War promoting the anti-Russian sentiment. They also tried to convince the Russian Tartar population to take the side of the Ottoman Empire.

The German leadership in its turn also added fuel to the fire by launching an ideological propaganda campaign and publishing "El-Jihad" newspaper. The outlet addressed Russian Tatars POWs and urged them to join Kaiser Wilhelm II, the self-proclaimed protector of all Muslims.

However, only 1,500 of almost 50,000 Russian Tatar POWs enlisted in German diversionary battalions.

© Photo : Youtube/where can u find gezerbey
Enver Pasha
© AP Photo / Khalil Hamra
'Moderate' Islamism? Washington, Brussels Playing With Fire in Syria, Iraq
On December 22, 1914 a 150,000-strong Turkish military group launched an offensive against the Russian Caucasian Army in the Kars region. Unfortunately for Enver Pasha, the Turkish advance resulted in the disastrous defeat of the Ottoman military forces at the Battle of Sarikamish in January 1915. Russia's victory brought the Turkish dream to stir up the Turkic inhabitants of Russia's southern regions to an end.

However, it is only a part of the story. Russo-Turkish relations thawed in the early 1920s after the Bolsheviks came to power in Russia in October (November) 1917. The First World War dealt a heavy blow to the Ottoman Empire leading to the country's partitioning. In April 1920 Turkish national leader Mustafa Kemal Pasha (dubbed later Ataturk) sent an official request to Vladimir Lenin, the head of the Bolshevik Party, asking to establish diplomatic relations between Soviet Russia and Turkey. Needless to say, Lenin met the proposal with enthusiasm — the Soviet government was at the time seeking new geopolitical allies.

The Soviets helped the Turkish state to delineate the borders between Turkey and Armenia and Iran.

In accordance with the Kars Treaty signed on October 13, 1921, between Turkey, Soviet Azerbaijan, Soviet Armenia and Soviet Georgia, Kemal Pasha received the infamous Kars region, Ardagan and Artvin. The treaty was preceded by a similar agreement signed by the Kemalists and Soviet Russia. The Soviet government also provided the Turks with considerable financial aid in gold. In August 1921 General M.V. Frunze assumed the post of a Soviet Ambassador to Turkey and became Ataturk's close military adviser.

© AFP 2021 / ADEM ALTAN
'Pasha' Erdogan's Road to Power in Turkey Paved With Repression and Terror
In order to support Turkey in its war against "imperialist powers" the young Soviet Russian Republic supplied to the country about 39 000 rifles, 327 heavy machine guns, 54 big cannons, 63 million bullets, 147 000 artillery shells as well as necessary raw materials and powder. Soviet military experts and instructors were deployed to Ankara.

However, relations between the states started deteriorating in 1936 during negotiations over the status quo of the Bosporus Straits and the Dardanelles. The Straits were placed back under the control of Turkey. Moscow believed that Ankara would provide it with additional preferences given the close cooperation between the countries during the Turkish War for Independence. Alas, the Soviet government's wishes had not been met.

Indeed, in the late 1930s, after the death of Ataturk, Turkey adopted a new political course and turned to its old ally — Germany. In the 1930s Nazi Germany became Turkey's major trading partner.

On June 18, 1941, after the Second World War began, the German-Turkish Non-Aggression Pact was inked in Ankara by German ambassador to Turkey Franz von Papen and Turkish Minister of Foreign Affairs Sukru Saracoglu. Under an agreement signed in September 1941 Ankara sold Chromite ore, a strategic metal, to Nazi Germany up until 1944. Furthermore, Ankara allowed German warships to cross the Straits under the official guise of commercial vessels during the course of the war.

Although then-Turkish president Ismet Inonu proclaimed a policy of neutrality, a considerable number of Turkish senior nationalist policymakers raised their voices urging Ankara to start "crusade" against the USSR and Bolshevism.

© AP Photo / ADEM ALTAN
Turkish Grey Wolves: Forgotten Story of Cold War-Era Paramilitary Group
The supporters of the so-called Pan-Turanian movement dreamt of establishing control over Soviet Central Asia and the Volga region inhabited by Turkic population and most notably the rich oilfields of the Caucasus. In a word, nothing had changed much since the First World War. Needless to say, Nazi Germany courted the Turkish Pan-Turanists.

Interestingly enough, the Turkish "wish list" included not only the USSR's territories, but also northern Syria, Aleppo and Mosul.

Historians call attention to the fact that according to an additional secret agreement to the Turkish-German non-aggression pact Turkey was expected to enter the war against the USSR when Nazi Germany captured the Soviet strategic city of Stalingrad. In mid-1942 twenty-six Turkish divisions were concentrated on the border with the Soviet Union.

However, the Soviet advance against Nazis dealt a blow to Pan-Turanists' plans. In 1944, Ankara changed its political vector again, and cracked down on Nazi-supporters inside the country. Furthermore, in February 1945 Turkey officially declared war on Nazi Germany, however not taking part in any fighting.

During the Cold War era Ankara continued to pursue anti-Soviet policies. In 1952, Turkey joined NATO and took part in the CIA's clandestine Operation Gladio aimed against the USSR and the Warsaw Pact countries. Turkey's Counter-Guerilla forces, including Turkish nationalists Grey Wolves (Bozkurtlar), carried out paramilitary training of the Turkish youths, conducted terror acts against the Kurdish left parties and spread anti-Soviet sentiment. Turkish nationalists proclaimed the creation of Great Turan and the dissolution of the USSR as their primary objective.

After the collapse of the USSR, Turkish nationalists once again attempted to spread their influence over former the Soviet Republics and regions — the Caucasus, the Central Asia, the Volga region and Crimea. As for Ankara's Middle Eastern policies, its ambitious plans predictably include the Iraqi Mosul, where Turkish troops have been recently deployed, and northern Syria.