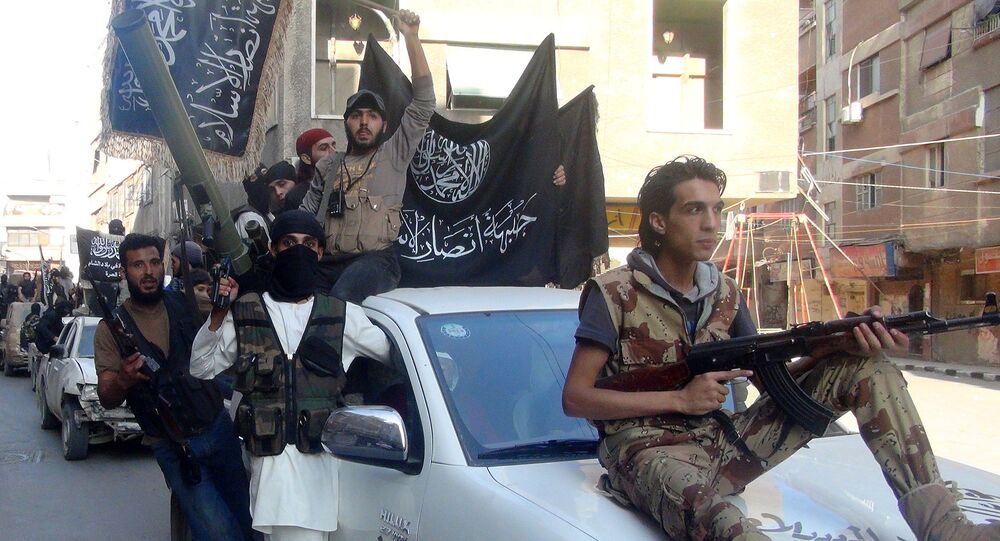 Commenting on Saudi Arabia's announcement that it had created a 34-member 'Islamic coalition against terrorism', Turkish journalists and analysts suggest that a country which is responsible for creating Islamist terrorism as we know cannot be relied upon to fight it.

With Iran, Syria and Iraq conspicuously missing from the new coalition, despite the fact that the war against Daesh (ISIL) and other jihadist terrorists is taking place primarily on Syrian and Iraqi territory, commentators from around the world have suggested that the new alliance may have ulterior motives. In Turkey, a member of the new Saudi coalition, several journalists have taken on the brave task of criticizing their government's moves despite more and more heavy-handed approaches to press censorship.

"Against what background has this new alliance been created?" Can Ugur, a journalist for the Turkish daily newspaper BirGun, asks. "If we take a look at developments in the region, it becomes clear that countries such as Saudi Arabia, Qatar and Turkey do not have any problems with jihadism. The very name of the coalition 'the Islamic anti-terrorist coalition', reveals its true nature."

© AP Photo / Hassan Ammar
Riyadh Under Pressure: Saudi Arabia Hostage to Its Own Policy in the Region
Speaking to BirGun, Goksu Ugurlu, a researcher at Ankara's Hacettepe University, warned that the Gulf state-dominated coalition's real goal may be to strengthen the so-called 'moderate jihadists' fighting in Syria.

"Turkey's decision to join the Saudi-led 'Islamic anti-terrorist coalition' is an important event, given the controversy which has flared up recently. The coalition was announced soon after President Obama's statements that the United States was waiting for strong support, including military assistance, in the war against terrorism from countries in the region. It is likely that these countries (and especially the members of the Gulf Cooperation Council) felt pressured by Obama's statements."

"Among Obama's remarks was one important point – coming in the form of a threat against the countries which have been charged with supporting terrorist groups. Of course, countries in the region had been told previously that the Western coalition cannot approve of support for jihadist groups in Syria." Still, despite the fact that "the countries of the region could have been pressured to form a coalition by the US administration, the result will not necessarily be what America wants to see."

According to Uruglu, the Saudi-led coalition will likely work to try to legitimize the so-called 'moderate jihadists', turning them into a 'legitimized opposition'. However, when one considers the records of the Gulf countries and Turkey in supporting the jihadists, the analyst notes, "a clear picture is formed."

"The creation of the coalition led by Saudi Arabia may have the following goal: to avoid seeing the 'moderate jihadists', who enjoy considerable support from countries in the Persian Gulf, and from Turkey, be placed on the list of 'terrorists' in Russia and the West."

In Syria, Uruglu noted, "it is quite possible that the Saudis will try to present the Islamist groups there as the legitimate opposition. Examples of such 'moderate jihadists' include the Turkmen, on whose presence Turkey justifies its presence in Syria. Therefore, we may assume that this is an attempt, 'under the banner of Islam'…to have an impact on the reconstruction of the region separate from the West, with an emphasis on ideological and regional differences."

"Recently, very skeptical articles have been appearing in Western media about Saudi Arabia, stressing that very little really separates the Saudis from Daesh. In the USA and Europe, people have been asking themselves questions like, 'what is the difference between Daesh and the regime in Riyadh, which rules on the basis of Wahhabi ideology, is known for cutting off heads, medieval obscurantism,  and which treats its women as second class citizens?'"

Riyadh's coalition, Ozkan suggests, "is Riyadh's attempt to present itself as the leader of the Islamic world, which together with 33 other countries, has created a military alliance to fight terrorism." In other words, he suggests, this is Riyadh's attempt "to fix its image."

At the same time, the professor emphasizes that "expecting Saudi Arabia, who holds the primary responsibility for the civil wars in Afghanistan, Syria, Iraq and Libya, to now work to solve the problems it has created, is unrealistic. This is a strategic move. Moreover, the coalition does not include Iran. This means that with this maneuver, the Saudis are, on the one hand, creating an anti-Iranian bloc, and on the other hand, openly showing that they are the leaders of the Islamic world."

Noting that "the US and Europe will undoubtedly approve this step," Ozkan laments that "in supporting Saudi Arabia, which personifies the crisis of the Islamic world in every sense of the word, Western leaders are only making the situation more hopeless."

"What are Saudi Arabia's values? What kind of political system would appear in Syria, Iraq and Libya under Saudi leadership? To leave the solution to the problem in the hands of a totalitarian Saudi regime is to engage in self-deception," the professor added.

"Another problem," Ozkan pointed out, "is the fact that over 30 Islamic countries have joined Riyadh. In the 1960s such a thing would be impossible to even imagine. What can a Kingdom bogged down in corruption possibly offer to the Islamic world?"

Riyadh Under Pressure: Saudi Arabia Hostage to Its Own Policy in the Region