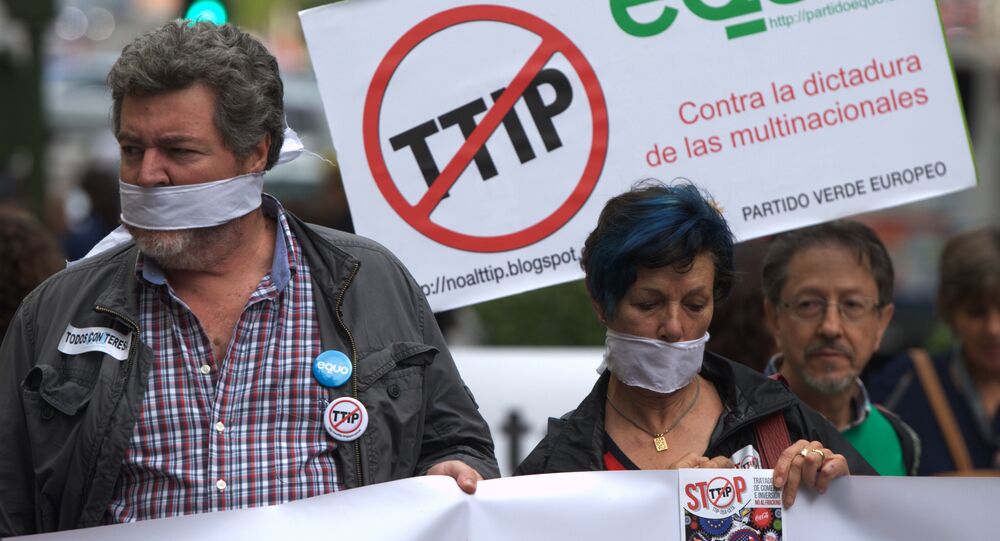 Sol Sanchez, the party candidate of the Spanish United Left-Popular Unity coalition said that his party is categorically against signing free trade deals with the United States and Canada.

© REUTERS / Axel Schmidt
EU Aims for Free Trade Deal With US by End of Obama's Presidency - Merkel
MADRID (Sputnik) – The Spanish United Left-Popular Unity coalition does not support the free trade deals the Euorpean Union is negotiating with the United States, the party candidate for the country’s parliament said.

"We categorically do not support the EU style and agenda in relation to not only Russia but other countries too. We are categorically against signing free trade deals with the United States and Canada," Sol Sanchez told RIA Novosti.

The politician made the statement ahead of the parliamentary elections in Spain, scheduled for Sunday.

The Transatlantic Trade and Investment Partnership (TTIP) is a proposed free-trade deal between the European Union and the United States. The agreement which has been criticized for its unusual secrecy, is opposed by many Europeans who claim that the pact would undermine standards and regulations on environmental protection, health and safety, as well as workers’ rights, among other points.

© Flickr / Campact
Some 100,000 Protest in Berlin Against EU-US Free Trade Deal
The 12th round of US-EU talks is due to be held in early 2016 with the aim of drafting the full text of the agreement before the end of the year.

The Comprehensive Economic and Trade Agreement (CETA) is a similar agreement between the European Union and Canada.

Almost 3.3 million Europeans signed a petition against the two deals.

Some 100,000 Protest in Berlin Against EU-US Free Trade Deal